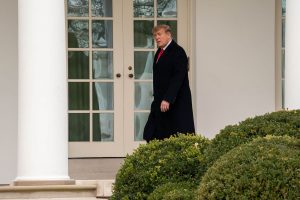 Republican lawmakers in Washington are fracturing over President Donald Trump’s futile effort to persuade Congress to overturn his re-election defeat, as his allies spar with conservatives who say the Constitution doesn’t give them the power to override voters.

Trump further undermined his case after he asked Georgia’s secretary of state on Saturday to “find” the nearly 12,000 votes he’d need to overcome President-elect Joe Biden’s victory in the state — a call some Democrats say would amount to another impeachable offense by the outgoing president.

The drama is unfolding on the eve of Senate runoff elections in Georgia that will decide control of the chamber for the next two years. Trump and Biden will each rally in the state on Monday.

Biden’s victory will be affirmed Wednesday in a joint session of Congress in which lawmakers count electoral college votes for the two presidential candidates, bringing the 2020 election to a formal end. But the event — usually a brief, ceremonial affair with few theatrics — is poised to become another flashpoint in the nation’s divisive politics, as at least 12 Republican senators say they’ll join dozens of colleagues in the House in objecting to votes from several closely fought states where Trump has claimed, baselessly, that fraud cost him the election.

The objections will mean a vote by both chambers of Congress to accept the electoral college results from each disputed state, forcing Republican lawmakers to go on the record either supporting Trump’s claims or defying the outgoing president. The ramifications may echo well into the future, as the internecine GOP debate has pitted potential contenders for the party’s 2024 presidential nomination against one another.

There is little doubt that Biden’s victory will be affirmed, as Democrats control the House and several Republican senators have already said they won’t support the objections.

Outside the Capitol, thousands of Trump supporters are expected to be on the streets of Washington in protest. They are likely to be met by counter-protesters, raising the prospect of violence between the sides. “I will be there,” Trump said Sunday in a tweet.

His call on Saturday to Georgia’s secretary of state, Brad Raffensperger — a Republican whose office administers the state’s elections — has fueled the simmering feud among Republicans over objecting during the count of electoral college votes.

“This is absolutely appalling,” Illinois Representative Adam Kinzinger, a Republican who is a vocal Trump critic, said of the call in a tweet. “To every member of Congress considering objecting to the election results, you cannot — in light of this — do so with a clean conscience.”

Wyoming Representative Liz Cheney, a top House Republican who has occasionally criticized Trump, said the call was “deeply troubling” and that Americans should listen to it in its entirety.

Even a Trump ally, Tennessee Senator Marsha Blackburn, was critical.

“This call was not a helpful call,” she said on Fox News Monday morning. She has said she will support objections to electoral college results.

Trump himself has warned that the standoff over the November vote could damage the campaigns of the two Republicans in Tuesday’s election, Senators Kelly Loeffler and David Perdue. He has attacked members of his party who acknowledged that Biden won.

“I was disappointed at the tone, at the intent, at the questioning. I’ve continued to encourage everybody, including the president, to stay focused on tomorrow,” he said in a CNN interview on Monday. “That phone call did absolutely nothing to help drive turnout for Republicans here in Georgia.”

The call was weeks in the making. The White House switchboard had previously placed 18 calls to a press phone line in Raffensperger’s office, but didn’t get through because an intern monitoring the line thought it was a prank, one official familiar with the matter said. The official asked not to be identified because of the sensitivity of the issue.

They connected Saturday, with Trump repeatedly pressuring and cajoling Raffensperger to alter the results of the Georgia election he lost by nearly 12,000 votes. Trump outlined allegations, largely anecdotal and conspiratorial, that he said he’d detail during his rally in the state late Monday.

Raffensperger and his staff told the president there was no evidence for any of his claims. The secretary of state said Monday he didn’t want to have the call, in part because of ongoing litigation by Trump’s campaign and its allies.

“I never believed it was appropriate to speak to the president,” he told Good Morning America. “We’ve been fighting the rumor whack-a-mole. And it was pretty obvious very early on that we’d debunked every one of those theories that had been out there, but President Trump continues to believe them.”

Gabriel Sterling, a Republican and Georgia’s voting system implementation manager, on Monday refuted the conspiracy theories about fraud that Trump raised on the call.

Surveillance video clearly shows there were no secret suitcases of ballots, and Trump and his allies are intentionally misleading the country about it, Sterling said. There was no multiple scanning or shredding of ballots. There were not thousands of underage, out-of-state and dead voters or felons voting.

“This is all easily provably false, yet the president persists,” Sterling said during a press conference in Atlanta.

Trump’s assertion that an election he lost by millions of votes was somehow rigged against him will be settled decisively on Wednesday, but not without turmoil for the party he leads.

Dozens of Republicans in the House are expected to object to the certification of the electoral college results. The proceedings will put a spotlight on Vice President Mike Pence, who will preside over the vote count. Some party activists have even claimed Pence can single-handedly change the outcome of the election by refusing to count votes from contested states.

During a campaign rally in Georgia on Monday, Pence touted accomplishments of the Trump administration and nodded at the opportunity to hear evidence of election irregularities during Wednesday’s event. But the vice president made almost no mention of Trump’s claims of widespread fraud, and he merely chuckled after his audience broke out in chants of “four more years.”

Other Republicans say Congress is powerless to override states, and that the effort defies conservative values and the Constitution. Senate Majority Leader Mitch McConnell and his top deputies opposed the effort to object to the electoral college count, while House Republican leader Kevin McCarthy, a top Trump ally, has remained silent on whether he supports it.

“I don’t think we have the discretion to decide whether we like the result in any particular state,” Representative Ken Buck, a Colorado Republican, said Monday on Fox News. He and six other conservatives issued a statement Sunday calling on Republicans to refrain from objections.

“Be careful — because the next Republican president that gets elected with a Democrat House and a Democrat Senate will be under the unfortunate precedent of Democrats being able to reverse that election,” he said.

One of the statement’s other signatories, Thomas Massie of Kentucky, said in an interview that he was under huge pressure from donors and constituents to support the objections, but that he would not.

“I don’t think I’ve had this many phone calls in eight years,” he said.

The House objections will be supported by several potential contenders for the 2024 GOP nomination, including Josh Hawley of Missouri, the first senator to say he would join the House Republicans, and Senator Ted Cruz of Texas, who led a group on Saturday that announced its own opposition to certification.

But another potential 2024 candidate, Senator Tom Cotton of Arkansas, said he would support certification, arguing that the gambit could weaken the Electoral College and open the door for Democrats to reject future elections they lose.

“Democrats could achieve their longstanding goal of eliminating the Electoral College, in effect, by refusing to count electoral votes in the future for a Republican president-elect,” Cotton said. “Objecting to certified electoral votes won’t give him a second term — it will only embolden those Democrats who want to erode further our system of constitutional government.”