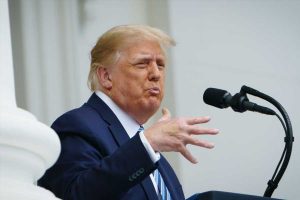 The revelations keep on coming from Mark Esper’s new book about his time in the Trump administration. Politico on Monday morning published a new excerpt from A Sacred Oath, in which the former defense secretary expounds on the unhinged ideas Trump incessantly pushed and the efforts of those around him to convince the president to pursue more reasonable options. One such idea was to shut down the U.S. embassies in Africa.

“Shut down the embassies in Africa,” Esper writes that Trump said said, noting that he did so regularly. “Bring our people [U.S. diplomats] home.”

Trump hasn’t exhibited very much much affection for Africa’s 50-plus countries since entering politics. He famously described African nations as “shithole countries” during an immigration debate in 2018, drawing widespread condemnation. Michael Cohen, the former president’s former attorney and fixer, alleged during testimony, as well as in his own memoir, that Trump had previously asked him if he could name a country run by a Black leader that wasn’t a “shithole.” Trump also, of course, largely launched his political career on the racist idea that Barack Obama was secretly born in Africa.

Esper writes the A Sacred Oath excerpt published by Politico on Monday that he tried to rebut this and other “outlandish” ideas with “facts, data and arguments,” but that this only irritated Trump. He notes that Trump also wanted a “complete withdrawal of U.S. forces from South Korea,” the nation that abuts the dictatorship run by Kim Jong-un, whom Trump has praised repeatedly.

Esper is in the middle of an extremely busy promotional tour for A Sacred Oath, which is out Tuesday. He recently sat down for an glossy interview with 60 Minutes during which he spoke at length about the “bad” and “dangerous” moves Trump was pushing ahead of the 2020 election, and how he and others in the Trump administration had to work to convince the president to reconsider. He listed Trump’s desire to take military action against Venezuela, to strike Iran, and to blockade Cuba.

“It seemed every few weeks something like this would come up and we would have to swat him down,” Esper told 60 Minutes.

During his extended media tour, Esper has positioned himself as a check on Trump’s excesses and madness. That may be true, but he could have spoken out about Trump well before the summer of 2020. It’s also true that Esper willingly agreed to serve in the Trump administration despite the former president’s history as an erratic racist with authoritarian ideas.

Speaking of which, The New York Times reported last week that Esper writes that Trump suggested in the summer of 2020 that Black Lives Matter protesters demonstrating outside the White House should be shot. The Times reported a few days later that Esper also wrote that Trump wanted to launch missiles into Mexico to destroy “drug labs.”

60 Minutes sent a list of questions to Trump about Esper’s claims. He responded to most of them by alleging “Fake News” and attacking Esper as a fake Republican who is “incapable of leading.” He refrained from making any such allegations or attacks in his response the question about whether he suggested launching missiles into Mexico.