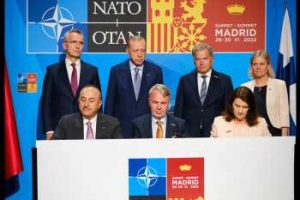 Turkey has dropped its opposition to Finland and Sweden’s NATO membership bids, removing a major block to the two Scandinavian nations’ chances of joining the alliance.

The crucial breakthrough occurred on Tuesday when the leaders of the three countries agreed a trilateral memorandum to address Türkiye’s legitimate security concerns.

In that meeting, the leaders of the three countries also agreed to enhance their cooperation on counter-terrorism, including full support from Finland and Sweden to combat “terrorist” activity.

Both Sweden and Finland’s refusal to extradite Kurdish militants who Turkey describes as terrorists has been a stumbling block in their NATO membership progress.

Turkish President Erdogan insisted that Sweden should not expect Turkey’s support to approve its Nato membership bid without returning “terrorists”.

The Kurdistan Workers’ Party (PKK), a Kurdish separatist group has been fighting Turkish forces for more than four decades.

The memorandum was signed by the foreign ministers of the three countries.

Finland and Sweden have simultaneously handed in their official letters of application to join the North Atlantic Treaty Organization on May 16.

At the two-day NATO summit, which kicked off in the Spanish capital on Wednesday, leaders will decide whether to invite Finland and Sweden to join the security alliance.

Even if the North Atlantic Council approves the applications for NATO membership, it requires ratification by all the countries of the 30-member bloc.

U.S. President Joe Biden will join other leaders at the meeting of the North Atlantic Council at the level of Heads of State and Government at 9 AM ET Wednesday.

Later in the day, he has scheduled a meeting with Turkish President to discuss the Alliance’s collective defense and security and a range of issues important to the bilateral relationship, the White House said.

In a message congratulating the signatories to the trilateral memorandum, Biden said Finland and Sweden are strong democracies with highly capable militaries. Their membership will strengthen NATO’s collective security and benefit the entire Transatlantic Alliance, according to him.

“I look forward to working with NATO Secretary General Stoltenberg, our Allies, and with Congress to ensure that we can quickly welcome them into our Alliance,” Biden added.