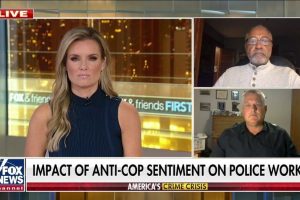 Minneapolis crime soars, police back off amid defund movement

In 2020, America saw videos of widespread looting, arson and violence in cities across the country.

Despite that, a new narrative claims that crime actually fell last year.

The data show a complex pattern, reflecting both a fall in common property crimes due to people staying home during the pandemic, and also big increases in violent crimes and murders, which spiked along with unrest surrounding the killing of George Floyd.

The NBC News coverage was based on a report by Third Way, which bills itself as a “think tank that champions modern center-left ideas.”

Their report looked at 22 states, and combined seven different types of crimes – ranging from theft, to assault, to murder – all into one “overall crime” number, which NBC News then reported on.

But the statistic is “misleading at best,” Charles Fain Lehman, who works on the Policing and Public Safety Initiative at the Manhattan Institute, told Fox News.

That’s because thefts are about four times more frequent than violent crimes, so the researchers’ decision to combine theft and violent crime together into one number, and to focus on that, effectively hides the rise of violent crime in cities.

“The trend in the total number of crimes is mostly the trend in larceny-theft … it’s not a particularly useful statistic,” Fain Lehman noted.

The reports acknowledged that murders and assaults rose, but their headline statistic buried the rises, as well as major differences between big cities and small towns.

1. Assault and murder in American cities spiked after George Floyd’s death in May 2020

The report by Third Way provides only year-to-year comparisons. Yet a closer look at the data shows that violent crime rose just as protests over police actions hit a fever pitch.

The following graph from the National Commission on COVID-19 and Criminal Justice covers 18 American cities and goes from January 2017 to March 2021. It shows that every summer, there is a spike – but that the spike in 2020 dwarfed other spikes. 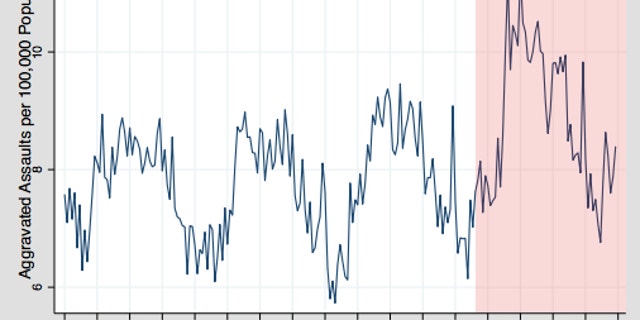 “Many cities saw spikes in the level of violence … in the immediate aftermath of George Floyd’s death and the ensuing protests,” Fain Lehman explained.

While assault levels remained normal during the first months of the pandemic, they rose after Floyd was killed on May 25, 2020. 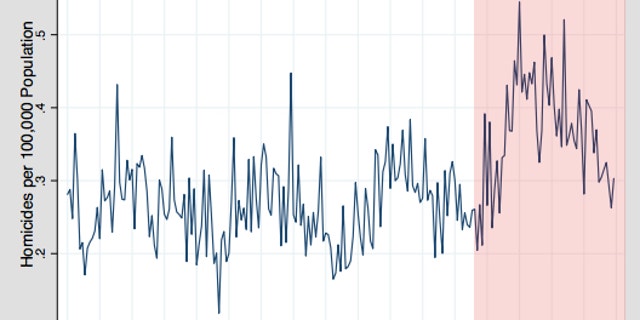 Assault and murder stayed high throughout the year. It also has not yet come back down in 2021, based on preliminary data from the FBI covering some 150 cities during the summer.

Preliminary FBI data for 2020 show a big disparity in how different areas fared. Cities with more than a million people saw a 3.9% rise in violent crimes, and those with between 500,000 and a million saw a 5.8% rise. Towns with fewer than 10,000 residents saw a decrease of 5.2%. Large cities had more “defund the police” movements and related activism.

Yet the Third Way report ignored differences between city and countryside, and focused on the state level. The report looked at the party affiliation of the governors of the 22 states it considered and concluded that states with Republican and Democratic governors did not have different crimes results.

The report also concluded, based on state-level legislation and executive orders, that “the early data does not indicate any correlation between police reforms and crime trends.”

But “it is misleading to focus on the states — most criminal justice decision-making happens at the local level,” Fain Lehman said, where mayors and police chiefs make the most important calls. He added that Third Way’s measure of Republican/Democrat states was bizarrely simplistic.

“It’s just odd to differentiate ‘blue’ and ‘red’ states by governor’s party, a method of analysis that labels Massachusetts red and Kansas blue,” he noted.

Third Way did not respond to a request for comment from Fox on Monday.

“When police are sent a message that they are not going to be given a fair shake, they are going to be much less likely to be proactive and do what’s needed to decrease crime,” he said. In Minneapolis, after Floyd was killed, police stops fell to just one-third of their previous level. In many cities, prosecutors also became more lenient.

Those changes “lowered the cost of breaking the law,” Mangual said.

3. Less-serious property crimes are down, thanks to the pandemic

The graph below shows that larceny (meaning thefts that don’t involve force or a break-in) fell as soon as the pandemic lockdowns began. 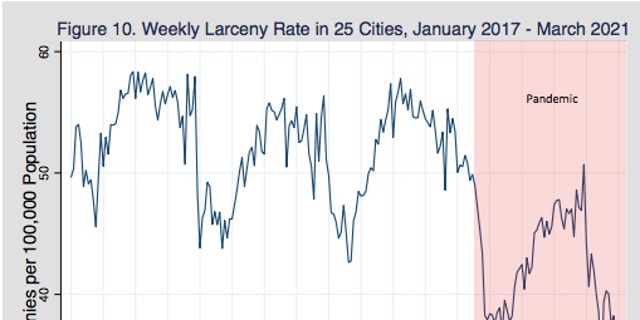 Nonresidential burglary showed a shocking spike during the looting surrounding the Floyd protests – but it had a negative trend afterward. 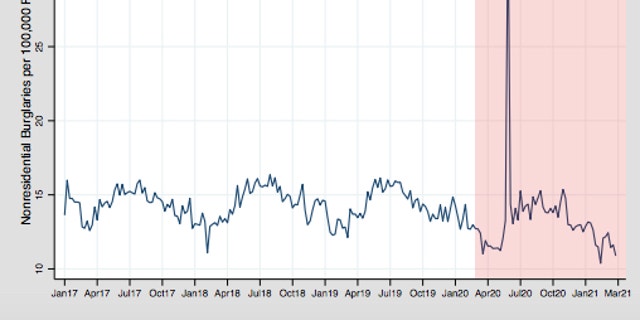 Theft in general fell during the pandemic because “people went home, and stores closed, reducing the opportunities for theft,” Fain Lehman said. Homes were also more likely to be occupied, so residential burglary fell as well.

“It’s a common tactic among people who don’t want to make room for a discussion about more law enforcement as a solution,” he said.

“The crimes that we ought to most care about are absolutely up,” he added.

Maxim Lott writes about data at his site Maximum Truth, is the executive producer of Stossel TV, and created ElectionBettingOdds.com