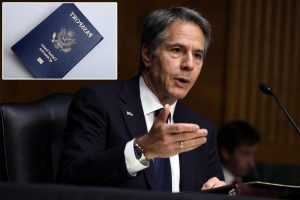 Applicants for a US passport will now be able to choose whether they identify as male or female and won’t need medical certification if their choice differs from the gender listed on other documents like a birth certificate, Secretary of State Antony Blinken announced Wednesday.

Blinken also said that the Department will soon give applicants the option of describing themselves on their passport as “non-binary, intersex, and gender non-conforming,” though he added that change would take time to implement due to “extensive systems updates.”

According to Blinken, the moves are another step “toward ensuring the fair treatment of LGBTQI+ U.S. citizens, regardless of their gender or sex.” America’s top diplomat added that he was announcing the move “after considerable consultation with like-minded governments who have undertaken similar changes.”

“Improved access to accurate passports will have such a profound impact on the lives of trans, intersex, and non-binary folks across the country,” ACLU campaign strategist Arli Christian said in a statement. “Now people will be able to fill out a passport application and indicate M, F, or X — whichever is most appropriate for them.

Despite a hateful wave of anti-trans legislation this year, trans, non-binary, and intersex people know who we are and we need recognition of who we are — not permission,” Christian added. “Today’s action demonstrates an important first step in realizing a whole-of-government policy for accurate IDs.”

Wednesday’s announcement was the latest acknowledgment of the LGBTQ community by Blinken. In April, he authorized US diplomatic missions to fly the rainbow-colored Pride flag on the same pole as the American flag at embassies and consulates around the world. Last week, Blinken announced the State Department would fly the “Progress” flag — which incorporates a black, brown, light blue, pink and white chevron into the pride flag design — for the first time ever to mark Pride Month.