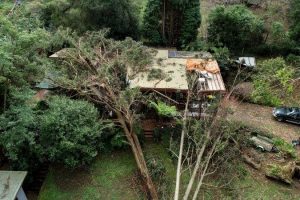 Victoria’s top cop says he is disgusted by looting that has been occurring in storm-affected areas, describing it as a “dog’s act”.

Extra police have been deployed to storm-affected areas north-east of Melbourne after five generators were stolen and there were three burglaries in the Healesville and Mount Evelyn area over the past ten days. 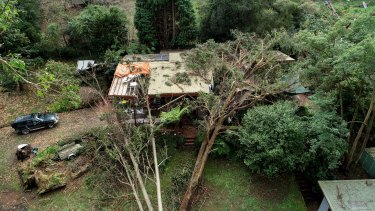 A damaged home in Kalorama after five trees crashed into it during this month’s storm. Credit:Joe Armao

“Who goes and knocks off generators and breaks into houses that are vacant because of storm damage? It’s just disgusting,” Chief Commissioner Shane Patton told radio station 3AW on Thursday.

“We’re urging the public obviously to make sure that if they have any information to come forward, let Crimestoppers know.”

Local police have been tasked to keep an eye on properties they know are vacant or uninhabitable, and investigators are looking into the incidents which have occurred.

“It’s just disgraceful … where’s the humanity of anyone who would actually do something like? It’s just indescribable actually,” said Mr Patton.

He said that the offending would be classified as burglary or theft, but noted that in his experience magistrates and judges generally have been harsher in their sentencing in similar circumstances.

“It’s a standard charge of theft but they take into account … the circumstances,” he said.

The storms and floods that began on June 9 wrought devastation in much of the state, leaving many homes uninhabitable.

Emergency authorities are preparing for rain of up to 10 millimetres in the Dandenongs on Friday, which could compound damage to unstable trees and roads.

On Wednesday, energy distribution company AusNet Services said 1434 households and businesses remained without power. They are all in the Dandenong Ranges apart from 15 in Gippsland.

More than 120 ADF troops hit the ground in the battered Dandenong Ranges on Monday, distributing generators to hundreds of people still without power, 12 days after the devastating storms.

The majority have been stationed in the hardest-hit Dandenong Ranges, where navy, army and airforce personnel have been handing out generators to residents without power.