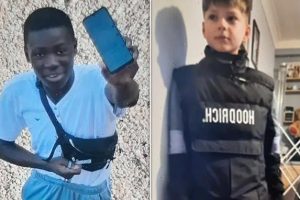 Two young boys went missing this morning and police said they were concerned about their welfare as temperatures drop below zero.

Stanislaw Topa, 13, and Solomon Agyemang, 12, were last seen together at Wakefield Bus Station at 8.45am.

The boys often spend time in the Eastmoor area and in Wakefield City Centre.

Police believe that they are likely to be together but are concerned for their safety.

Stanislaw is described as 5ft 3in tall and of a slim build. He has brown hair and is believed to be wearing a Nike blue tracksuit and black Nike shoes.

Stanislaw is described as of slim build and 5ft 3in tall. The boys went missing from Wakefield Bus Station this morning

There are concerns about the welfare of the boys as temperatures plummet across the country. Solomon was believed to be wearing a blue tracksuit with a black cross-body bag

Solomon is described as 4ft 9in tall and of slim build. He has dark hair and is believed to be wearing a blue tracksuit, Nike hooded jumper and a black cross-body bag.

West Yorkshire Police have appealed to the public for help in locating the boys. Anyone with information should call 101 or use the website chat to speak with police.

Temperatures in Wakefield are expected to hit -1C on Thursday night, increasing concern for the boys.

The Met Office has issued yellow weather warnings for ice and snow across much of the country.

In the coming days as much as six inches of snow could fall across remote areas of the UK.