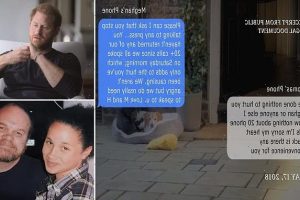 ‘Meghan doesn’t have a father’: Harry tells Netflix series, ‘If Meg wasn’t with me then her dad would still be her dad’ as he blames himself for rift and couple reveal messages to Thomas Markle

Prince Harry has said that he blamed himself for Meghan’s rift with her father Thomas Markle because ‘if Meg wasn’t with me then her dad would still be her dad’.

In episode three of the couple’s bombshell Netflix docuseries released today, the Duke and Duchess of Sussex reflected on events leading up to their royal wedding, resulting in a relationship breakdown with her father, 78.

Meghan pinpoints the moment when the ‘unravelling happened’ in their relationship just days before the couple tied the knot at St George’s Chapel in Windsor Castle on May 19, 2018.

Speaking to Netflix, the duchess recounted how her father, a former lighting director, found himself at the centre of a scandal when it emerged he had staged paparazzi photos and sold them for a reported $100,000. 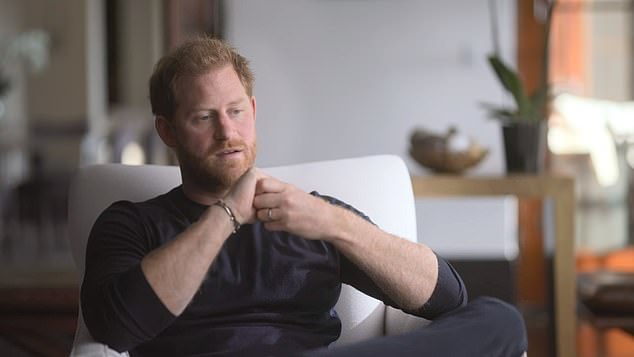 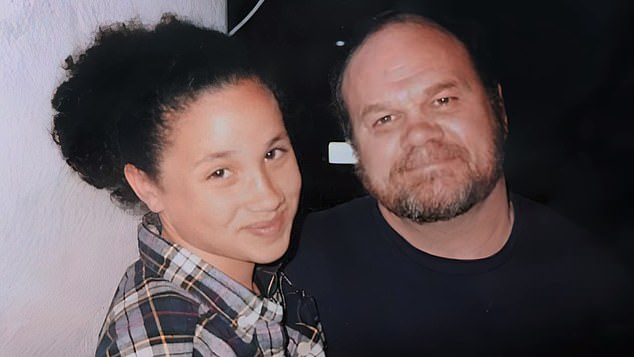 Meghan said her father (pictured together) denied staging photos, including one of him reading a history book on Britain as she offered to arrange his travel to London a day earlier than planned 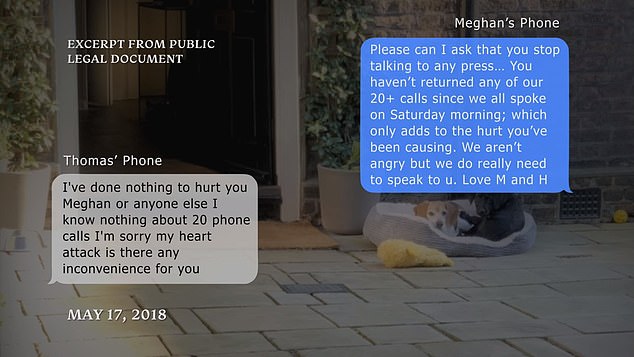 Meghan said she found out her father was not coming to the wedding ‘through a tabloid’ before reading that he was in the hospital following a heart attack. She said she repeatedly tried to call him but he would not pick up or respond to her texts

Soon after, Mr Markle suffered a heart attack and said he could no longer attend his daughter’s wedding with just days to go.

The segment begun with Meghan telling Netflix that a week prior to the wedding, she received a message from Jason Knauf, her former communications secretary, to say a ‘story is going to come out tomorrow that your father has been staging pictures and taking money from the press.’

The pictures showed Mr Markle being fitted for a suit, exercising in a public park and one of him reading a history book about Britain from his hometown of Rosarito, Mexico.

Meghan told the camera: ‘That was the first I was hearing of it. Jason [Knauf] said you need to call him and find out if this is true or not because it could be really damaging. 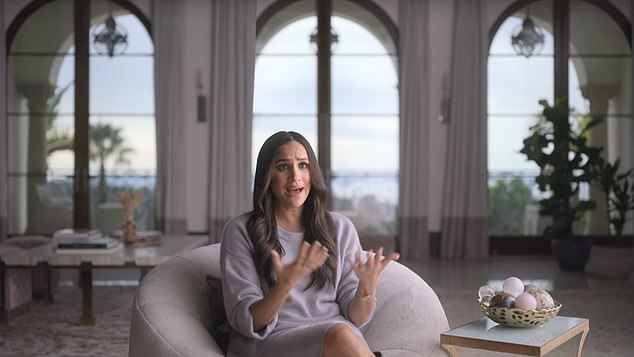 Meghan pinpointed the moment when the ‘unravelling happened’ in their relationship just days before the couple tied the knot at St George’s Chapel in Windsor Castle on May 19, 2018 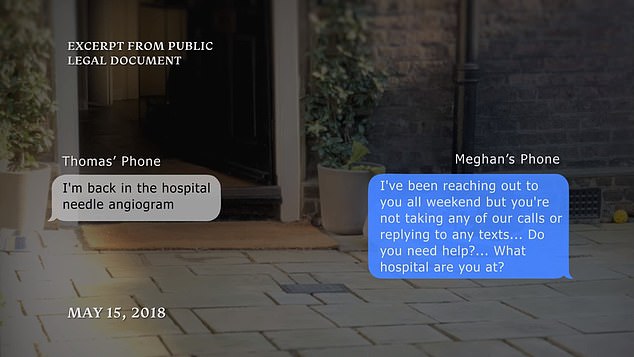 Recounting events, she said: ‘H and I called my dad, I said “look they are saying you are taking money from the tabloids to stage photos, is this true?”

‘He goes “no”, and on that call I said “look, this story, if they can’t stop it and it’s going to come out tomorrow, so why don’t we send someone to your house to get you out of there now? Because if that’s the case your house will be swarmed by media… lets get you out of Mexico” and he said “no, I have things I need to do”, and it felt really cagey.’ 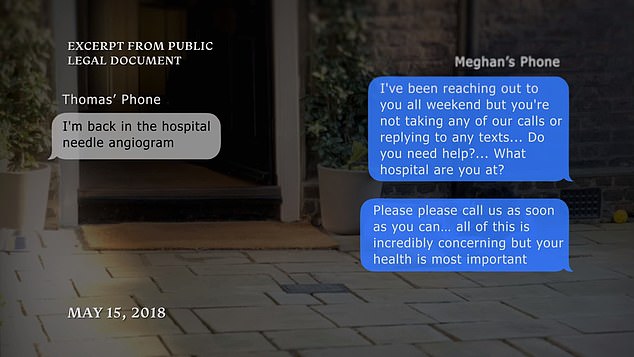 The Duchess of Sussex said that in the week leading up to the wedding, ‘paps and media and journalists were following him [Mr Markle] all day everyday.’

But for Meghan, the ‘unravelling happened’ when she claimed her father wouldn’t pick up her call and was ‘talking to TMZ’, which reported that he had suffered a heart attack and could no longer attend the wedding.

Meghan told the cameras: ‘I’m finding out you’re not coming to our wedding through a tabloid.’

The couple then revealed some of the messages forwards and backwards between Megan’s phone and her fathers in the four days leading up to the their wedding.

A text message from Mr Markle’s phone to his daughter’s phone on May 15, said: ‘I’m back in the hospital needle angiogram [sic]’ 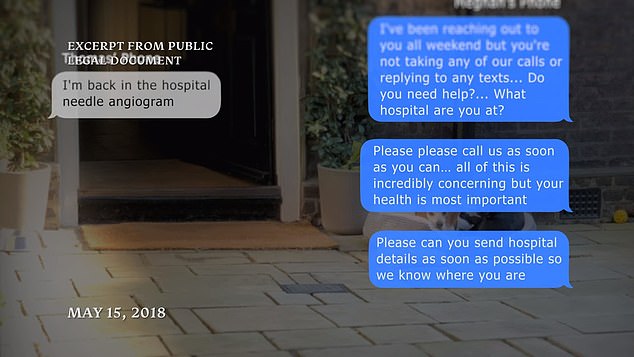 Meghan said she pleaded with her father, Thomas Markle, to tell her ‘what’s going on’ when it emerged he had suffered a heart attack and texted her to say he was in hospital

Meghan can be heard saying: ‘And then suddenly he was saying he’s in the hospital. What’s going on?

A response from Meghan’s phone then shows on the screen, saying:  ‘I’ve been reaching out to you all weekend but you’re not taking any of our calls or replying to any texts… Do you need help?… What hospital are you at?’

Meanwhile, images of newspaper front pages from the time appear on screen. 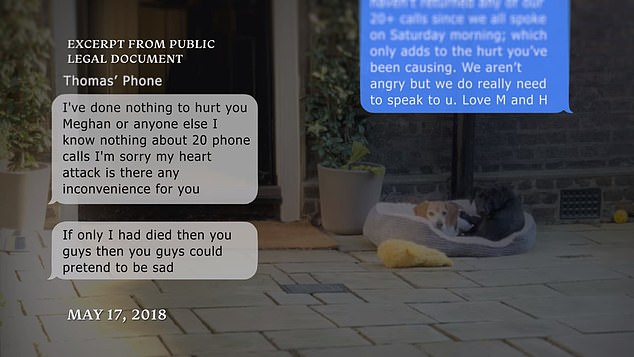 She continued: ‘Even once it was said in the media I just kept calling.

More messages from Meghan’s phone then appear, with one saying: ‘Please please call us as soon as you can… all of this is incredibly concerning but your health is most important’.

Another said: ‘Please can you send hospital details as soon as possible so we know where you are’.

On May 17, 2018, two days before the wedding, Meghan sent a message to her father saying: ‘Please can I ask that you stop talking to any press… You haven’t returned any of our 20+ calls since we all spoke on Saturday morning; which only adds to the hurt you’ve been causing. We aren’t angry but we do really need to speak to u. Love M and H’. 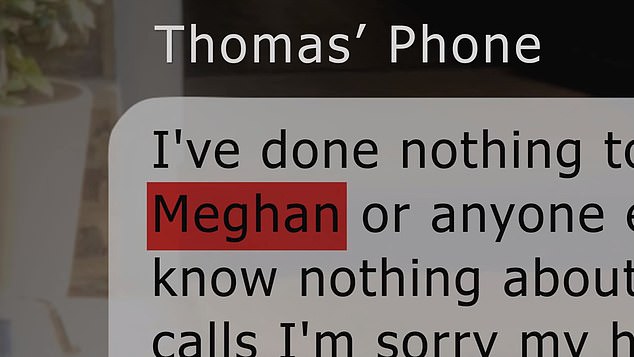 The Duchess of Sussex said ‘it was really weird’ that her father called her ‘Meghan’ instead of ‘Meg’, leading her to believe that his phone ‘had been compromised’

Meghan said: ‘And then someone texted back on his phone’ as a response from her father appears on screen and sombre music plays in the background.

It said: ‘I’ve done nothing to hurt you Meghan or anyone else I know nothing about 20 phone calls I’m sorry my heart attack is there any inconvenience for you [sic]’.

Meghan can then be heard saying: ‘It was really weird. You know how people text right?

‘My dad used a lot of emojis and a lot of ellipsis, and dot dot dot, and this was just the opposite.’

‘Meg, all my friends call me Meg and my parents call me Meg. I was like, that’s not my dad. So then we knew his phone had been compromised.’

Another message then appeared from Mr Markle’s phone saying: ‘If only I had died then you guys then you guys could pretend to be sad [sic]’. 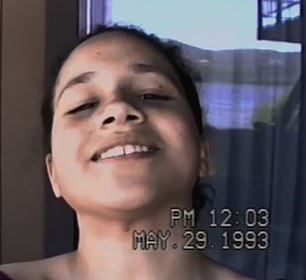 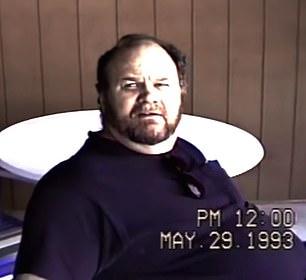 A response from Meghan’s phone replied: ‘Tom, it’s Harry, please answer your phone. I need to know this is actually you because it doesn’t sound like u at all [sic]’.

Meghan told the camera: ‘And we said pick up the phone we need to know its you, never spoke to him.’

Speaking at the end of the episode, the Duke of Sussex revealed that he blamed himself for the ‘incredibly sad’ turn of events.

He said: ‘Of course, it’s incredibly sad what happened.

‘She had a father before this and now she doesn’t have a father. And I shouldered that, because if Meg wasn’t with me then her dad would still be her dad.’

The episode then ends with home footage of Meghan and her father dating back to 1993.