‘Goes against our beliefs’: Parents and church clash over school values

Last weekend, St Catherine’s – Australia’s oldest private girls’ school – held its biennial magnolia fundraising fair, featuring a petting zoo, glitter face painting, and a LEGO-building expo. A frolic in the autumn sun was exactly what the school community needed after a distressing few days, in which students and parents grappled with the news that under recent rules set by the conservative, evangelical Sydney Anglican diocese, which dominates the school’s board, the next principal – who will take over in 2023 – can only accept the job if they agree that marriage is just between a man and a woman.

St Catherine’s is in Sydney’s eastern suburbs, where more than 80 per cent of residents supported same-sex marriage in the 2017 plebiscite. Some of its parents are in same-sex relationships. Most families are not practising Anglicans.

The news about the terms to which their new principal will have to agree, which they learned from the Herald, prompted an outcry. The school’s council was inundated with complaints. A former dux of the school, now doctor, Rebecca James, pointed out that about 7 per cent of young females identify as LGBTQ. “That’s two per class,” she wrote on the school’s Facebook page. “Let’s see the school remove this hideous, discriminatory, un-Christian clause.”

The outgoing principal, Julie Townsend, was sympathetic, saying discriminatory views had no place at the school. “Although we are a diocesan school, we are not the Sydney Diocese.”

Yet the Sydney Diocese – which has become increasingly conservative over the past few decades and is at odds with other Australian Anglicans on the ordination of women and blessing of same-sex relationships – holds control not only over the board of St Catherine’s, but also those of many of Sydney’s most high-profile, sought-after schools, including Shore, Kings’, Trinity Grammar, Abbotsleigh and St Andrew’s Cathedral School. While parents pay $30,000 a year or more, the ultimate decisions about how the schools are run lie not with them, but with the church. 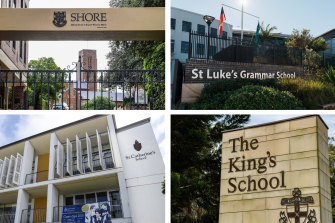 A local mum, Catherine Wilson had all but settled on St Catherine’s and Shore for her children’s high schooling. Now she is having second thoughts, and she is not alone. “It fundamentally goes against our own beliefs,” she says.

Wilson, who describes herself as agnostic, and her husband had already decided against Catholic high schools due to the religion’s stance on social issues. “We’re losing schools by the day. I thought if we stayed away from the Catholics we’d be safe. But I do think [Catholics are] more transparent [about their views].”

There are about 1050 non-government schools in NSW; more than 80 per cent of them are religious and all but a handful receive government funding. The remaining 20 per cent is mostly made up of schools for students with disabilities, or those that subscribe to an educational philosophy, such as Montessori or Steiner. The few mainstream non-denominational or secular private schools include Wenona, International Grammar, Sydney Grammar, Ascham and Reddam House.

The Catholic Church runs most religious schools and has always been frank about its education ‘mission’, which is to produce new generations of Catholics who are steeped in the faith. Parents are left in no doubt of this when they walk through the door of their local parish school; the walls are thick with crucifixes and portraits of saints, children prepare for their sacraments (first communion, reconciliation) in class, and families are actively encouraged to attend mass.

Anglican Archbishop Kanishka Raffel says the diocese’s schools have a similar purpose. “We have a commitment to education in a hospitable Christian context …. [that] also involves experiencing Christian care in a community shaped by our convictions that honours and welcomes all people,” he told the Herald. 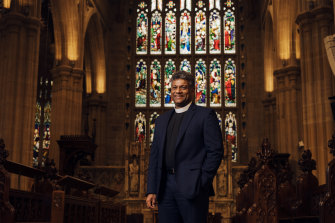 The Catholic Church is a broad one, but is ultimately an autocracy with the pope at its head. The philosophies of those who run the schools can vary, but there’s limited religious wriggle room. Sydney’s Catholic Archdiocese is conservative; Parramatta diocese less so. Religious orders sit outside the control of local bishops; the Jesuits (St Aloysius and St Ignatius Colleges) are agitators with a focus on social justice, and the Loreto and Good Samaritan nuns (St Scholastica’s, Rosebank, Loreto Kirribilli) are as feminist as is possible within a patriarchal church.

Anglicanism is more of a mixed and moveable feast, and this can be baffling to prospective Anglican school parents such as Catherine Wilson, who do not follow the minutiae of church politics.

In Sydney, the approach is deeply evangelical; just up the road in Newcastle, it is much more progressive. Observers say Sydney has always practised a generally orthodox Anglicanism, but until a few decades ago there was a variety of parishes, some leaning towards the evangelical low-church (a purist focus on the bible), some towards the high-church (a Catholic-esque fondness for ritual) and some in the moderate middle. Now, Sydney has skewed heavily towards the low church. “It’s becoming more monochrome,” says one long-serving chaplain.

The tension between the contrasting views came to a head this week at the general Synod, a national Anglican congress that thrashes out issues facing the church. A statement from Sydney that marriage should only be between a man and a woman sparked a bitter debate over same-sex marriage. The explosive outcome – it was backed by lay and clergy, but vetoed by bishops – took the Australian church a step closer to a schism of the type seen overseas, where intractable differences prompted breakaway dioceses to form new churches.

Sydney diocese’s intensifying evangelicalism is seeping into its schools. In 2008, the highly-regarded educator Phillip Heath – who is now principal of Barker, also a diocese-controlled school – left his job as head of St Andrew’s Cathedral School partly due to conflict with the then dean of St Andrew’s, Phillip Jensen, who wanted him to employ evangelical Anglicans on his teaching staff.

In 2019, amid national debate over a religious discrimination bill, the Sydney diocese told its 34 Anglican principals to sign a letter to federal MPs, saying that while schools would not expel gay students or staff, they wanted to reserve the right to employ people who supported the ethos of the school. Parents and alumni were furious; principals tearfully professed regret; the then archbishop, Glenn Davies, apologised for the hurt it caused.

Not long after, the synod voted to insert a clause in the personal statement of faith, which must be signed by incoming principals and board members at Anglican diocese schools, affirming they not only believed marriage was between a man and a woman, but also that any sexual activity outside such a union was unchaste. The school communities were not informed of the change. A St Catherine’s School mother, who is in a same-sex relationship, said if she had known, “I would have felt very differently about having my daughter there.”

Shore appointed a new principal in 2020, and St Andrews followed this year. Neither responded to the Herald’s inquiries about whether the principals signed the revised statement. “What’s the next clause – will it be about women?” asked one of several principals opposed to the move. “It’s a huge rift between the schools and the synod.”

“Someone in Melbourne recently told me they’d never get a look-in to a school in Sydney; ‘I’m not the right colour and flavour [of Anglicanism]’,”

Alongside the moral debate, some in the education community question whether – amid a significant teacher shortage – Anglican schools will compromise their standards if they become too picky about the beliefs of their leaders. There are more than 30 Anglican schools in NSW and some within the church say that the frequent movement between schools in different states has slowed; only Sydney Anglicans need apply for the top jobs now.

“Someone in Melbourne recently told me they’d never get a look-in to a school in Sydney; ‘I’m not the right colour and flavour [of Anglicanism]’,” one former principal says.

There will be heavy scrutiny of the appointment at St Catherine’s. When asked whether there was room within Sydney diocesan schools for different interpretations of Anglicanism, Raffel says: “We seek to ensure that we have school leaders of deep personal Christian conviction, but we have always had school communities that include people of other views, other faiths, and no faith.” 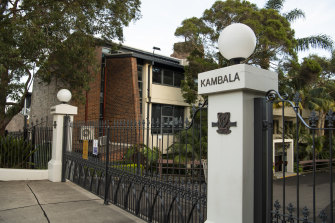 Kambala is one of the Anglican schools that is not controlled by the Sydney Diocese.Credit:Louise Kennerley

Non-religious, socially progressive parents are becoming jittery. At Cranbrook in the eastern suburbs – which, like Redlands, Kambala, and SCEGGS Darlinghurst has diocesan representatives on the board, but only with a minority vote – there are fears that the diocese is trying to increase its influence, says one woman close to the school, on the condition of anonymity due to her high-profile corporate job. “The church has very conservative views about women.”

Yet another source, familiar with Cranbrook, says the board, like the principal and the school community, was still liberal-minded. “It’s understandable that people are nervous – it’s like the people of Finland watching what’s happening in the Ukraine,” he says. “I think it’s a case of being alert, not alarmed.”

Schools that legally disentangled with the diocese in the latter part of last century can distance themselves. Kambala removed the word ‘Anglican’ from the school sign. It even appointed a Catholic principal in a leadership crisis, although there were dark mutterings that such a thing must never happen again. Redlands has dropped ‘SCEGGS’ – Sydney Church of England Girls Grammar School – from its official name. One Anglican principal would not be surprised if SCEGGS Darlinghurst followed. “It would be easy enough to edge further away.”

In a formal church split, these schools could pick their side. Schools controlled by the diocese, which include those run by the Anglican Schools Corporation, such as Penrith Christian School, St Luke’s in Dee Why, and Danebank College, could not.

One principal of a high-fee diocese-controlled school, on the condition of anonymity so they could speak freely, says families continued to stick by the schools despite the controversies of recent years. “They have a lived experience that they use to filter these kinds of headlines,” the principal says. “The people it weighs on is the people who have come through the school in years gone by.

“Future [enrolments] are the big unknown. I think they are reserving their judgment, and continuing to perceive value in what we do. The church has always taught that marriage is between a man and a woman. If that is a big issue, they will probably look away. That is what parental choice is all about.”

The former head of Shore, Tim Wright, says the several Archbishops he had worked with never called him about anything but sport. “I think the Catholic Church, the Anglicans, the Presbyterians, Baptists and Islamic groups would all have a view on the definition of marriage, but it’s not the same thing as how we pastorally support young people who come out,” he says. “In my experience, I think that gets dealt with pretty carefully.”

In a statement, Raffel says he was always willing to listen to feedback. “I would say to anyone who is in any doubt, that we want our schools to be places where all students will flourish.”