London: Car manufacturers will be financially punished unless they sell a minimum number of electric vehicles each year under fresh plans to drive down prices and speed up Britain’s transition to a net zero economy.

However, government analysis concedes the goal of carbon neutrality by 2050 will saddle taxpayers with bigger bills and warns a huge hole will be blown in the budget as revenue from fuel consumption plummets.

The United Kingdom will ban the sale of new petrol and diesel cars and vans by 2030 – one of the world’s most ambitious targets. With pure electric cars accounting for 15 per cent of new car registrations last month, the UK needs to rapidly stimulate uptake to meet the end-of-decade goal. 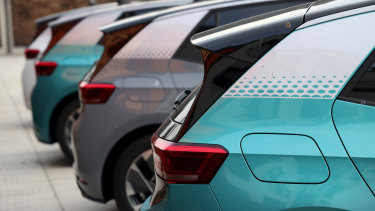 The United Kingdom wants to ban the sale of new petrol and diesel cars by 2030.Credit:Bloomberg

Shunning the approach of Norway, which has become the world leader in electric vehicles by offering buyers a suite of tax breaks, the United Kingdom will instead impose a new scheme on the car industry.

The so-called electric vehicle mandate will force global automobile giants to sell a certain number of electric cars. If they fall short, the companies will have to purchase expensive credits from more successful competitors.

It is modelled in-part on a similar scheme developed by California in the 1990s and has been influenced by research from Policy Exchange, a centre-right think tank chaired by former Australian foreign minister Alexander Downer.

Transport emissions account for a quarter of the world’s annual greenhouse gas pollution, with a transition towards low and zero-emissions cars viewed as critical for the leading economies to meet their Paris climate accord commitments.

The government announced the scheme – the design of which has not been completed – as Prime Minister Boris Johnson released proposals to speed up the phase out of dirty home heating and to decarbonise the electricity system.

“I know that there are some who say we are going too fast,” Johnson said.

Treasury modelling released on Tuesday shows emissions from cars and vans will need to fall by 65 to 76 per cent by the end of the decade if Britain it to meet its targets.

A Policy Exchange research paper credits California’s 1990s mandate scheme as the “key driver” of battery innovation across America, even though it only operates in just 10 states. A similar scheme also commenced in China in 2019.

Under California’s scheme, carmakers are required to calculate electric vehicle ‘credits’ equivalent to 22 per cent of sales by 2025.

A battery vehicle with a range of over 350 miles (563 km) per charge generates four credits but one with a 150-mile range generates two credits. The penalty for non-compliance is $US5000 ($6685) per credit.

Advocates of a sales mandates argue expanding existing incentives like one-off grants fail to consider the market and will inflict too much damage on government budgets.

In Norway, tax incentives have lowered the purchase price of a petrol Volkswagen Golf to €34,076 compared to €33,286 for the electric equivalent, even though the import price of the battery model is about €$10,000 more.

The scheme costs Norwegian taxpayers an estimated $US2.3 billion in annual lost revenue.

The UK Treasury modelling released on Tuesday said decarbonising the economy would put demands on public spending but the biggest impact would be lost tax revenue from fossil fuel industries.

Treasury warned any temporary boost from an expanded carbon pricing regime would not offset the projected decline. General tax hikes may be needed to plug the gap, it warned.

“The automotive industry is putting zero-emission vehicles on Britain’s roads at pace beyond all forecasts, such is the choice and appeal of these new models,” he said.

“A well-designed, flexible regulatory framework could help maintain or even increase this pace to ensure we deliver on our shared decarbonisation ambitions.”

Electric vehicles made up just 0.7 per cent of sales in Australia last year. The federal government will release its Future Fuel Strategy, aimed at the long-term phase out of petrol and diesel vehicles, in the coming weeks.

Uniswap Retraces above $4.66 as the Crypto Reaches Oversold Region

Towns With the Most Expensive Rent

Cities Where the Fewest People Own Their Homes

Uniswap Retraces above $4.66 as the Crypto Reaches Oversold Region