Home » World News » Hunt for Nazi camp secretary, 96, after she fails to turn up for trial

Hunt for Nazi camp secretary, 96, after she fails to turn up for trial 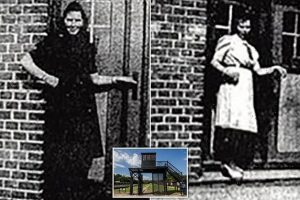 A manhunt is underway for a 96-year-old former Nazi death camp secretary after she failed to turn up for the start of her trial and ‘went on the run’ in Germany this morning.

Irmgard Furchner was supposed to appear before the Juvenile Chamber of the Itzehoe Regional Court today, to face charges of assisting in the murder of 11,000 prisoners at Stutthof concentration camp, 33 miles east of Danzig in Poland.

But at 10.10am, embarrassed judge Dr. Groß announced to the court that Furchner – dubbed the ‘secretary of evil’ by German media and one of the first women to be prosecuted for Nazi-era crimes in decades – had not turned up to court and was officially missing.

‘The accused is on the run,’ said court spokesperson Frederike Milhoffer. ‘She left her home early in the morning in a taxi in the direction of a metro station.’

Charges cannot be read unless Furchner, who faces trial in an adolescent court because of her young age at the time of the alleged crimes, is present in court in person.

The judge issued an arrest warrant for the elderly fugitive’s arrest. The defendant’s lawyer, Wolf Molkentin, was present in the court room but did not make a statement.

Around 65,000 people died at the camp, not far from the city of Gdansk, among them ‘Jewish prisoners, Polish partisans and Soviet Russian prisoners of war’, according to the indictment.

After long reflection, the court decided in February that Furchner was fit to stand trial. 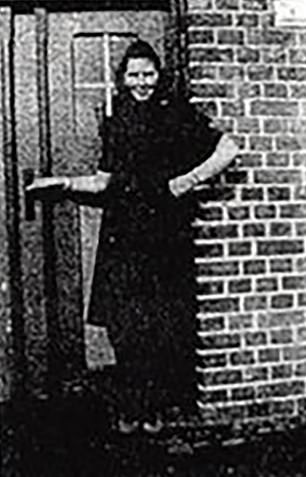 Irmgard Furchner (left and right, in 1944), 96, was supposed to appear before the Juvenile Chamber of the Itzehoe Regional Court today, to face charged of assisting in the murder of 11,000 prisoners at Stutthof concentration camp, 33 miles east of Danzig in Poland. 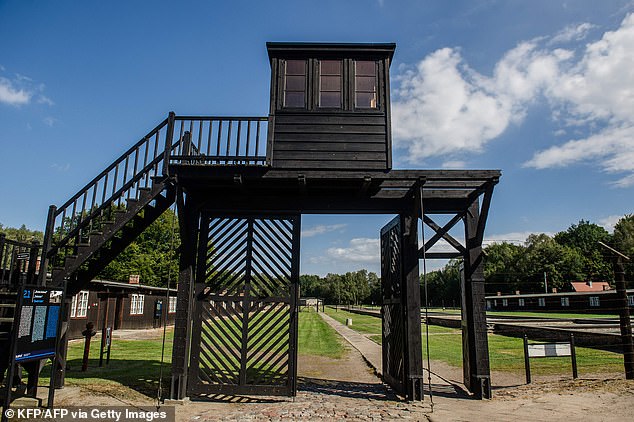 Addressing her disappearance this morning, Frederike Milhoffer said: ‘I have received information that at some time before 7.30am this morning, the accused took a taxi to the underground station at Norderstedt.

‘She is therefore officially missing and a warrant has been issued for her arrest.

‘I am not able to say at this time, who provided this information, or whether the police will be able to find her.’

Speaking to MailOnline, lawyer Rajmund Niwinski, who is representing seven plaintiffs, said: ‘You just have to reckon with things like this happening now and again.

‘After all this is not just a mere history lesson, this is a murder trial so obviously some people just don’t want to turn up to trial.’

Furchner, who now lives in a retirement home near Hamburg, was aged between 18 and 19 when she worked as a former secretary for the SS commander of the Stutthof concentration camp.

She was set to go on trial today on charges of more than 11,000 counts of accessory to murder.

Prosecutors argue that she was part of the apparatus that helped the Nazi camp function more than 75 years ago.

The state court in Itzehoe in northern Germany said in a statement that the suspect allegedly ‘aided and abetted those in charge of the camp in the systematic killing of those imprisoned there between June 1943 and April 1945 in her function as a stenographer and typist in the camp commandant’s office.’ 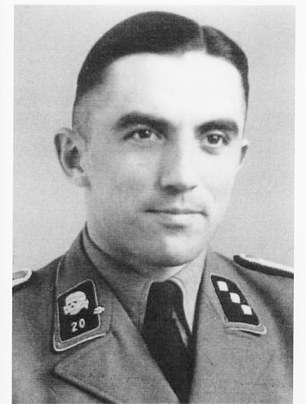 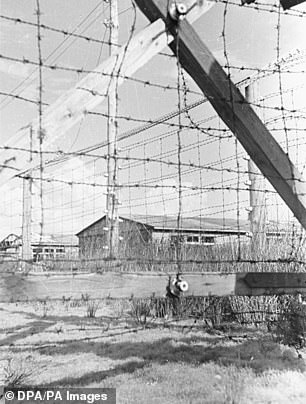 The secretary worked for Nazi commandant Paul Werner Hoppe (pictured left), who was convicted by a West German court in 1957 and died in 1974. The Nazis murdered around 65,000 people in Stutthof (pictured right) and its subcamps, which were operational from September 2, 1939 until May, 9, 1945

Despite her advanced age, she was set to be tried in juvenile court because she was under 21 at the time of the alleged crimes.

The case against Furchner will rely on German legal precedent established in cases over the past decade that anyone who helped Nazi death camps and concentration camps function can be prosecuted as an accessory to the murders committed there, even without evidence of participation in a specific crime.

A lawyer for the defendant told Der Spiegel magazine that the trial would centre on whether the 96-year-old had knowledge of the atrocities that happened at the camp.

‘My client worked in the midst of SS men who were experienced in violence – however, does that mean she shared their state of knowledge? That is not necessarily obvious,’ Wolf Molkentin said.

According to other media reports, the defendant was questioned as a witness during past Nazi trials and said at the time that the former SS commandant of Stutthof, Paul Werner Hoppe, dictated daily letters and radio messages to her. 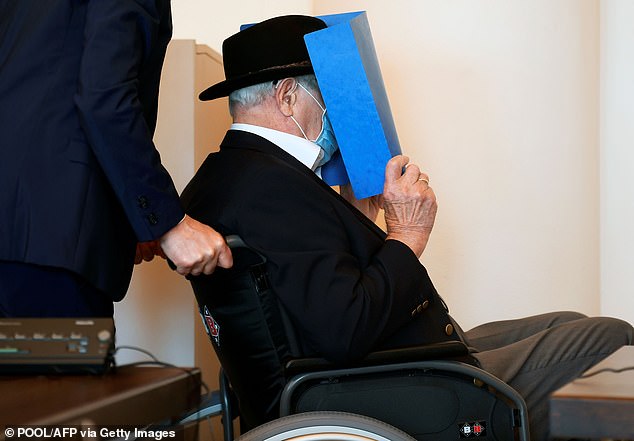 Last year 93-year-old Bruno Dey, pictured, was convicted for his part in the Holocaust after serving as an SS guard at Stutthof

Still, Furchner testified she was not aware of the killings that occurred at the camp while she worked there, the German news agency dpa reported.

Initially a collection point for Jews and non-Jewish Poles removed from Danzig – now the Polish city of Gdansk – Stutthof from about 1940 was used as a so-called ‘work education camp’ where forced laborers, primarily Polish and Soviet citizens, were sent to serve sentences and often died.

From mid-1944, tens of thousands of Jews from ghettos in the Baltics and from Auschwitz filled the camp, along with thousands of Polish civilians swept up in the brutal Nazi suppression of the Warsaw uprising.

More than 60,000 people were killed there by being given lethal injections of gasoline or phenol directly to their hearts, or being shot or starved. Others were forced outside in winter without clothing until they died of exposure, or were put to death in a gas chamber.

In a separate case, a 100-year-old man is going on trial next week in Brandenburg for allegedly serving as a Nazi SS guard at a concentration camp just outside Berlin during World War II.

The man, whose name wasn’t released in line with German privacy laws, is charged with 3,518 counts of accessory to murder. The suspect is alleged to have worked at the Sachsenhausen camp between 1942 and 1945 as an enlisted member of the Nazi Party’s paramilitary wing.