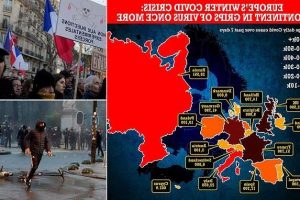 Winter infections are soaring across Europe amid the spread of Covid variant Omicron as countries desperately bid to slow transmission with the introduction of further restrictions.

Denmark became the first EU country to lift its Covid restrictions three months ago, but the emergence of the new variant has seen Europe revert back to tougher rules as cases and hospitalisations are on the rise again.

The UK lifted its own lockdown restrictions earlier on July 19, but Health Secretary Sajid Javid today warned there are ‘no guarantees’ Christmas Day will go ahead without a lockdown as Boris Johnson desperately fends off alarming warnings from scientists.

He admitted ‘everything is under review’ after SAGE delivered a grim assessment that the number of infections could reach two million by the end of the month without tougher restrictions – floating a ‘circuit breaker’ ban on households mixing and closure of non-essential shops.

It came as France barred UK holidaymakers from entering the country without a ‘compelling reason’ this week, while Germany added Britain to its list of high-risk countries.

Meanwhile, protestors clashed with police in the Brussels earlier this month amid demonstrations against the tightening of restrictions across the continent. 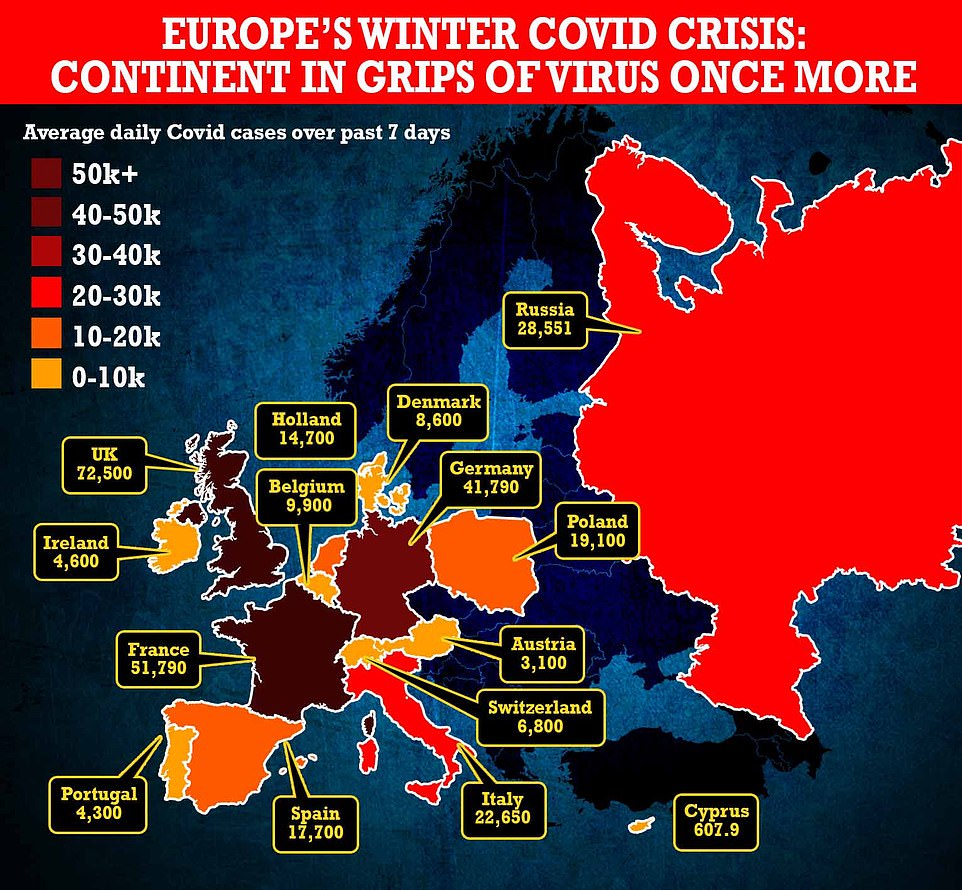 Coronavirus cases are soaring across most of Europe, with the above graphic showing the seven-day averages for infections. The figures are set to rise as Omicron continues to spread across the continent 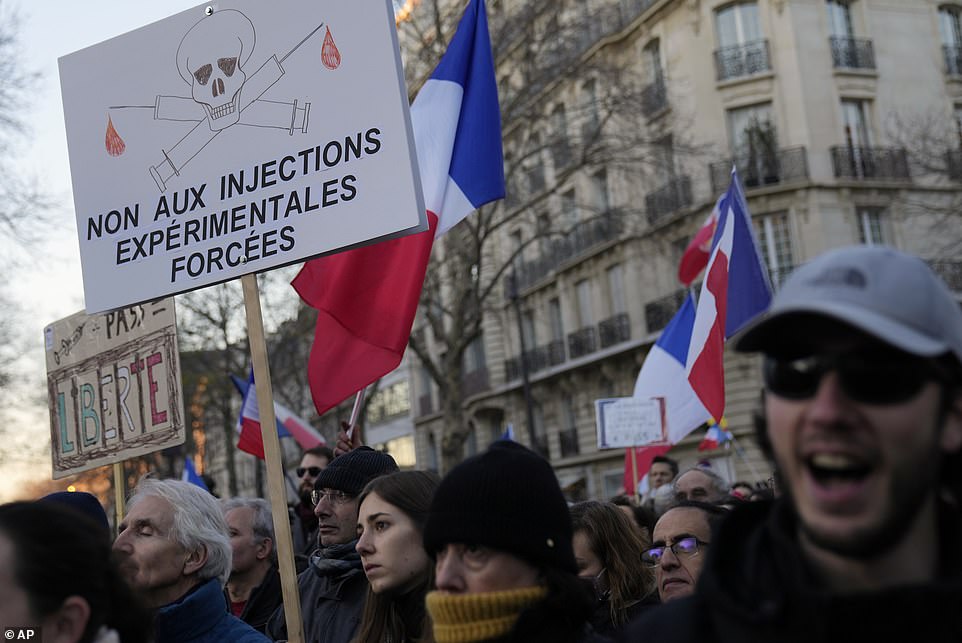 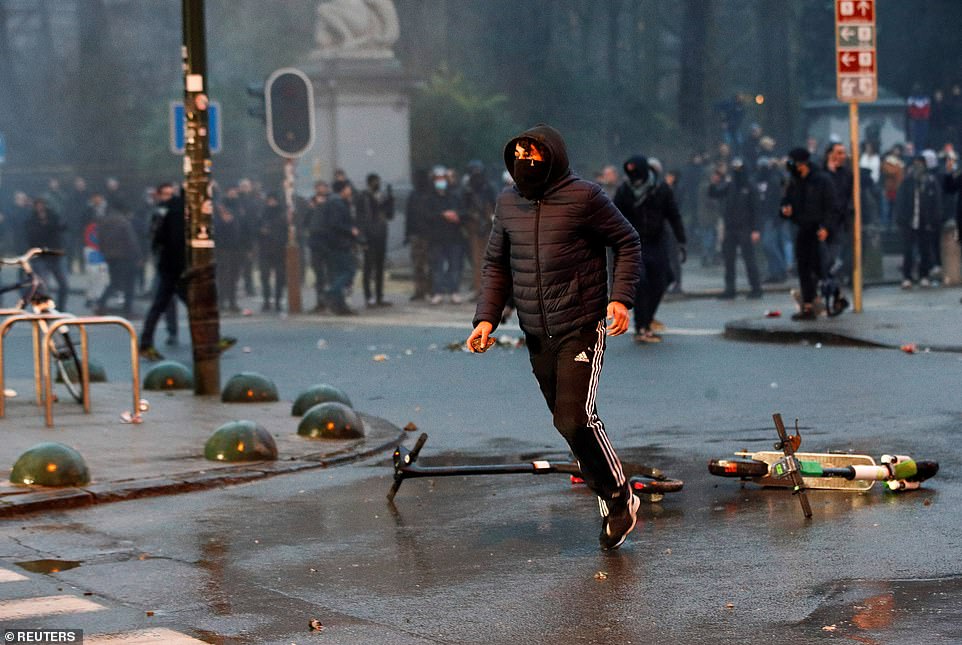 Omicron is rapidly spreading across Europe already, though, and restrictions are being rolled out across the continent in a desperate bid to save Christmas.

The measures, set out below, taken by each country have differed, with Covid passes deemed particularly divisive. The certificates have become mandatory across some parts of Europe, while proposals to do the same elsewhere have been met with vociferous public opposition.

The Irish cabinet has agreed that hospitality venues, cinemas and theatres should have a closing time of 8pm from Monday (December 20) to deal with the threat from Omicron.

The measure will stay in place until January 30 and will be kept under constant review.

In a televised address on Friday, Taoiseach Micheál Martin said more than a third of new cases were attributed to the new variant. 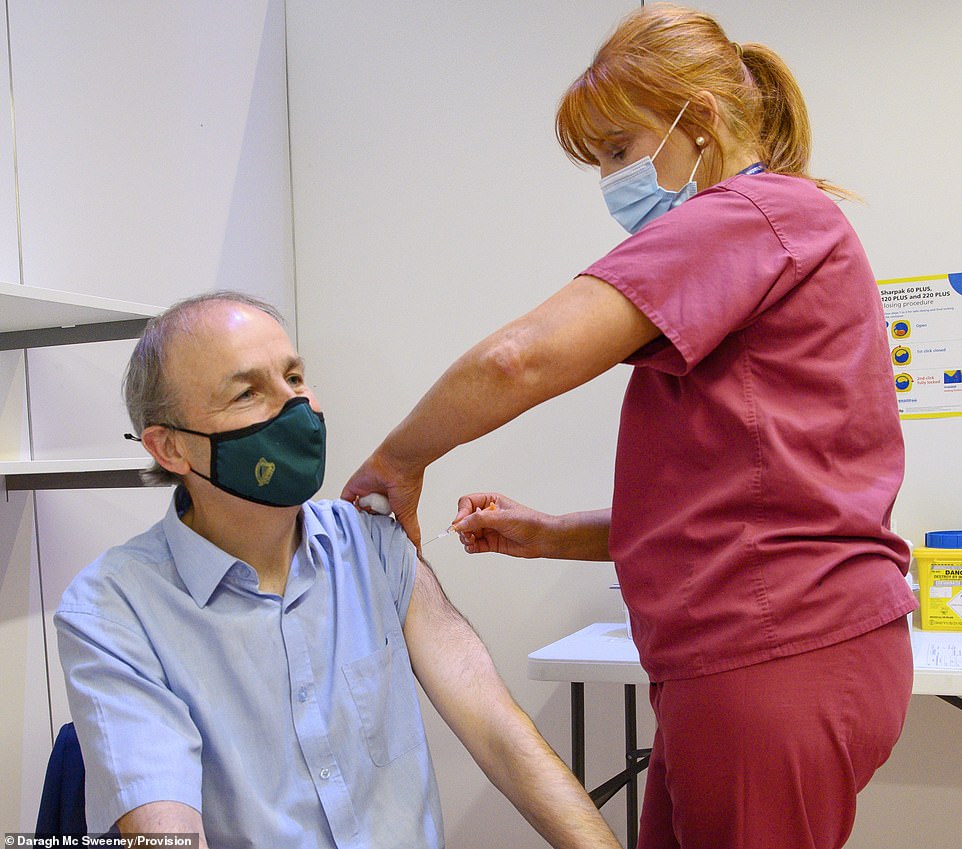 Taoiseach Micheal Martin pictured receiving his AstraZeneca jab in Cork City Hall. The Irish cabinet has agreed that hospitality venues, cinemas and theatres should have a closing time of 8pm

Further restrictions announced included the number of spectators allowed to attend sporting events being capped at 50 per cent up to a maximum of 5,000 people.

All indoor events can operate at 1,000 or 50 per cent capacity and must be fully seated, while weddings will have a cut-off time of midnight and an attendance cap of 100 from Monday.

Restrictions are already in place for bars and restaurants, which must not accept bookings for more than six people and must only offer table service.

Ireland recorded 7,333 confirmed cases of Covid on Sunday, while 410 patients were hospitalised and 107 were being treated in ICU wards.

France has barred UK holidaymakers from entering the country without a ‘compelling reason’.

Only around 300 cases of Omicron have been recorded in France to date, but President Emmanuel Macron highlighted Britain’s much higher infection rate as justification for bringing in the new travel rules. 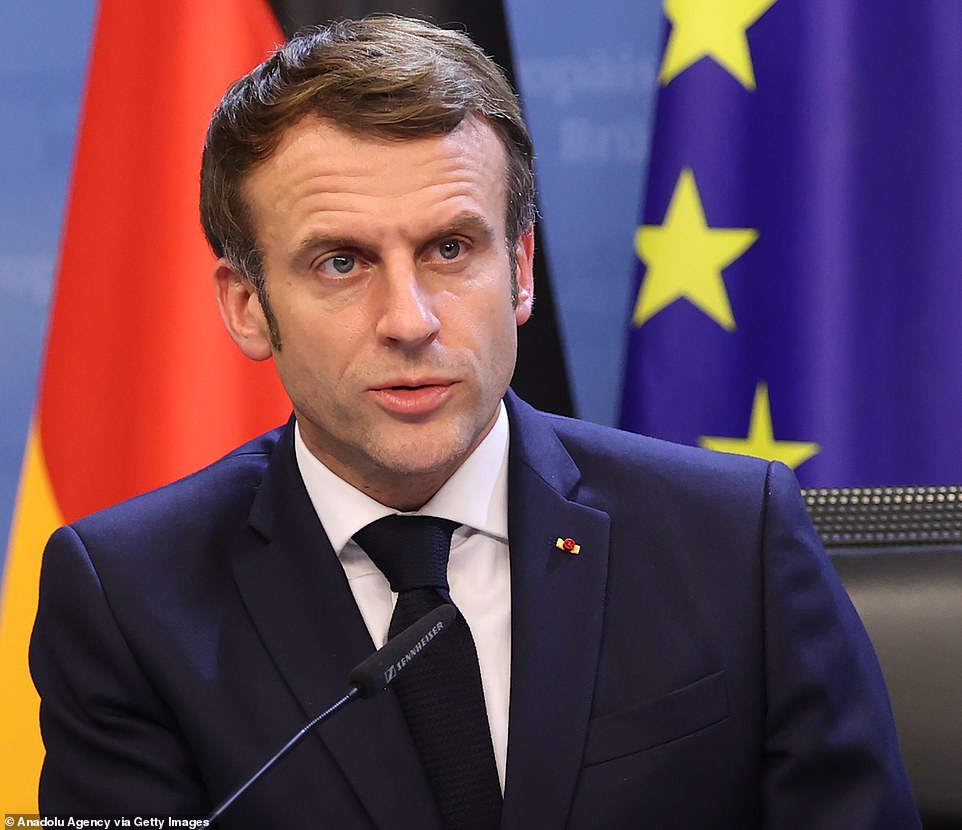 France is reluctant to impose another lockdown and Prime Minister Jean Castex said he hopes a series of new measures aimed at curbing the spread of Omicron will persuade more people to receive their jab.

They included shortening the gap between the second and third dose of the vaccine, and requiring a full vaccination to enter restaurants and long-distance public transport.

All official New Years Eve celebrations and firework displays have been cancelled.

Germany has tightened restrictions on travel from the UK.

From 11pm UK time on Sunday, there will be a ban on carriage from the UK to Germany, with the exception of Germany nationals.

Everyone entering Germany from Britain, regardless of vaccination status, will also need a negative PCR test and is required to quarantine for 14 days.

The restrictions could last until at least January 3.

Germany also has reimposed its own health restrictions earlier this month following high case numbers due to Omicron, voting overwhelmingly in favour of barring unvaccinated individuals from restaurants and non-essential commerce.

The country remains short of millions of doses, despite aims to speed up its booster campaign.

Reported daily cases, at just over 50,000 a day, have been relatively stable over the past week.

Despite protests, several regions of Spain have introduced stricter measures for the unvaccinated over the festive period.

It included the use of Covid certificate to enter bars, restaurants and other public places.

Around 80 per cent of the population is jabbed, but the rise of Omicron has triggered another vaccination drive.

Like most of Europe, Spain is also looking to administer more booster shots in the run up to Christmas and have just approved them for the over 40s.

Portugal declared a ‘state of calamity’ in which it reintroduced tighter restrictions from December 1.

This included a digital certificate proving vaccination or recovery from Covid being required to access restaurants, cinemas and hotels.

Face masks must also be worn in all enclosed spaces and outdoors where social distancing cannot be maintained. 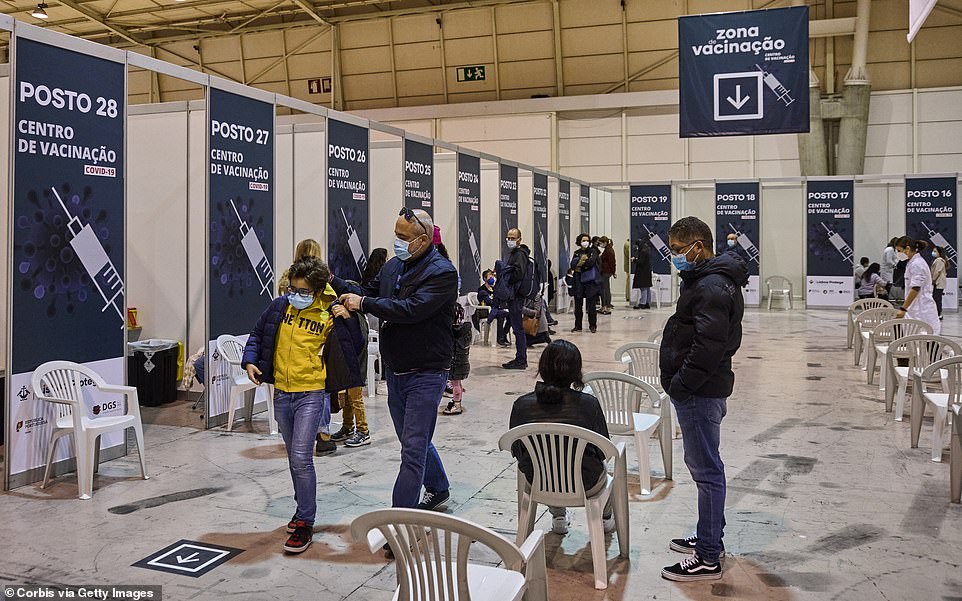 In terms of travel, Brits require proof of a negative test result, no matter their vaccination status.

Portugal said on Friday it estimated infections with the fast-spreading coronavirus variant Omicron were doubling every two days and could account for 80% of all new cases by the end of December.

An average of 4,300 cases are being reported daily, though hospitalisations remain low.

Poland recorded its highest number of Covid deaths since April on Wednesday amid a continuing high daily rate of new coronavirus infections.

On the same day, it confirmed restrictions closing nightclubs. However, they will reopen on December 31 and January 1 to allow for New Year’s celebrations to take place.

All shops and services remain open as usual, but with limited capacity, and face masks are mandatory inside.

Gyms, fitness clubs and indoor games facilities have a limit of one person per 15 square metres.

Teachers, medics and security forces, including police and the military, are required to be fully vaccinated by March 1.

Poland has averaged 19,100 cases per day over the last week, but only reported its first Omicron case on Thursday.

Denmark Prime Minister Mette Frederiksen announced the closure of public venues including cinema, theatres and concert halls on Friday after the country recorded 11,000 daily confirmed cases for the first time during the pandemic.

While a full lockdown is not being considered, she said ‘it’s necessary to have new restrictions that limit activity in the community and reduce transmissions’.

Earlier this week, the country’s school children were sent home for Christmas a week ahead of schedule. 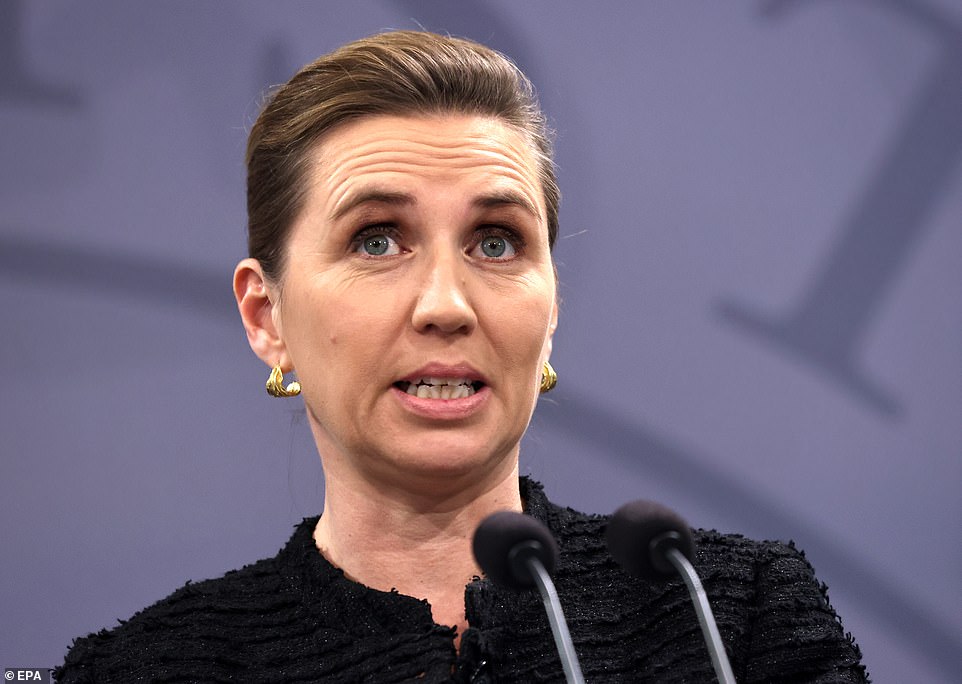 And now the Government is proposing to close cinemas, theme parks and zoos to break the chain of transmission.

Denmark has averaged 8,600 new cases over the last week, but figures are rising across the country amid the spread of Omicron.

From Sunday, all non-essential stores, bars and restaurants will be closed until January 14.

Prime Minister Mark Rutte confirmed the restrictions in a press conference on Saturday evening, where he said schools and universities are also to shut until January 9.

Shops, bars and restaurants were already under a 5pm to 5am curfew introduced at the end of November. 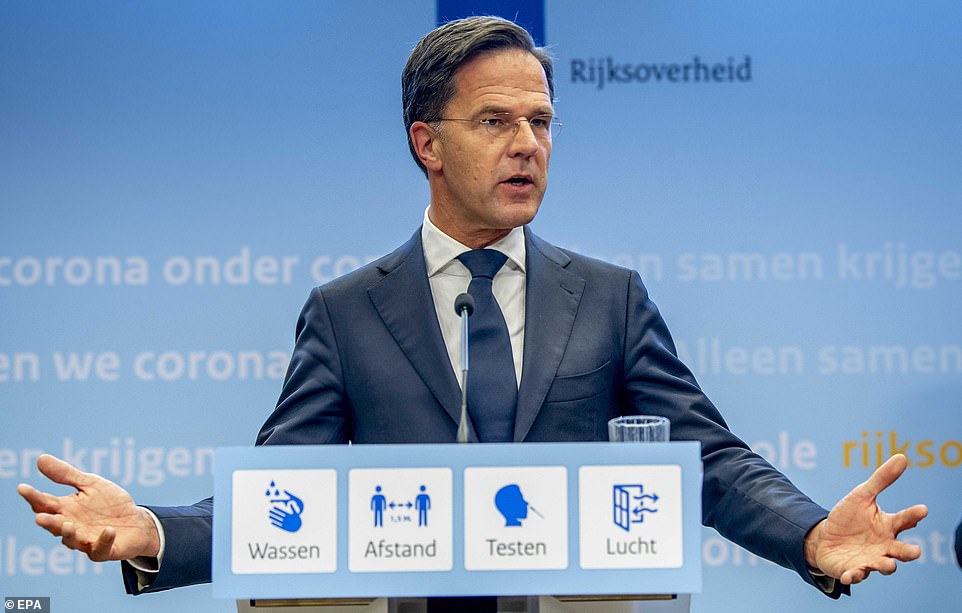 Prime Minister Mark Rutte speaks during a press conference announcing further Covid measures earlier this week. From Sunday, all non-essential stores, bars and restaurants will be closed until January 14.

Although Covid cases dropped in the Netherlands after it imposed restrictions last month, only 1.5million people have received a booster jab after it became one of the last countries in Europe to launch its drive.

Norway announced stricter Covid measures on December 12 after setting record highs for both infections and hospitalisations.

The restrictions included a ban on the serving of alcohol in all licensed premises, while social distancing measures were also reintroduced.

The new measures are set to last four weeks.

Prime minister Jonas Gahr Støre acknowledged it felt like a lockdown, but said it was necessary to prevent the healthcare system from becoming overwhelmed. 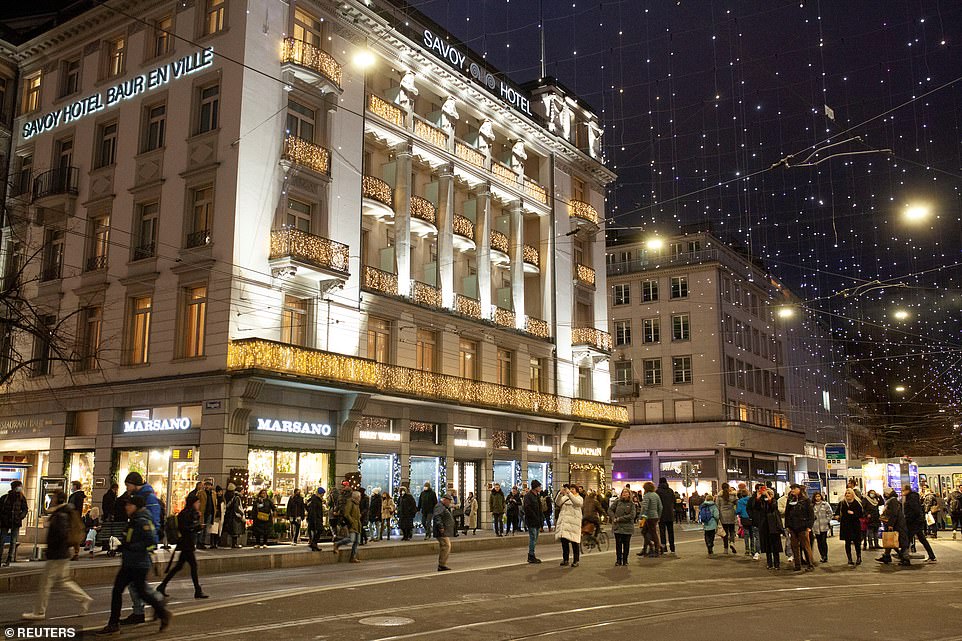 Christmas shoppers walk under Christmas illuminations inu Zurich, Switzerland, amid the spread of the coronavirus

From Monday, Switzerland will introduce restrictions on public life for those who are not vaccinated.

Only people who have received a jab or have recovered from Covid will be able to access restaurants, cultural venues or other indoor events.

The rules, introduced on Friday, also stated that everyone must provide a negative test in areas where masks cannot be worn.  Only people who have been vaccinated or had a booster jab within the last four months, or are aged under 16, are exempt from this testing requirement.

Switzerland recorded 9,941 new infections on Friday with 1,627 patients in hospital, 294 of whom are in intensive care – raising concerns the healthcare system may be overwhelmed.

Omicron is spreading quickly across Italy, according to its national health institute.

Many public activities are off limits to anyone without a ‘Covid Super Green Pass’, a certificate showing proof of vaccination or recovery from the virus within the last six months.

The Government will hold a meeting next week in which it may impose obligations for vaccinated people to show a negative test to access crowded places, including restaurants and sports events.

It is understood around 84 Omicron cases have been identified thus far. A total of 7,576 cases were reported on Saturday – the country’s highest since March.

Covid screening is required for all travellers aged over 12 from the UK, requiring them to quarantine until the test results are conclusive.

Those who test negative will be given five rapid test kits that they must use during their stays.

People aged six and above require a Covid certificate to enter venues including shopping malls, catering establishments and some sports facilities.

The country’s health minister said the UK’s ‘drastic increase’ in cases was the reason for the new measures, which apply to travellers regardless of whether they’ve been vaccinated or have recovered from COVID-19.

In contrary to the rest of Europe, Austria lifted Covid restrictions for the vaccinated last week amid infection rates easing.

It came three weeks after reimposing strict rules after a rise in cases.

An 11pm curfew remains in place for restaurants and masks are still required on public transport, inside stores and at public places. 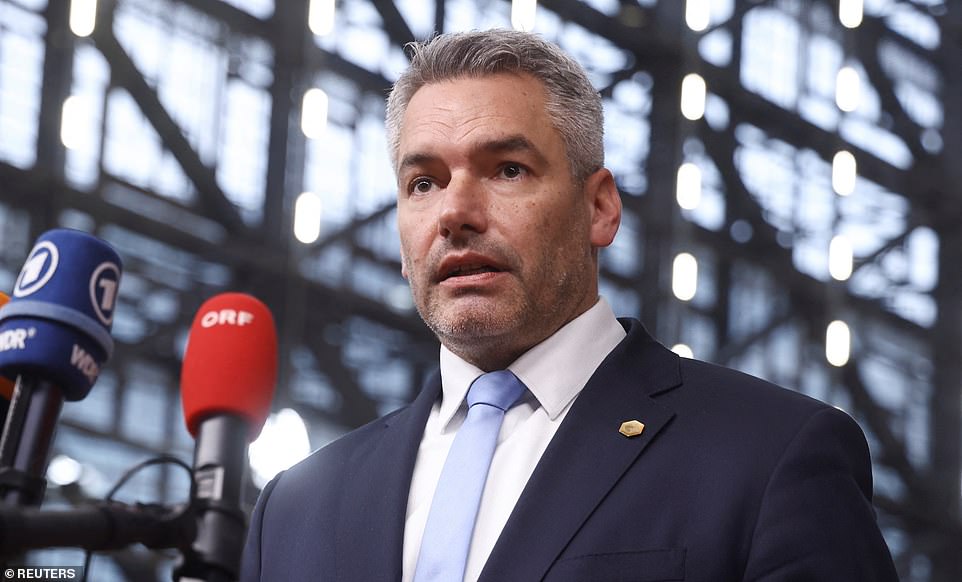 Chancellor Karl Nehammer referred to the move as ‘opening with a seatbelt’ in which each of the country’s nine regions had the ability to loosen or tighten its own rules.

Unvaccinated people, though, are still be subject to lockdown restrictions and should remain at home for all but a handful of specific reasons, such as buying groceries, going to the doctor or exercising.

Belgium made working from home compulsory on 26 November and imposed a six-person limit on people per-table in bars and restaurants.

Private parties were banned, and bars, nightclubs and restaurants where social distancing cannot be accommodated were shut completely.

It comes as Omicron is believed to now account for one in 10 of all new cases in the country.

QR codes may be required to access venues such as museums, theatres, stadiums, shopping centres or restaurants.

The codes are typically issued to those either vaccinated with a Russian vaccine, recently recovered from COVID-19 or with a recent negative PCR test.

Russian authorities, though, backed away from plans to introduce further restrictions for unvaccinated people earlier this week following public outrage.