Killer driver, 21, who mowed down girl, 14, is jailed for six years 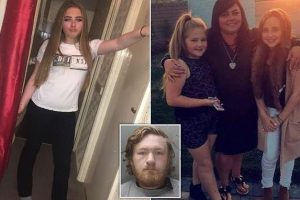 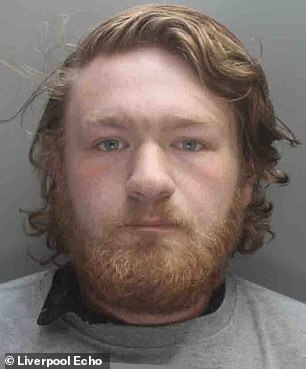 Brandon Turton (pictured), 21, instantly killed Courtney Ellis, 14, when he crashed into the teen while racing his Renault Megane shortly after 9.45pm on September 19, 2020 – before the youngster’s mother discovered her ‘lifeless’ body while passing the crash scene as she drove home from work

The mother of a 14-year-old girl who was mowed down in a hit-and-run has confronted her killer driver at court, telling him: ‘I will never forgive you’ as he was sentenced to almost seven years in prison.

Brandon Turton, 21, instantly killed Courtney Ellis when he crashed into the teen while racing his Renault Megane around St Helens and Haydock shortly after 9.45pm on September 19, 2020 – before the youngster’s mother discovered her ‘lifeless’ body while passing the crash scene as she drove home from work.

Ben Jones, prosecuting, told Liverpool Crown Court how Turton – of Newton-le-Willows – had been ‘showing off or driving in anger’, having made unsuccessful attempts to woo a female passenger.

Courtney, an aspiring midwife, had been hanging out with friends and her now 18-year-old sister when she ran across the road before being fatally hit by Turton’s vehicle at a speed of up to 93mph, sending her ‘flying through the air’.

Turton, who had admitted causing death by dangerous driving, cried as he was jailed for six years and nine months on Wednesday afternoon.

At sentencing, Courtney’s mother Angela Burke described the devastating moment she realised that her daughter had been involved in the fatal collision.

Ms Burke told Turton: ‘The night that you killed my 14-year-old daughter was the most horrific experience I have ever had to go through. It was truly a parent’s worst nightmare.

‘Having to see your lifeless child’s body broken is indescribable. I was on my way home from work when I approached the scene of the incident.

‘It was clear that something serious had happened, with police everywhere. I recall feeling sad for the people involved. Little did I know my own child was lying in the road. I was not there when she needed me most.’

Ms Burke said that after passing the scene, she received a call to say that Courtney had been run over, adding that it was at that point she realised she had just driven past the crash site. 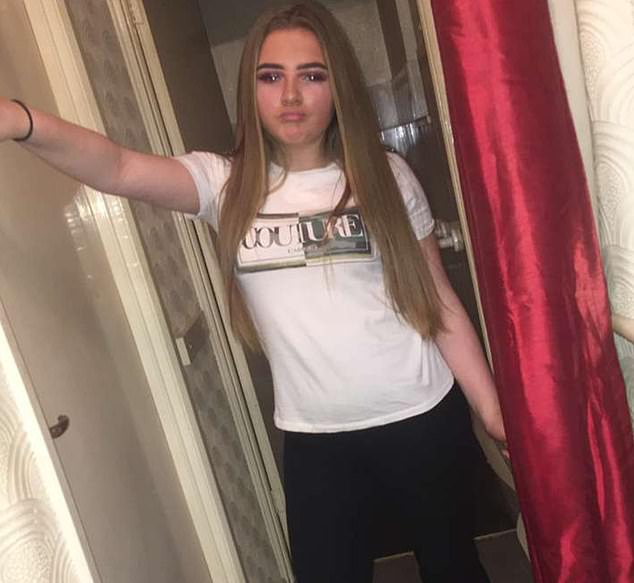 Courtney Ellis, 14, (pictured) an aspiring midwife, had been hanging out with friends and her now 18-year-old sister when she ran across the road before being fatally hit by Turton’s vehicle at a speed of up to 93mph, sending her ‘flying through the air’

The grief-stricken mother-of-four said she was ‘mortified’ when she went to the hospital but that she ‘still had hope’ – before it was ‘shattered’ when doctors said she had died.

Ms Burke said she ‘collapsed with shock’ when she learned of the teenager’s death, adding: ‘I was unable to take in the news I had just been told. I thought I was in a living nightmare and I pleaded with the doctors to tell me it wasn’t true.

‘To this day, I still refuse to accept it. The pain in my heart and stomach is unbearable, but I have to pull myself together in order to care for my other three children – if it wasn’t for them, I truly believe I would not be here now.’

Courtney’s older sister Morgan, now 18, witnessed the horror crash first-hand and has been left ‘traumatised’ by the incident.

Ms Burke added: ‘It must have been truly horrific for her to witness Courtney lying lifeless in the road. They were inseparable, and for Morgan to wake up each day and not have Courtney around is heart-breaking.

‘We as a family are all lost. Courtney was so caring and sensitive.

‘She loved cuddles. Now I will never be able to see my daughter get married or have children of her own.’

Courtney also left behind a brother and sister, who are now aged only four and two.

Ms Burke said: ‘My younger children say goodnight to pictures of Courtney on my wall before they go to bed. They say ‘love you’ and blow kisses to her. I am devastated that they will never get to know their big sister.

‘I will never be the same mum. Everything I do now is for my other children and to try to make Courtney proud.’

She also described her daughter as a ‘beautiful person who loved to have a laugh, cried at sad films and had so much potential in life’.

Ms Burke then told Turton: ‘One day you will get out of prison and be able to live your life. 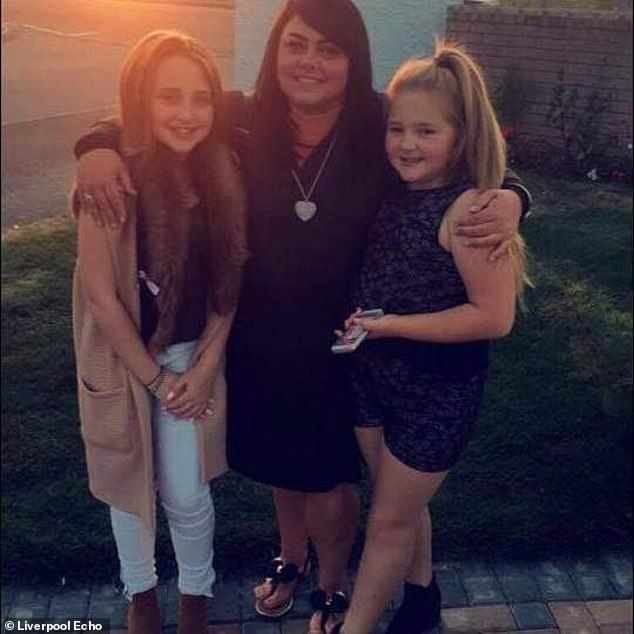 At sentencing on Wednesday, Courtney’s mother Angela Burke (pictured centre while right, Courtney and left, her sister Morgan) described the devastating moment she realised that her daughter had been involved in the fatal collision

‘How can I ever be the same when I had to see my girl lying lifeless in a hospital bed, when the last time I saw her she was full of life? That night changed every single member of my family forever.

‘Every part of my life was shattered. Every single day is painful.

‘I have no choice but to carry on and live with the pain of losing her in such a horrible way. We can never bring her back, but we have to see justice served on the person who took away her dreams, her life and who took her away from a family who loved her so much.’

The court heard Turton had been driving around the area ‘just for something to do’ and met up with a silver Vauxhall Astra being driven by Oliver McIntosh in the car park of Tesco in Haydock.

In the 15 minutes before the incident, the two cars ‘set off in convoy’ and completed a high speed circuit of nearby roads while ‘competing with each other’.

The pair returned to the supermarket before setting off again six minutes later. 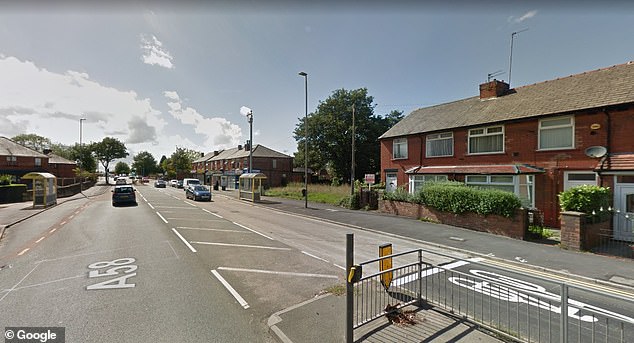 Turton’s friends inside the black vehicle ‘repeatedly told him to slow down’. One of them later describing his driving as ‘awful’.

Another stated that they were being ‘thrown around the car’ as he took corners and roundabouts at speed and overtook other vehicles. He also told the defendant to ‘slow the f*** down’ and said he would get out otherwise.

This witness described how he had been flirting with a woman in the Renault whom Turton had also been interested in romantically – however, she had not reciprocated these feelings and it was ‘apparent he was angered or jealous’. Mr McIntosh too said that he had been ‘driving like an idiot’.

Courtney meanwhile had spent the afternoon in a nearby park with her now 18-year-old sister Morgan and a friend. While the teenager had been drinking, she was described as ‘just being silly’ or ‘giddy’.

The aspiring midwife had ‘had a falling out with a boy and was upset’, and the group sat talking near to the Ship Inn pub for around quarter of an hour before Morgan suggested they head home. As they did so, Courtney ran across the road and was hit by the car and ‘thrown through the air’ before landing in the carriageway.

Turton ‘swerved at the last second’ but was travelling at speeds of at least 73mph, and possibly up to 93mph, on the 30mph road. One of his passengers thought the vehicle was going to flip over as it hurtled onwards towards a dog walker before coming to a stop. 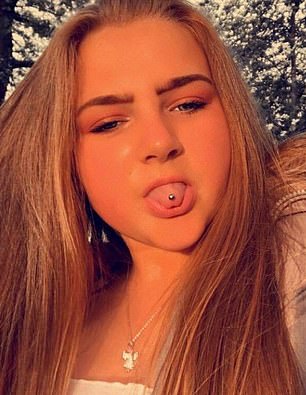 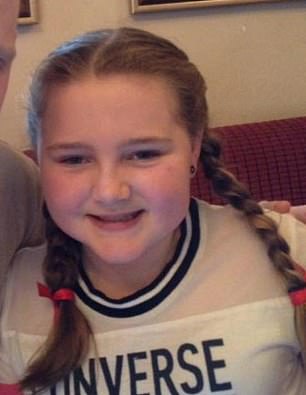 Ms Burke said she ‘collapsed with shock’ when she learned of the teenager’s death, adding: ‘I was unable to take in the news I had just been told. I thought I was in a living nightmare and I pleaded with the doctors to tell me it wasn’t true’

Courtney was described as having ‘little chance to assess her own safety in crossing’. The friend who was present said they ‘did not see or hear the approach of the defendant’s vehicle’ beforehand.

Turton admitted causing death by dangerous driving and was jailed for six years and nine months.

Sentencing, Judge David Potter said: ‘You could not successfully react to Courtney as she stepped into the road.

‘You were simply going far too fast to avoid impact. Your dangerous driving cut short the life of a much-loved daughter, granddaughter and sister.

‘Courtney was a loving child with enormous compassion and promise, who leaves behind a shattered and traumatised family. No-one who has not suffered the sudden loss of a child in circumstances such as these is ever in a position to understand how they feel.

‘No sentence I can impose on you will reconcile the family of the deceased victim to their loss, nor will it cure their anguish. Your driving at grossly excessive speeds involved a deliberate decision to ignore, or a flagrant disregard for, the rules of the road and a disregard for the safety of others.’