King Charles, William, Harry and Andrew wait together at Windsor 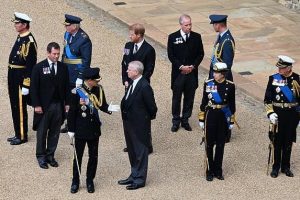 United by their grief for the Queen: The moment stony-faced King Charles, William, Harry and Andrew waited together at Windsor Castle to escort monarch to her final resting place

Extraordinary new photos have emerged of the Royal Family waiting together at Windsor Castle as they prepared to escort the Queen to her final resting place in St George’s Chapel.

The pictures show a family scene that is both ordinary and – given their positions, uniforms and the intensely public nature of their grief – unlike any other.

They also offer a glimpse of the personal dynamics within the Royal Family following the much-publicised breakdown of the relationship between Prince William and his brother, Harry, and the latter’s regularly criticisms of the institution following Megxit.

In the photos, a stony-faced King Charles III stands with a ceremonial sword in one hand, occasionally chatting to fellow royals including Prince Edward.

At other moments, Edward is seen talking to his brother Prince Andrew, and Prince Harry with Peter Phillips, son of Anne, the Princess Royal, as they crossed a immaculate lawn close to St George’s Chapel.

Harry also shares a conversation with Anne and her husband, Vice Admiral Sir Timothy Lawrence. Also present are other royals including Prince William and Lord Linley, one of Charles’ cousins.

The week saw several rare displays of public unity between Harry and William. On September 10, the Duke of Sussex and his wife, Meghan, were invited to join the Prince and Princess of Wales to inspect floral tributes outside Windsor Castle, while yesterday William was seen appearing to direct the couple to their seats in St George’s Chapel. 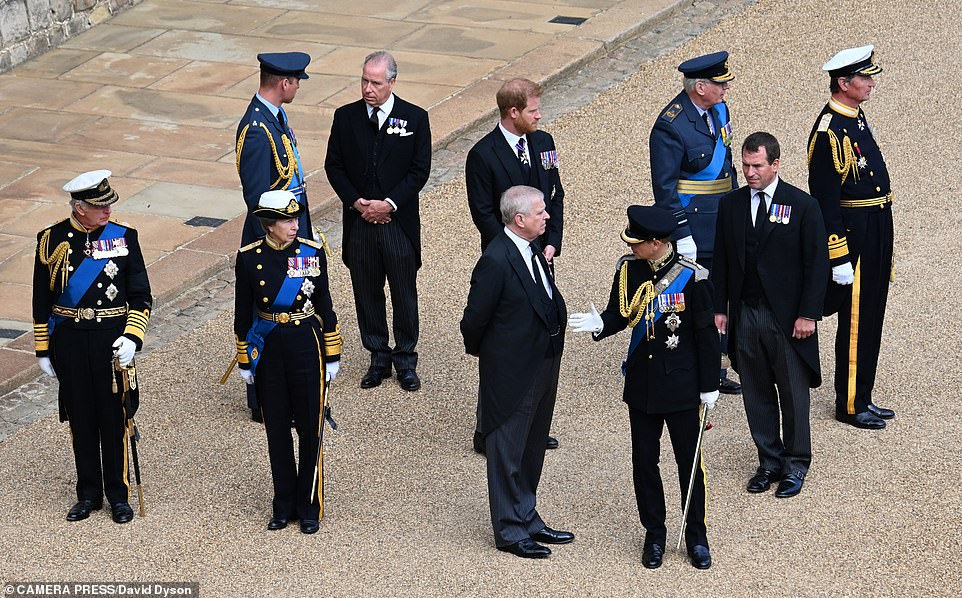 These pictures of the Royal Family waiting at Windsor Castle show a family scene that is both ordinary and – given their positions, uniforms and the intensely public nature of their grief – unlike any other. In this photo Prince Andrew chats to Prince Edward with Peter Philips behind him 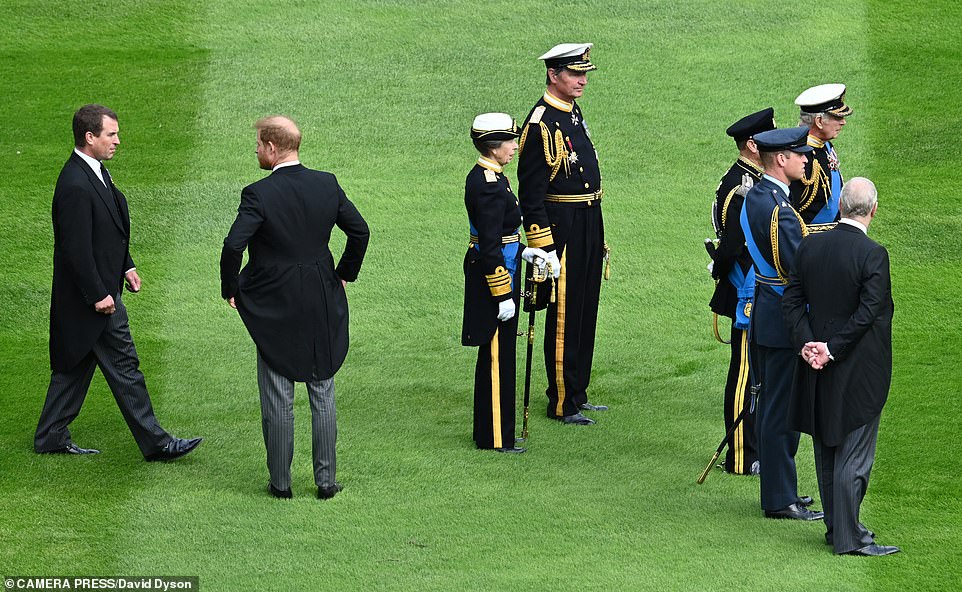 In this photo, Harry chats to Peter while Princess Anne talks with her husband, Sir Timothy Lawrence and King Charles, Edward, Prince William and Andrew stand together 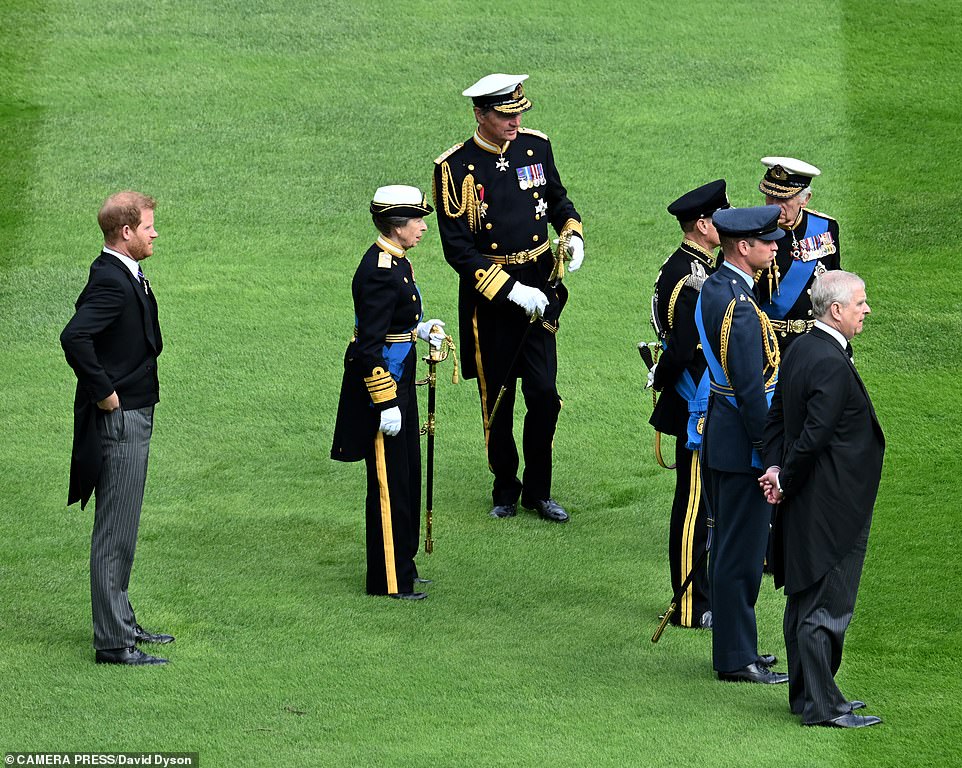 In the photos, a stony-faced King Charles III stands with a ceremonial sword in one hand, occasionally chatting to fellow royals including Prince Edward. Next to Edward is Prince William and Andrew. Also pictured is Prince Harry (left) Princess Anne and Sir Timothy

The service in St George’s Chapel ended with the Queen being finally laid to rest next to her parents, her sister and the Duke of Edinburgh.

Her coffin was placed in the tiny King George VI Memorial Chapel, an annexe to St George’s Chapel in Windsor, with those of Prince Philip, her father George VI and the Queen Mother.

Her Majesty’s wish was to be interred with her parents, her husband and the ashes of her sister Princess Margaret, away from the much larger Royal Vault in St George’s Chapel.

During the televised committal service, her coffin was lowered into the Royal Vault, which contains the remains of 25 royals dating back to the 1800s.

The sovereign’s personal piper Paul Burns, who had been there every morning during her final days at Balmoral, was there at the end, playing during the final moments of public mourning.

He played one last lament while the Queen’s coffin was lowered into the Royal Vault, before later being moved to the King George VI Memorial Chapel along with the coffin of the Duke of Edinburgh.

Their children King Charles, the Princess Royal and their younger brothers Andrew and Edward gathered just after 7pm and were escorted to the memorial chapel without cameras present. 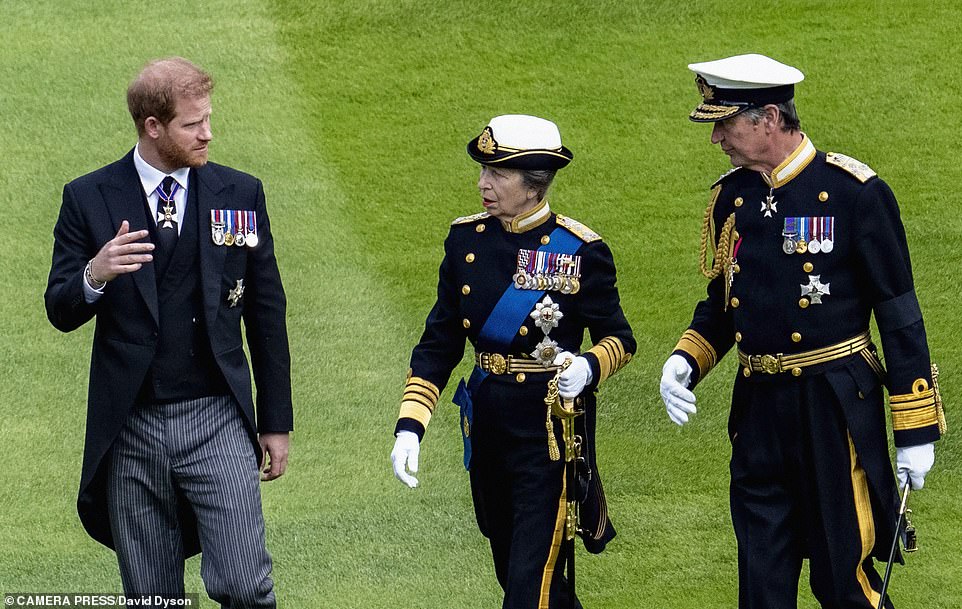 Harry – wearing a morning suit after being prevented from wearing his military uniform, chats with Anne and Sir Timothy 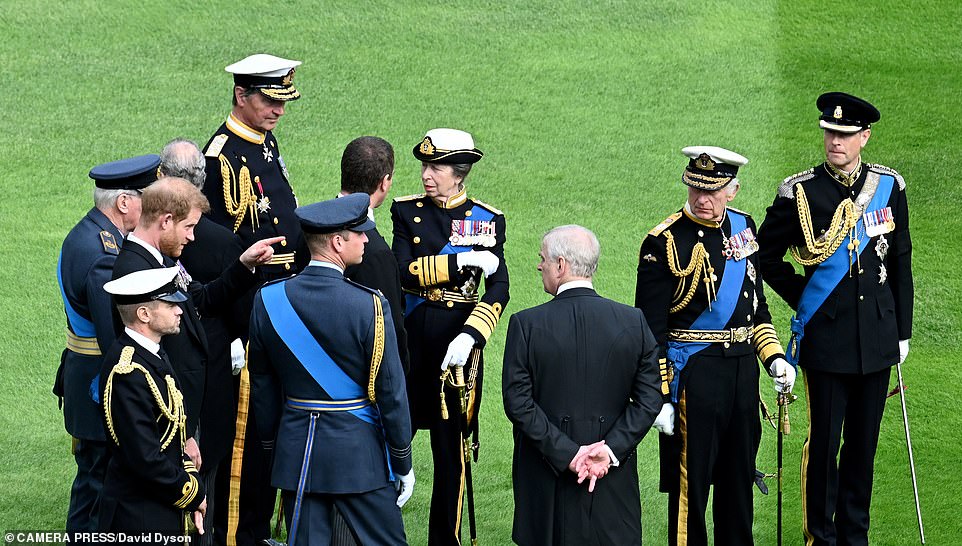 The photos offer a glimpse of the personal dynamics within the Royal Family following the much-publicised breakdown of the relationship between Prince William and his brother, Harry, and the latter’s regularly criticisms of the institution following Megxit 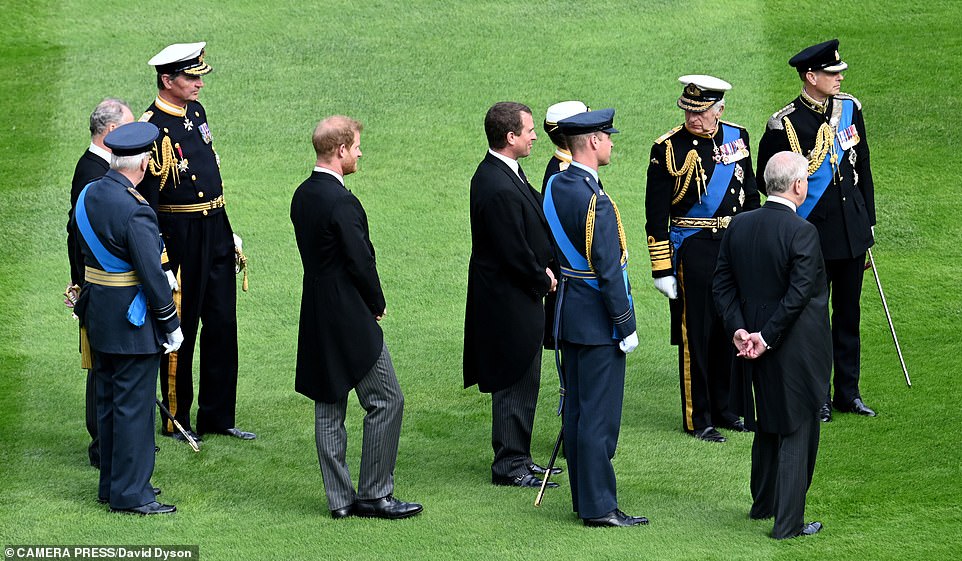 The gathering on the lawn at Windsor Castle was followed by a service at St George’s Chapel which saw the Queen interred with her husband, Prince Philip

After the pomp and ceremony of the earlier State Funeral and committal service, details of the ‘deeply personal’ service were kept private.

The Queen’s father King George VI had referred to his close family as ‘us four’ and they are now all reunited in the chapel.

The memorial chapel was commissioned by the Queen as a burial place for her father after his death in 1952. He had not wanted the Royal Vault to be his final resting place, but his death at the age of 56 was unexpected, and nothing had been prepared.

The Queen paid for the tiny annexe to be added to St George’s Chapel, and her father’s remains were transferred there after its completion in 1969.

Her younger sister Princess Margaret left instructions asking to be cremated so her ashes could be placed alongside her beloved father in the memorial chapel. 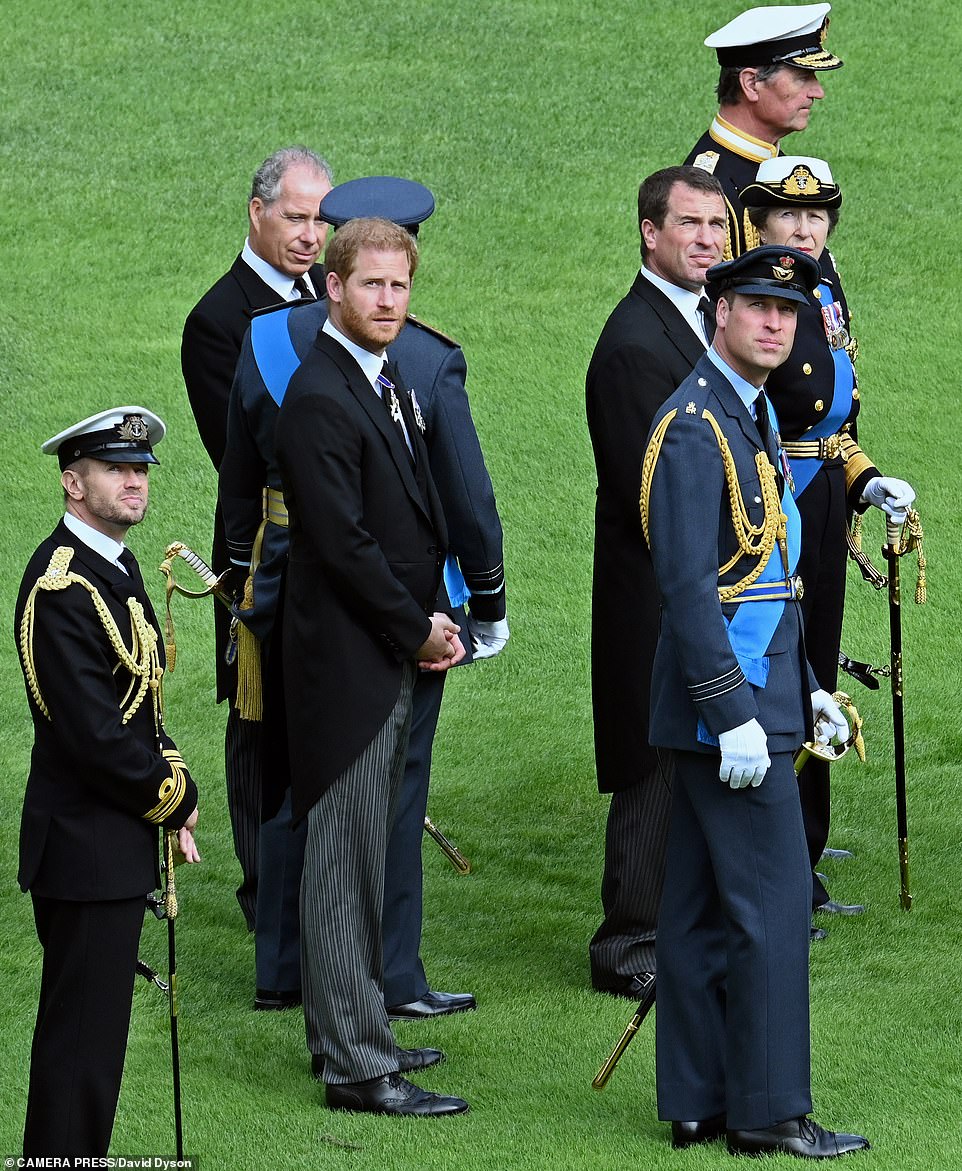 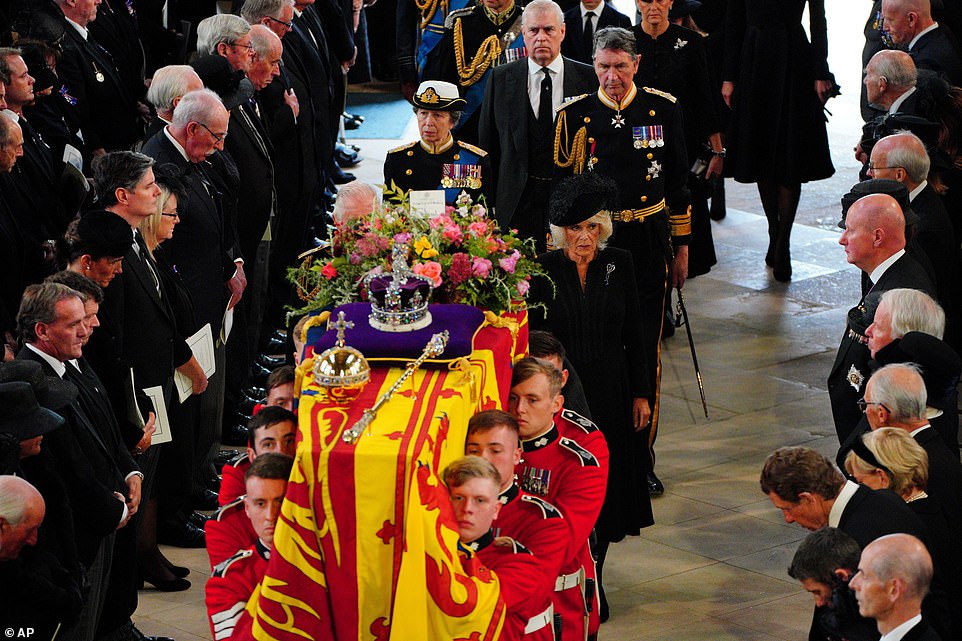 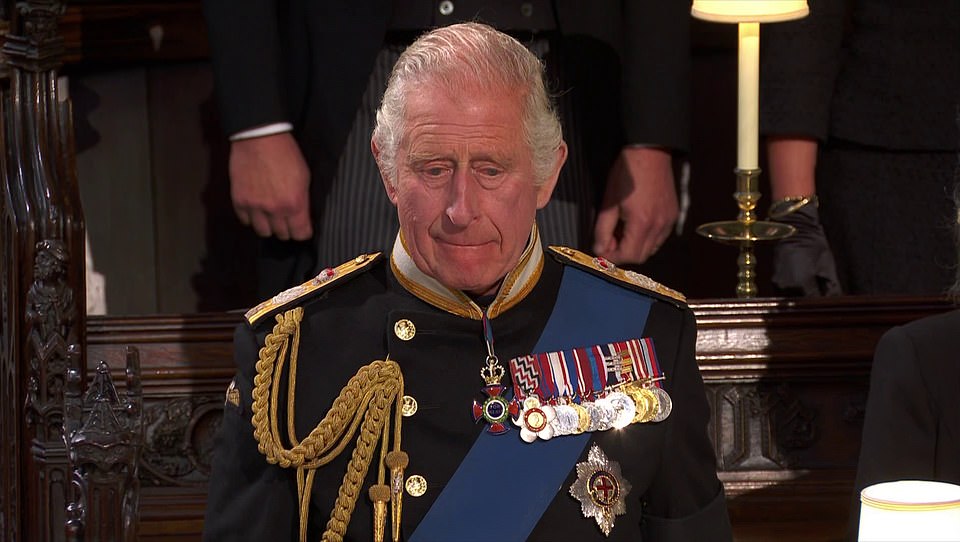 The King looks moved as her mother is finally laid to rest during the service of committal. In a touching tribute to his mother, Charles sat in the same seat the Queen had sat in for the Duke of Edinburgh’s funeral during the Covid-19 pandemic

Her ashes were initially placed in the Royal Vault after her death in 2002 and were moved to the memorial chapel following the death of the Queen Mother just a few weeks later.

The memorial chapel became a place for private contemplation for the Queen, who would visit it when she worshipped at St George’s Chapel.

The main chapel has been the resting place for royals for centuries, dating back to Edward IV in 1483, whose memorial stands in the North Quire Aisle.

Henry VIII’s remains are interred in the Quire, along with those of Charles I. 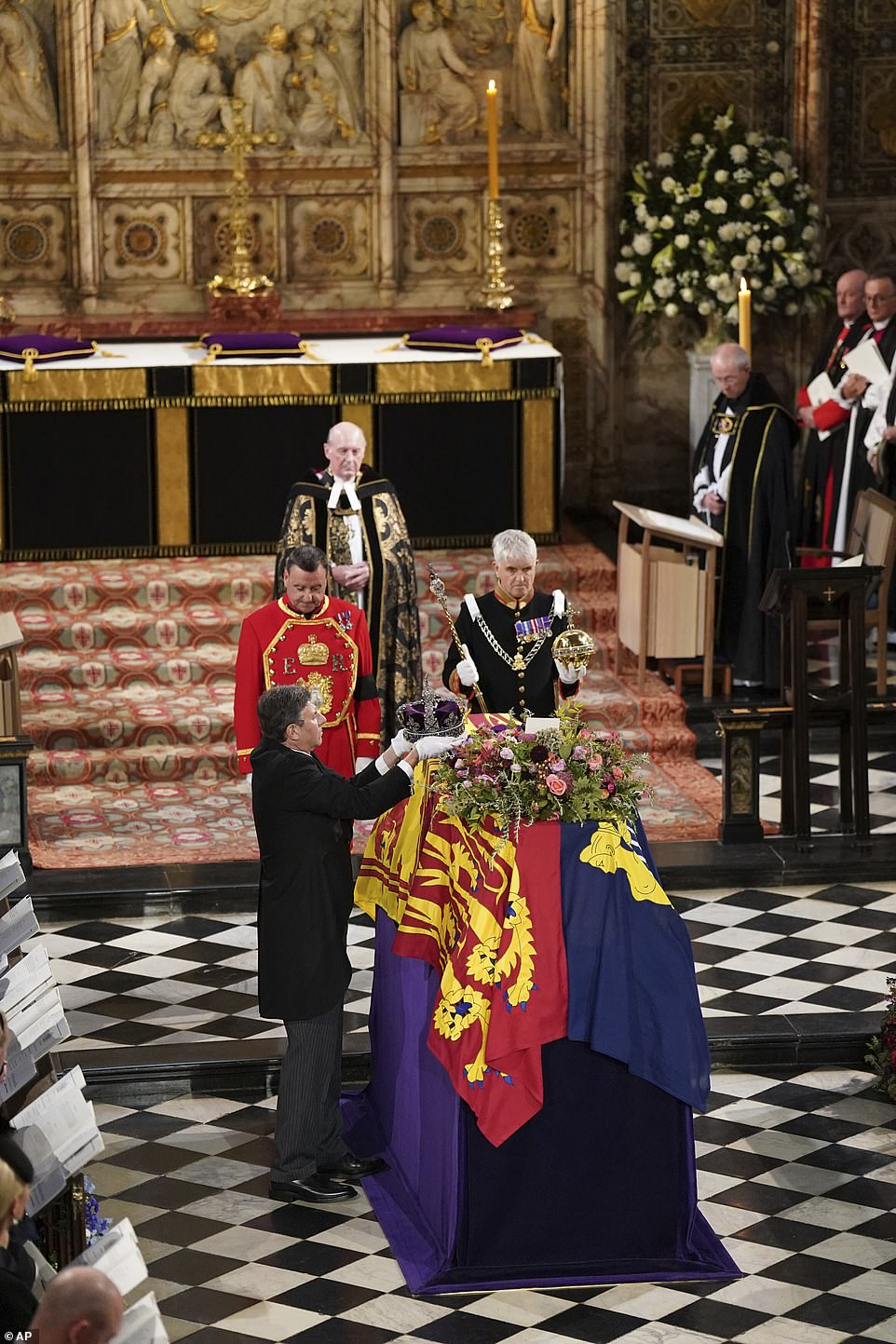 The Crown Jeweller, left, removes the Imperial State Crown from the coffin of Britain’s Queen Elizabeth II as she enters the royal crypt as a ‘simple Christian soul’ 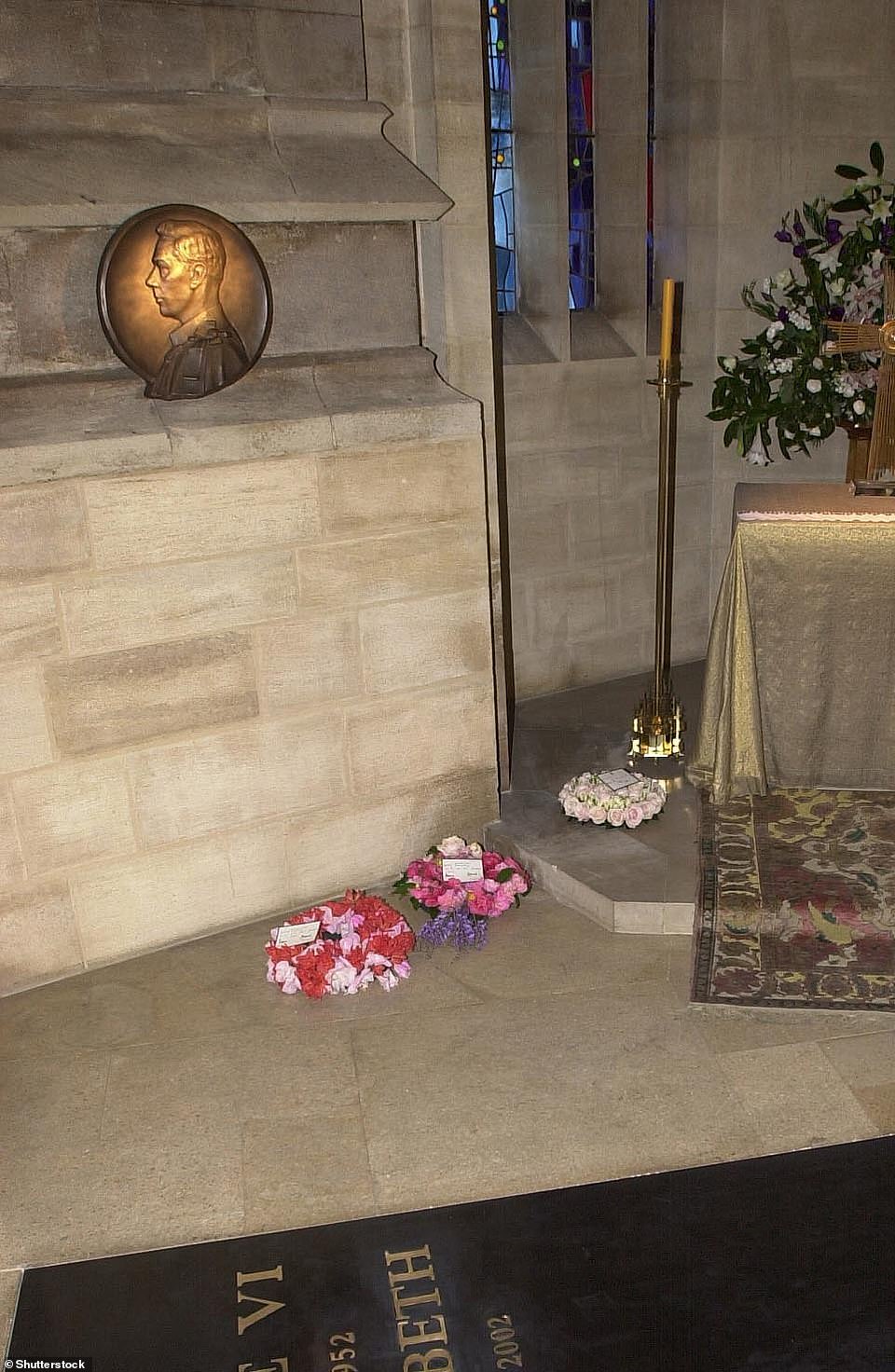 At present, a black stone slab is set into the floor of the King George VI Memorial Chapel. It features the names of George VI and his wife Elizabeth – who died in 2002 – in gold lettering, above the dates of their births and deaths.