Lady Lavinia Nourse, 77, describes 'sheer terror of being in a court' 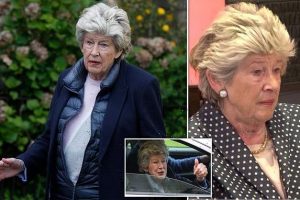 ‘I’ve never been so frightened and lonely’: Lady Lavinia Nourse, 77, describes ‘sheer terror of being in a court’ as she speaks to BBC Women’s Hour about false sex abuse allegations and says she is ‘left with a shattered life’

Lady Lavinia Nourse has described the ‘shame and sheer terror’ of facing her accuser in court during an emotional interview after she was cleared of false sex abuse allegations.

In May, the 77-year-old widow of Sir Martin Nourse – one of Britain’s most senior judges – was found not guilty of all 17 fabricated sex abuse charges regarding a boy under the age of 12.

She defiantly denied the historical offences had taken place, claiming that her accuser – who is now an adult – was ‘very psychologically disturbed’.

Now, Lady Lavinia has spoken out about the ‘deep shock’ that left her ‘almost incoherent’ when her accuser – who cannot be named – took her into a London park to inform her of his made-up accusations.

In an emotional interview on BBC Radio 4’s Woman’s Hour, she told host Emma Barnett of the trauma of facing a judge wearing ‘the sort of clothes that my husband used to wear’ as she stood up in court.

She said she had ‘never been so frightened, lonely and utterly miserable’ than she was during the trial, and stressed that, although she was cleared, she has been ‘left with a shattered life’. 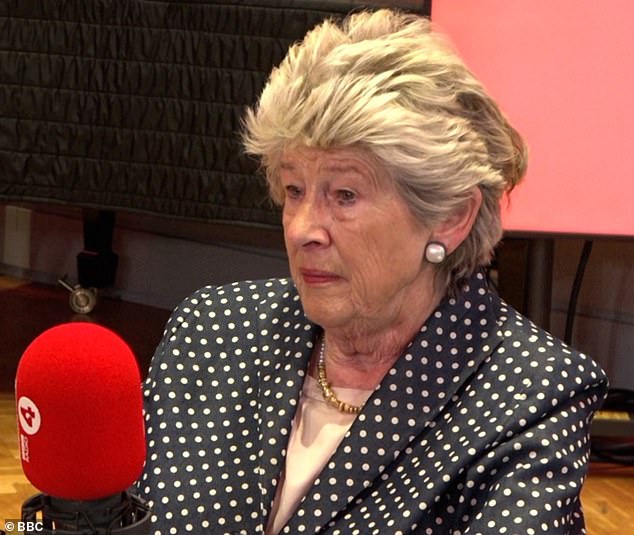 Lady Lavinia said: ‘You can imagine that because my husband was such a senior lawyer that the shame and just the sheer terror of being in a court and looking at a judge who, in the sort of clothes that my husband used to wear […] you can’t imagine what that’s like for someone who’s lived in the law all her life.

‘Never in my wildest dreams did I think I would find myself in that position.

‘Just to look at the papers, the Crown Prosecution papers. I mean to see that in print was almost enough to finish me let alone the actual process.

Talking about the moment she first heard of the false allegations, Lady Lavinia said: ‘I had been in London and the accuser took me into a public park and simply blurted out the news that I had abused him as a young child. 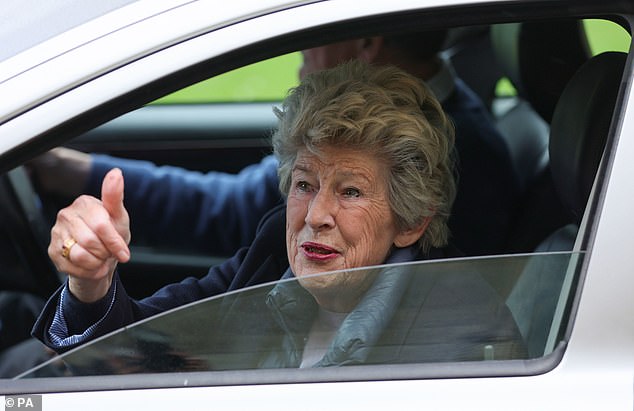 In May, the 77-year-old widow of Sir Martin Nourse (pictured after she was cleared) – one of Britain’s most senior judges -was found not guilty of all 17 fabricated sex abuse charges regarding a boy under the age of 12

‘For starters, I didn’t even know what abuse between a woman and a young boy could be because I’m of an age when one doesn’t understand these things.

‘I couldn’t understand what he was talking about. It was something so alien to me. I was so shocked, so deeply shocked I was almost incoherent.

‘You can’t imagine what’s it’s like to be told something so devastatingly awful. It was ghastly, absolutely ghastly.

With her voice beginning to crack, she said: ‘It’s difficult for me talking to you because I know who accused me.

‘But of course I can’t say who accused me and this makes conversations with people like you and anybody else extremely difficult because I can’t be honest and frank.

‘And that’s what makes it so appalling. And makes things like this so difficult because I can’t be truly honest about it.’

The accuser later went to the police and Lady Lavinia was hauled in for an interview, she which she dubbed ‘the most awful, awful experience’.

She told her the accuser had ‘taped’ all their previous discussions.

Even so, Lady Lavinia did not think the accusations would end up in court. She waited a year and a half for charges to be brought against her. 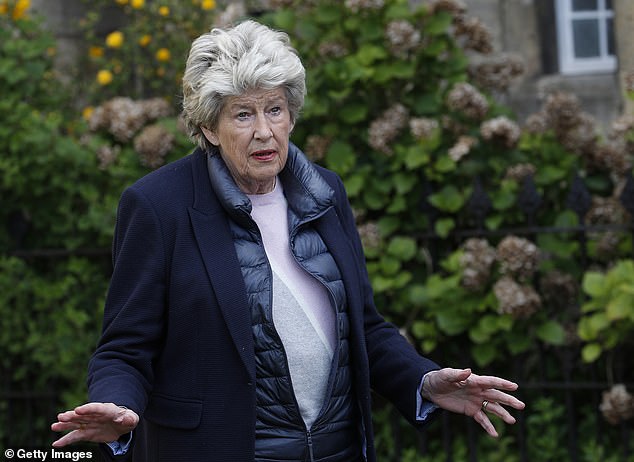 Lady Lavinia (pictured) defiantly denied the historical offences had taken place, claiming that her accuser – who is now an adult – was ‘very psychologically disturbed’

She added: ‘The accuser was very happy to let it be known widely in London and in and around Newmarket where I live, freely admitting that this is what I had done.

‘And so a lot of my friends had been told of what I had done long before I was charged. When I was interviewed by the police they said “we’ve got a list of the people that have been told”.

‘You disappear into your house and try to keep strong and stay there but it’s not easy. The problems I had, and lockdown it was just intolerable.

‘God’s given me the strength to deal with this. But I don’t quite know how I’ve got through it.’

Asked to describe her trial, she said: ‘Hell. That’s all I can say. I’ve never been so frightened, lonely and utterly miserable. 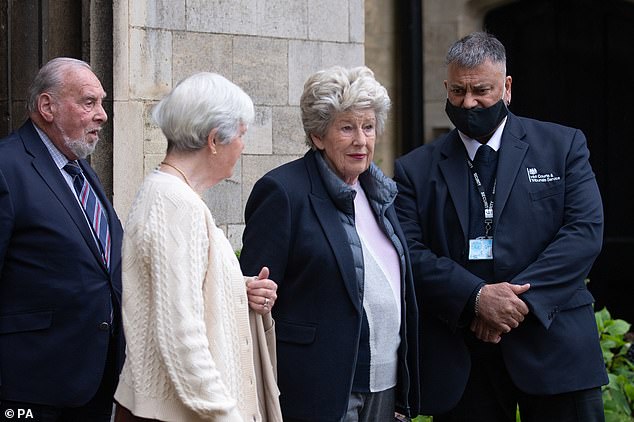 ‘It was terrifying and of course knowing I suppose if it hadn’t gone that way I could have gone to prison.

‘Luckily my legal people were very gentle with me. I asked the question but they very carefully sort of skirted around it. They didn’t say no and they didn’t say “yes you will go to prison”.

‘But I knew perfectly well that there was a very high chance that if I was found guilty that I would go to jail.

‘And I just find it really frighting that people can tell lies that can send an innocent person to prison. That’s what would have happened.

She told how the complainant opted not to be behind a screen in court, meaning Lady Lavinia had to face him ‘face to face’.

She said: ‘It was horrendous. He was as close to me as you are now. I had to sit for the best part of a day and a half and listen to all the ghastly things that were said about me.

‘Its just horrendous that’s all I can say. It’s a nightmare. Absolute nightmare.’

She said the fewer than five hours taken for the jury to deliberate were ‘the worst of my life’.

‘I’d been like that for weeks. They almost had to drag me back into the court because I was so frightened. Absolutely petrified of what’s going to happen.’

On how it felt hearing she was cleared, Lady Lavinia said: ‘I just still didn’t believe it. I had to go through 17 times not guilty. After the first one I almost collapsed. In fact I did collapse. It just took me days to believe it.

‘Sometimes even now I don’t believe it. I know that might sound strange but when you live with something for so long and the fear and the trauma of what might happen it doesn’t go overnight.’

She said she is still ‘playing with nightmares’ months on. 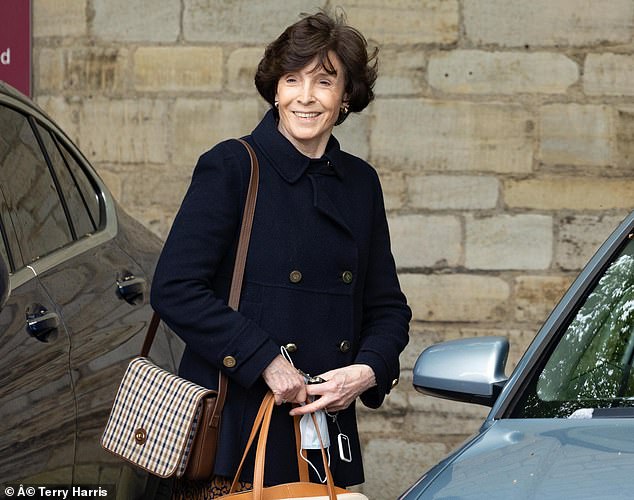 Dame Mary Archer appeared as a character witness , describing Nourse as ‘kind hearted’ and ‘generous’, a keen flower arranger and hostess who doted on her grandchildren

She added: ‘I’m left with a shattered life. Which I have to pick up and hold my head up. But what’s been said, what’s been written, will live with me forever.

‘And yet the person who has made these accusations walks free and can continue to say what he likes for the rest of his life.’

Talking about her husband, she said: ‘To say that he knew about it and didn’t do anything was beyond belief.

‘And at the end of the day I have to live with what was being said. But at least he’s been cleared. And there’s no question about whether he knew about it because there’s nothing to know.

‘I’m left with the mess but luckily his name is cleared. And to me that is the most important outcome. I can’t help myself or my circumstances but at least he has been cleared.’

She now hopes to change the law for those charged with such offences to be given anonymity until convicted.

She also questioned why those who make false accusations cannot be named after the person they accused is cleared.

Lifelong anonymity is granted to anyone who makes an allegation that they are the victim of a sexual offence, but suspects can be named when charged, even if they ultimately end up being found not guilty.

As a result, Lady Lavinia is joining the likes of Sir Cliff Richard and Paul Gambaccini – two other falsely accused public figures who, although never charged, saw their reputations tarnished regardless – in backing the FAIR pressure group.

The group which campaigns for those accused of child sexual abuse to not be named in the press until and unless found guilty.