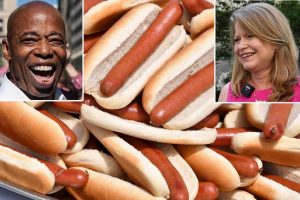 New York City voters might not relish seeing mayoral wannabes stuff their faces with hot dogs, but after the way the Board of Elections botched the initial ranked-choice vote counting, maybe it’s not such a bad idea.

With that in mind, the professional eating league that hosts the Nathan’s Famous Coney Island hot dog eating contest joked Thursday that the City Hall hopefuls scarf down wieners and buns on July 4, in a face-off that would determine the Democratic primary’s winner.

“We view this as a patriotic service to New York City that will bring certainty to a laborious and potentially fraught vote-counting process,” Major League Eating Chair George Shea said, in a bid to both solve the city’s primary dilemma and promote his annual rite of summer off the Coney Island boardwalk.

“MLE’s integrity is unquestioned, and the organization has deep experience adjudicating complex and difficult contests.”

All candidates who have not conceded in the race — Eric Adams, Kathryn Garcia and Maya Wiley — are invited to a three-minute, all-you-can-eat gobble-down on Sunday. Though Adams holds a slight lead over Garcia in preliminary results, Garcia and Wiley would have an opportunity to play ketchup and become voracious victors if the pair of contenders don’t think mail-in votes would do so, under the tongue-in-cheek Independence Day proposal.

In a trolling letter sent Thursday to the election-bungling Board of Elections, Shea promised to “swiftly resolve” the primary’s outcome, with the wolf-down winner becoming New York City’s Democratic nominee for mayor.

“We view this as a patriotic service to New York City that will bring certainty to a laborious and potentially fraught vote-counting process.”

“This contest would replace the current vote counting effort, with the winner becoming the general election candidate,” reads the letter.

“Competitors would have the option of competing by eating the classic Nathan’s all-beef franks or with Nathan’s new vegan dogs,” Shea wrote.

The winner in the contest, held at the Brooklyn Cyclones’ Coney Island home stadium, would face off against Curtis Sliwa, the Republican nominee, in a November general election chow-down match-up, Major League Eating suggested.

“I’d be game for anything,” Sliwa told The Post Thursday. “I think it’s great.”

“I was the world pickle eating champion four years in a row, back between 1998 and 2002,” he recalled. “I have competed. In fact, in 1996, I finished third, eating 16 hot dogs, which nowadays wouldn’t even get you to qualify for the main contest.”

The city elections board sent the mayoral race into chaos on Tuesday, when it released ranked-choice voting results on its website that included 135,000 more votes than New Yorkers had cast, which Adams’ campaign flagged. After hours of confusion, the embarrassed BOE explained the error late Tuesday.

“It has been determined that ballot images used for testing were not cleared from the Election Management System (EMS),” the board said in a tweeted statement about the snafu.

“When the cast votes were extracted for the first pull of RCV [ranked choice voting] results, it included both test and election night results, producing approximately 135,000 additional records.”

The board on Wednesday released corrected results, which showed an outcome nearly identical to the one with the junk ballots.