Two cases of the Omicron variant have been detected in returned overseas travellers in WA hotel quarantine.

The news comes as the West Australian government announced it would reclassify NSW as an ‘extreme risk’ state on December 18, after daily new cases there surged past 1300. This will make it even harder for people in NSW to enter the state. 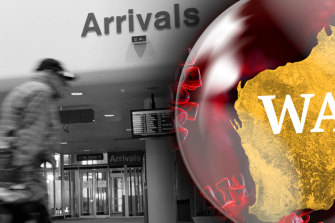 NSW will again be classified as ‘extreme risk’ to WA. Credit:WAtoday

The reclassification removes WA Police discretion to allow West Australians currently in NSW to return to the state, except for in extraordinary circumstances.

NSW was downgraded to ‘high risk’ on November 3 but WA Premier Mark McGowan said that he wanted to keep his state COVID-free while its double dose vaccination rate was still shy of the 90 per cent target for people aged 12 and up.

“As NSW has been at ‘high risk’ for some time now, many who would have wanted to return to WA for the end of the year would have arrived already to ensure they are undertaking their 14 days of self-quarantine under the ‘high risk’ rules,” he said.

“This is not a situation to take lightly and it is necessary because my priority is the health of Western Australians, first and foremost.”

Mr McGowan also revealed his government would halve its international arrivals cap on December 23 from 530 arrivals per week because of the advent of the more transmissible Omicron variant of the virus.

“Anyone else approved to travel within the limited ‘extreme risk’ rules will be undertaking 14 days of hotel quarantine to better protect WA, and this is why it’s important we keep capacity in our hotel quarantine system and why we are halving the international arrivals cap,” he said.

NSW Health Minister Brad Hazzard warned that cases were expected to hit 25,000 new infections a day by the end of January.

On Monday Mr McGowan announced the state’s COVID transition plan, which will see its hard border policy dropped on February 5.

However, to enter the state travellers must have returned a negative PCR test in the three days before arrival and they must undertake another test within two days of arrival.

WA Health Minister Roger Cook confirmed on Tuesday the cost of the test taken outside of the state would be borne by the traveller.