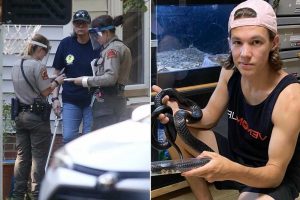 Snakes in a drain! Man bitten by neighbor’s escaped python while on the can

Deadly zebra cobra captured after days on the loose in Raleigh

The owner of a deadly cobra that busted out of a North Carolina home is facing dozens of criminal charges in the snake’s slippery escape, police said.

Christopher Gifford, 21, of Raleigh, was hit with 36 misdemeanor counts for allowing the venomous zebra cobra to flee the basement of his parents’ home, the Charlotte Observer reported.

The zebra cobra — which are native to Africa and can spit venom up to nine feet — was spotted on a porch on June 28 before it was captured about a half-mile away from Gifford’s home by Raleigh animal control officers two days later.

Police searched Gifford’s home and removed something in a large plastic bucket on June 29, one day before the snake was corralled, the newspaper reported.

Gifford’s TikTok account, which has nearly 500,000 followers, features dozens of videos of him handling venomous snakes. They include a green mamba that bit him in March — requiring anti-venom from a South Carolina zoo, the Observer reported last month.

“In all honesty I shouldn’t have lived and I thank God that I’m here today,” Gifford wrote on a Facebook group called The Venom Interviews, which detailed the bite to his left hand.

Gifford is facing 36 misdemeanor counts for keeping venomous snakes in improper enclosures and three charges for having them in mislabeled containers. He was also charged for not notifying police of the escaped cobra, as required by state law, the newspaper reported.

North Carolina has no law prohibiting people from keeping, breeding or selling non-native venomous reptiles, but does have regulations on how they should be kept, as well as on reporting escaped animals.

Snakes must also be kept in escape-proof enclosures with locks on them and labels indicating they are venomous, the newspaper reported.

Raleigh City Council Member David Knight said he plans to introduce an ordinance restricting ownership of wild animals, including venomous snakes, following the cobra’s escape. Police have not said exactly when Gifford’s pet got out, according to the report.

The snake aficionado is remorseful and understands the panic the escaped cobra caused to neighbors, attorney Anna Felts said, adding that 75 other snakes, including some venomous species, were removed from Gifford’s home last week.

Residents of the neighborhood where the snake had been on the loose said they were worried about their children and pets.

“It is pretty alarming,” Mark Pavlic told WRAL. “It seems like a pretty dangerous snake, and dogs like to sniff the grass and check things out. It’s an extreme worry.”