Police hunt man after woman, 21, is 'sexually assaulted on bus' in West London

COPS are hunting for a man after a woman, 21, was allegedly sexually assaulted on a bus in West London.

Metropolitan Police detectives have released a CCTV pic of a man they are keen to identify after the alleged incident on a bus in Kingston. 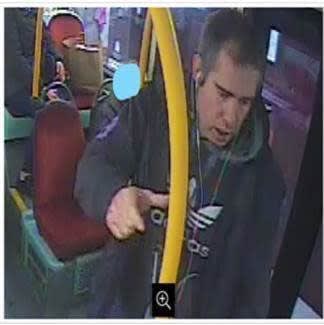 A spokesman said that on May 7, at about 4.40pm, the alleged victim boarded the route 418 bus in Kingston heading towards Epsom.

She sat in the row of seats behind the exit doors beside a window.

A short time after sitting down, a man boarded the bus.

He asked to sit next to the woman and she indicated that this would be OK, the spokesman added.

It's alleged that the man then put his hand on the passenger, and started to "touch her inappropriately on her leg", according to the spokesman.

The woman stood up and moved, allegedly telling him to stop touching her.

Another passenger spoke to the bus driver, who then removed the man from the vehicle.

Det Ch Insp Michael Dougall said: "If you recognise this man or have any information about his whereabouts, please contact police right away.

"It is vital we identify him. No piece of information is insignificant and could help us in our investigation."

Anyone who can identify him is asked to tweet @MetCC or call 101 referencing CAD 1209/17AUG.

Or, to remain anonymous, contact the independent charity Crimestoppers on 0800 555 111.