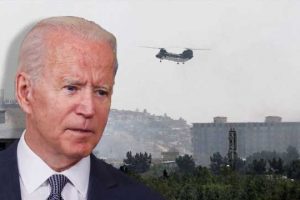 The war in Afghanistan has been an extremely long conflict since the United States invaded the country in 2001, in order to drive the Taliban from power. After a messy exit, the U.S. occupation in Afghanistan has been compared to mistakes made during the Vietnam War. Now that U.S. forces have left Kabul in great numbers, reports show that the New York branch of the Federal Reserve has confiscated $10 billion worth of the Afghanistan central bank’s assets. Moreover, last week the Biden administration halted dollar shipments that were headed to Afghanistan.

The Afghanistan War that the U.S. participated in has been a long-running foreign policy embarrassment for American bureaucrats who backed the invasion. 2021’s “fall of Kabul” has been a messy exit and critics of the United State’s military-industrial complex have compared the Afghanistan War to the Vietnam War. Addressing the American public, president Joe Biden explained that despite the “messy” exit, “there was never a good time to withdraw U.S. forces.” However, since the exit, the number of U.S. troops being sent back to Afghanistan has risen to 6,000. Additionally, the U.S. is still leveraging financial warfare as the Afghanistan central bank’s $10 billion in assets are being held by the U.S. and allied forces. According to reports, the central bank of Afghanistan’s assets included $1.3 billion in gold and $361 million in international currencies. Afghanis have zero access to these funds because the assets are being held in financial institutions like the New York branch of the Federal Reserve (FRBNY).

FRBNY holds afghani gold bars worth $1.3 billion which account for more than half of the Afghan central bank’s gold reserves. A consolidated statement indicates that FRBNY holds roughly $6.1 billion of all assets. The Afghan central bank won’t be seeing these funds any time soon as the American government believes it would fall into the hands of Taliban forces. Moreover, last week the Biden administration halted shipments of U.S. dollars being sent to Afghanistan to keep the funds away from Taliban members.

NY Fed, US Banks, and the Biden Administration Work to Prevent Access to Afghani Funds

Sources familiar with the matter say the U.S. has an Afghani financial blockade set up as the Federal Reserve and other U.S. financial institutions are “working to prevent” access to the funds. For some reason, the Biden administration and allied forces wholeheartedly believe the bank assets of the Afghan government should be policed and sanctioned. “Any central bank assets the Afghan government has in the United States will not be made available to the Taliban,” a Biden administration official remarked to the press.

The added forces since the so-called departure from Afghanistan and the economic sanctions show the U.S. is not willing to pull out from policing the world so easily. Afghanistan will likely have issues with the financial system monopolized by the global central banking system the same way many other nation-states are excluded because of the opinions of the American bureaucracy. Nation-states like North Korea, Venezuela, Turkey, Iran, and now Afghanistan will feel the wrath of financial weaponry and economic exclusion.

The subject of the Biden administration halting dollar shipments this past week was a popular topic on the bitcoin-focused Reddit forum r/bitcoin. Many believe Satoshi Nakamoto’s invention was created to bypass the opinions of financial central planners and the whims of bureaucrats.