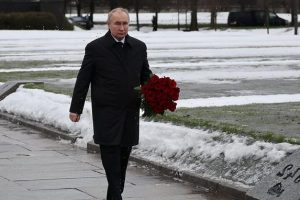 Vladimir Putin has said Russia’s victory in Ukraine ‘is assured’ and claimed he is trying to end the war that has continued in the Donbas, where Moscow-backed separatists have been battling Ukrainian forces since 2014.

In televised remarks to workers during a visit to a weapons factory in his home town of St. Petersburg, the Russian President told workers and reporters: ‘Victory is assured, I have no doubt about it.’

He also claimed that Moscow’s invasion was intended to stop a ‘war’ that has been raging in eastern Ukraine for many years.

He claimed Russia has long sought to negotiate a settlement to the conflict in Ukraine’s eastern industrial heartland of Donbas. 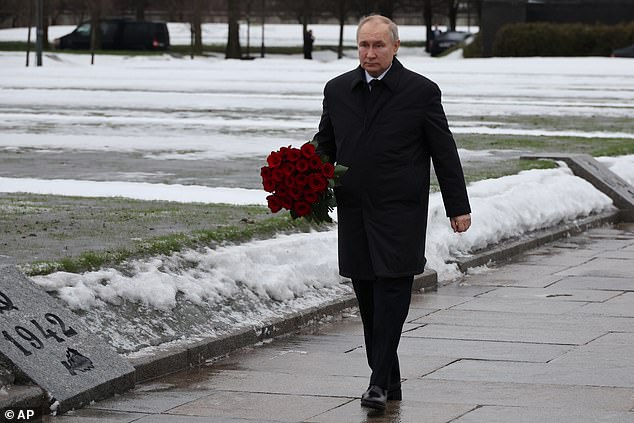 Vladimir Putin has said he has ‘no doubt’ that Russia will be successful in Ukraine. Pictured: Putin attends events marking the 80th anniversary of the break of Nazi’s siege of Leningrad (now St. Petersburg) in the city on Wednesday

Putin ordered the invasion of Ukraine on February 24, and has since been drawn into a protracted conflict. Since pushing Russian troops back from Kyiv last year, Ukraine has inflicted a series of embarrassing defeats on Putin’s generals.

‘Large-scale combat operations involving heavy weapons, artillery, tanks and aircraft haven’t stopped in Donbas since 2014,’ he said. ‘All that we are doing today, as part of the special military operation, is an attempt to stop this war. This is the meaning of our operation – protecting people who live on those territories.’

Putin has explained his decision to send troops into Ukraine on Feb. 24 by the need to protect Russian speakers and conduct ‘demilitarization’ and ‘denazification’ of Ukraine to prevent it from posing a threat to Russia – claims rejected by Ukraine and its Western allies as a cover for an unprovoked act of aggression.

Also on Wednesday, Putin attended the meeting with veterans during Wednesday’s visit to St. Petersburg to mark the 80th anniversary of the Red Army breaking the Nazi siege of the city on Jan. 18, 1943.

The siege of the city that was then called Leningrad lasted nearly 900 days and was only fully lifted in January 1944, marking one of the bloodiest pages of World War II.

About 1 million people died in Leningrad during the siege, most of them from starvation.

Putin on Wednesday laid a wreath at the city’s Piskaryov memorial cemetery where 420,000 civilian victims of the siege and 70,000 Soviet soldiers were buried.

He also put flowers in a section where his brother, who died as a child during the siege, was buried in a mass grave.