A pair of bitter brothers who filmed themselves on an excavator destroying their late mother’s house amid a feud with their sister, have each been fined $10,000.

Malcolm and Garry Taylor were so aggrieved that their sister, Kerrie, planned to sell their mother’s house in Murtoa, in western Victoria, that they drove from Queensland, hired an excavator and ruined the house the day before the planned auction. 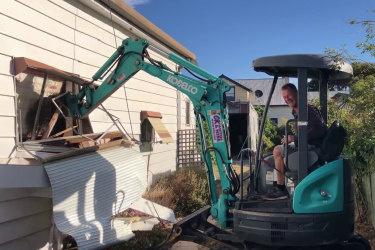 Malcolm Taylor uses an excavator to damage his late mother’s house in Murtoa.

The brothers’ actions on March 28, 2019 – which included filming themselves laughing as they wrecked some of the outside walls, the verandah, front fence, spraying graffiti inside and removing a water tank and stove – rendered the house unsellable and meant they and Kerrie were denied equal shares of an expected sale of about $70,000.

In the minutes after damaging the house, the brothers told police about the family dispute and how they wanted to “make sure the renovations were right before tomorrow”, the County Court heard on Friday.

Then Malcolm sent a text message of a photograph of the damage to Kerrie with the message: “Renovations have begun.”

That night the men watched an AFL game at the MCG and Garry posted a photograph of the pair on Facebook with the words: “A few beers at the footy after a hard day’s renovating.” 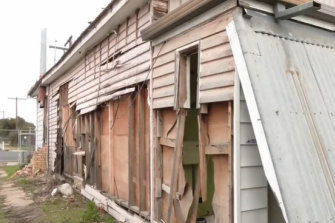 The house after Malcolm and Garry Taylor damaged it with an excavator.

They stayed at a Tullamarine hotel that night and planned to fly back to Queensland but the next morning were arrested and spent several days in police cells before they were bailed.

Their feud with their sister dated back to the time after their mother, Lois, died in 2013, as the brothers opposed Kerrie’s position as the executor of their mother’s estate, judge Michael Cahill said.

The brothers contested their sister’s position in court after their mother’s death and claimed Kerrie hadn’t administered funds from the estate to the brothers’ children. By 2015 the parties had agreed to co-operate, the court heard, but by late 2018 Malcolm told a real estate agent he would not allow his sister to profit from selling the house.

Garry, 59, and Malcolm, 57, pleaded guilty to theft and criminal damage and the court heard their case had attracted attention from media from across the world.

“Your senseless rampage has drawn national and international press coverage,” Judge Cahill told them on Friday.

“You were laughing while you destroyed yours and your sister’s inheritance.

“Now the world is laughing at you for your stupidity.”

Judge Cahill said the pair’s offending was planned and calculated and while serious, there was only a modest financial loss involved. The brothers had agreed to compensate their sister for her financial loss.

The judge accepted fines with convictions were suitable penalties as both men had health problems that were at risk of worsening if they were jailed, that they had raised families and run businesses and were of good prior character, except only for minor offending more than 20 years ago.

The brothers were raised in Murtoa but now live in Queensland and watched Friday’s hearing on a video link from a court in Hervey Bay.

Judge Cahill said he would have jailed the men had they fought the charges and been found guilty at trial.