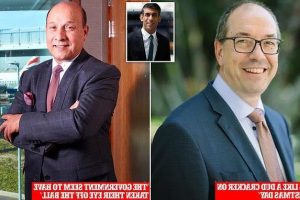 Rishi’s £1BN bailout is branded ‘dud cracker’: Hospitality firms say Chancellor’s £6,000 support is ‘not even a sticking plaster’ to cover losses after thousands of cancelled bookings… and more feared in New Year

Rishi Sunak’s £1billion bailout for Britain’s hospitality industry to help firms hit by a collapse in Christmas bookings over recent weeks was today branded a ‘dud cracker’ and not even a ‘sticking plaster’ by hotel bosses.

The Chancellor has come forward with additional help for the hospitality and leisure sectors in England following days of urgent lobbying from MPs, firms and industry officials following the rise of the Omicron Covid-19 variant.

It includes one-off grants of up to £6,000 per premises for businesses in the affected sectors in England, which the Treasury expects will be administered by local authorities and to be available in the coming weeks. 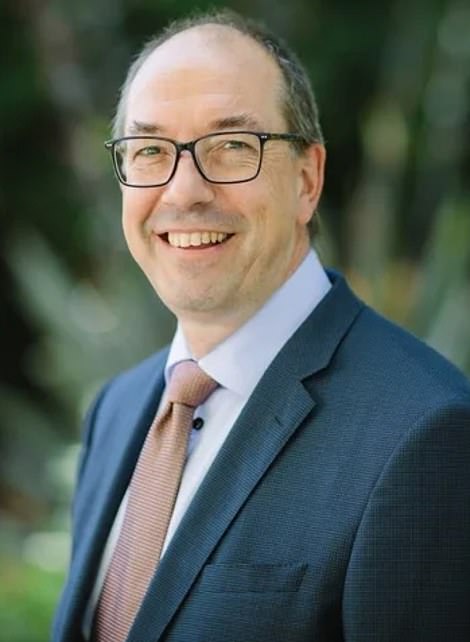 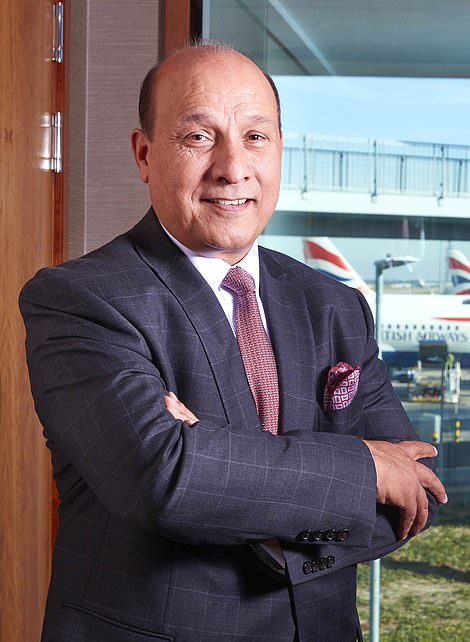 Tim Rumney (left), the chief executive of Best Western Hotels in Great Britain, said the support ‘doesn’t go far enough’, while Surinder Arora (right), founder and chairman of the Arora Group, has also been left unimpressed by the package 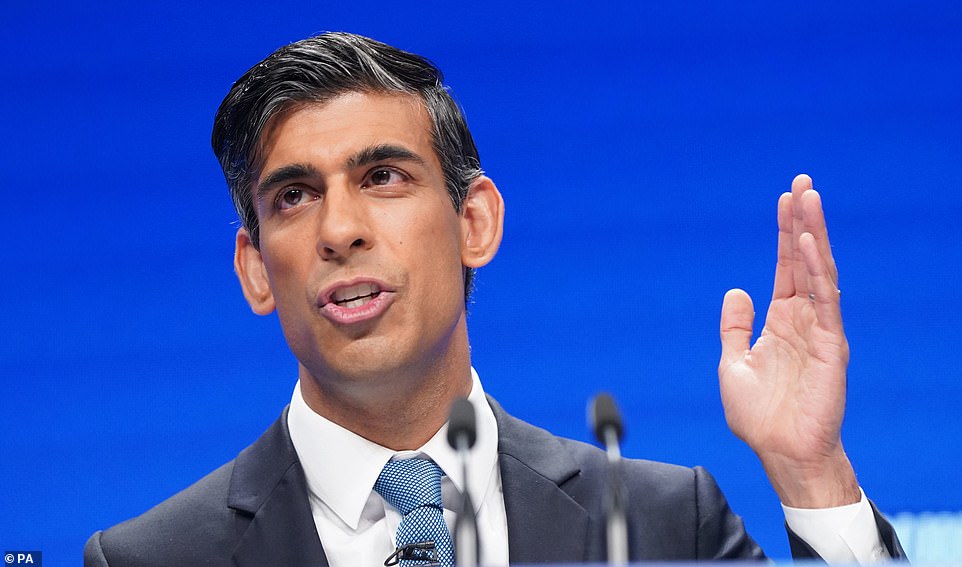 ‘The support is always welcome but it just doesn’t go far enough to help us with the problems that we’re going through at the moment with the cancellations and the impact on the finances of hotels and hospitality.

‘What we would like to see is a reintroduction of the support package that was available during lockdown, so reinstatement of furlough, a commitment to extending the VAT relief beyond April 1, preferably reducing it down to 5 per cent which he saw initially, and a suspension of business rates.

What financial support is now available for firms?

The Treasury has announced £1 billion of financial support for hospitality and leisure firms affected by the spread of the Omicron variant of Covid-19 in recent weeks. Here is what support is available for firms:

The Treasury has allotted £683 million of funding for targeted grants for hospitality and leisure businesses in England.

Businesses will be eligible for one-off grants of up to £6,000 per premises, the Government said.

There will also be £102 million of funding made available for further grants, to be given by local authorities to other businesses affected by the pandemic.

This further funding is likely to made available to areas such as retailers, suppliers and landlords of affected firms.

About 200,000 businesses will be eligible for business grants which will all be administered by local authorities and will be available in the coming weeks.

The Government has said it will also cover the cost of statutory sick pay for Covid-related absences and medium-sized employers across the UK.

This will be handed out through the reintroduction of the Government’s statutory sick pay rebate scheme (SSPRS).

The scheme reimburses firms with fewer than 250 employees with up to two weeks of Covid-related sick pay per employee.

Firms will be eligible for the scheme from Tuesday and be able to make claims retrospectively from mid-January.

About £30 million of further funding will also be made available through the Culture Recovery Fund, enabling arts and culture organisations to access funding over the winter.

– Elsewhere in the UK

The Treasury announced £150 million for the devolved administrations.

One of these is reduced business rates relief for retail, hospitality and leisure firms for the remainder of the financial year.

There will also be a 50% reduction in business rates for firms in these sectors in the 2022/23 financial year.

However, these reliefs will both have limited benefit for larger operators, with next year’s relief capped at £110,000 per business.

The Chancellor has also highlighted the rate of hospitality VAT, which at 12.5%, is lower than the 20% rate before the pandemic, although this increased from 5% in October.

Pub bosses have also said that VAT support only has a limited benefit when takings are heavily reduced, and no benefit when closures take place.

‘The problem that hotels and hospitality are having is cash flow. December is the most important month of the year for many businesses and it sees us through the first quarter of next year.

‘A £6,000 grant really goes nowhere near protecting the cash position of our members in Best Western and of the wider hospitality industry.’

Surinder Arora, founder and chairman of the Arora Group, the largest private owner/operator of hotels in the UK, has also been left unimpressed by the package which he said would not give much help to larger companies.

He told BBC Radio 4’s Today programme: ‘The Government are in a tough position in a sense, they’ve had to decide very quickly last year whether it was furlough and business rates and VAT and other things, and sadly this time I think they seem to have taken their eye off the ball, and it is very tough.

‘And I’ve heard a couple of other speakers mention ‘sticking plaster’ and other things, and it really doesn’t even go as far as that.

‘I really wish and hope the Government would look at this urgently and support businesses such as ours – not just smaller, medium sized businesses, but when you’re talking about £5,000 or £6,000 support for a business.

‘I was querying it with one of my team members last week and I was saying ‘well surely we wouldn’t be paying the full rate now when the business is on its knees’. And they said ‘no, the way the rateable value works, sadly, they look at the turnover in the business from 2015/16’.

‘Well surely that can’t be right, and this is where I think the Government really have to help not just hotels but other businesses from a business rate point of view. We thought that we might get some relief from the VAT side, because we want people coming in.

The Government also intends to use taxpayers’ cash to cover the cost of statutory sick pay for Covid-related absences for firms with fewer than 250 employees.

Cultural organisations in England can also access a further £30 million funding during the winter via the culture recovery fund, the Treasury said.

Businesses have seen takings plummet due to Christmas festivities being scaled back amid fear over the spread of Omicron.

Prime Minister Boris Johnson said of the new funding: ‘With the surge in Omicron cases, people are rightly exercising more caution as they go about their lives, which is impacting our hospitality, leisure and cultural sectors at what is typically the busiest time of the year.

‘That’s why we’re taking immediate action to help with an extra £1 billion in grants to these industries and reintroducing our Statutory Sick Pay Rebate Scheme.

‘I urge people across the country to please get boosted now to secure vital protection for yourselves, your loved ones and your communities.’

Mr Sunak added: ‘We recognise that the spread of the Omicron variant means businesses in the hospitality and leisure sectors are facing huge uncertainty, at a crucial time.

‘So we’re stepping in with £1 billion of support, including a new grant scheme, the reintroduction of the Statutory Sick Pay Rebate Scheme and further funding released through the culture recovery fund.’

The extra support builds on existing schemes in place to assist businesses, the Treasury said.

The devolved administrations will receive around £150 million of funding through the Barnett formula as part of the support announced, the department added.

The hospitality sector relies on Christmas sales for as much as a third of its yearly income and to tide it over through January and February. Critics welcomed the offer of help but argued the £6,000 grants would not be enough. 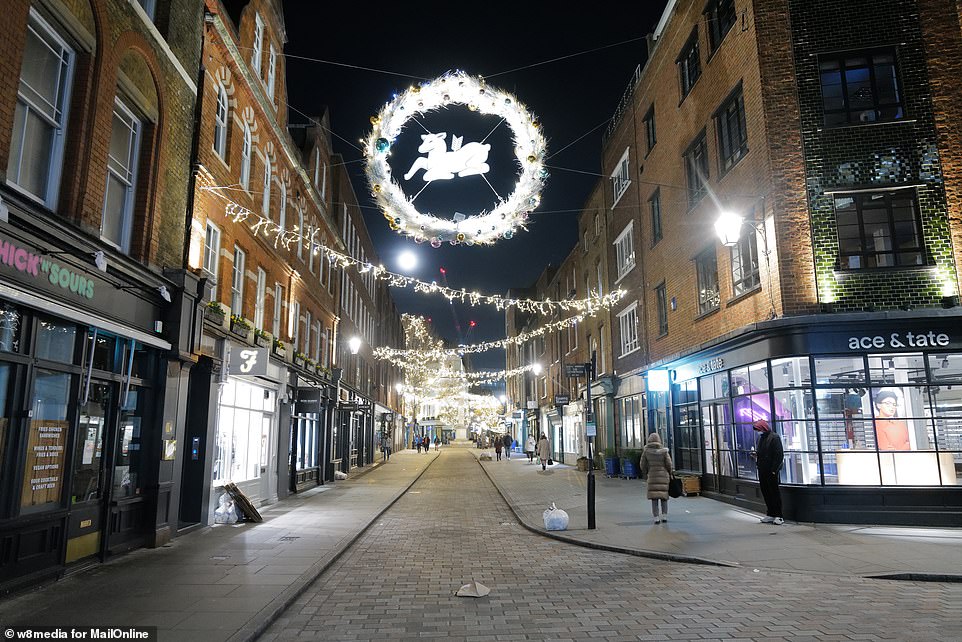 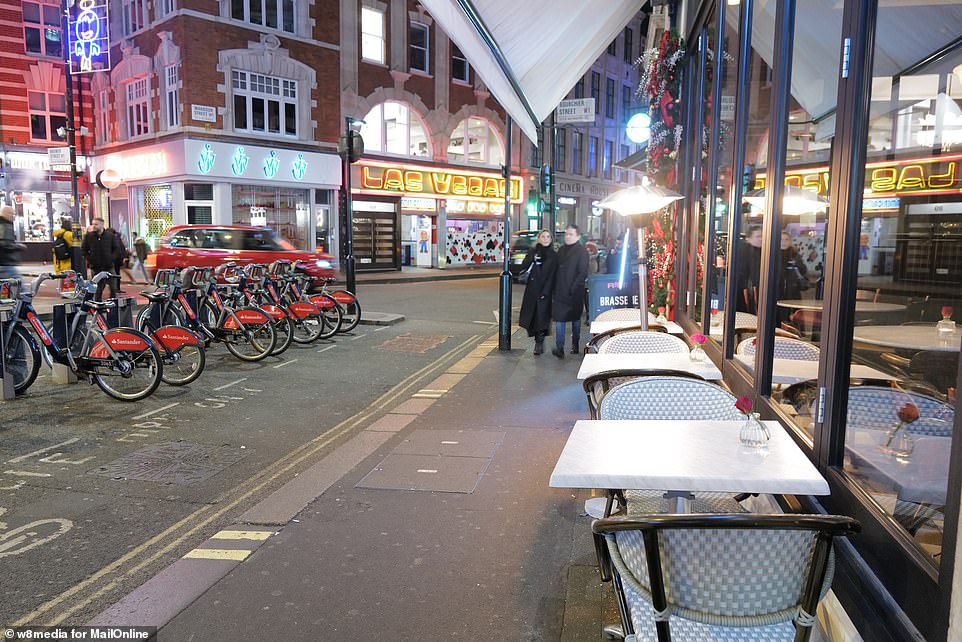 Few people walk through Wardour Street in London’s West End last night at about 9.15pm as Britons stay at home 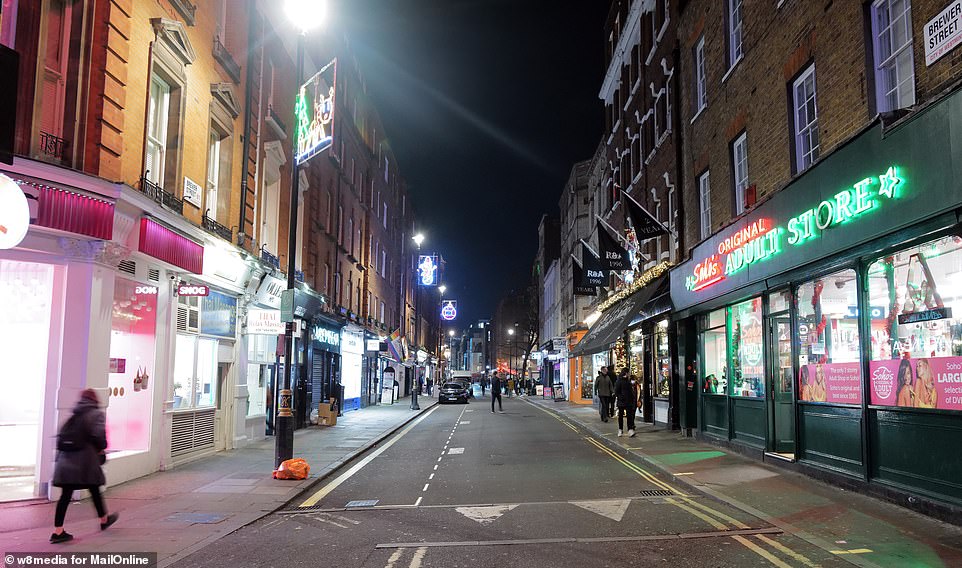 A quiet evening on Brewer Street in London’s West End yesterday evening with this photo taken at about 9.15pm 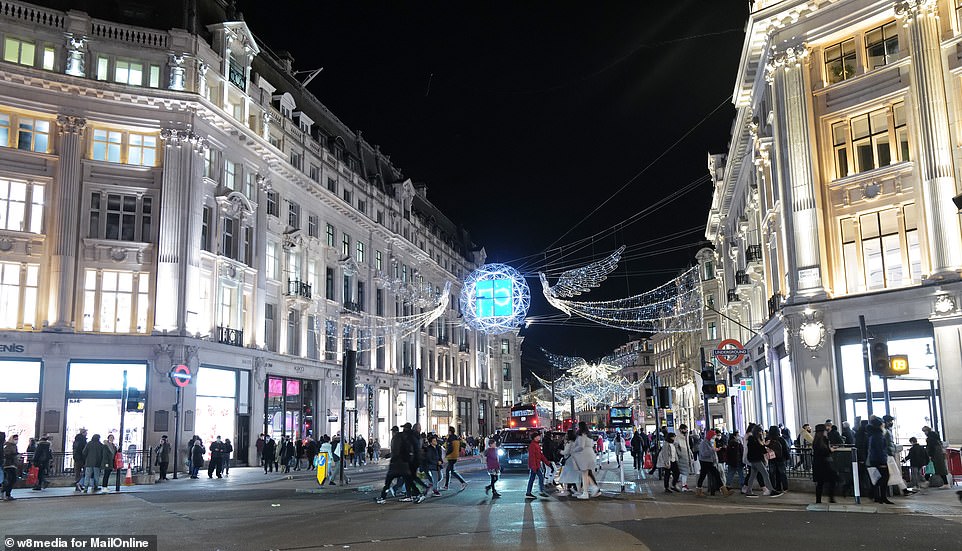 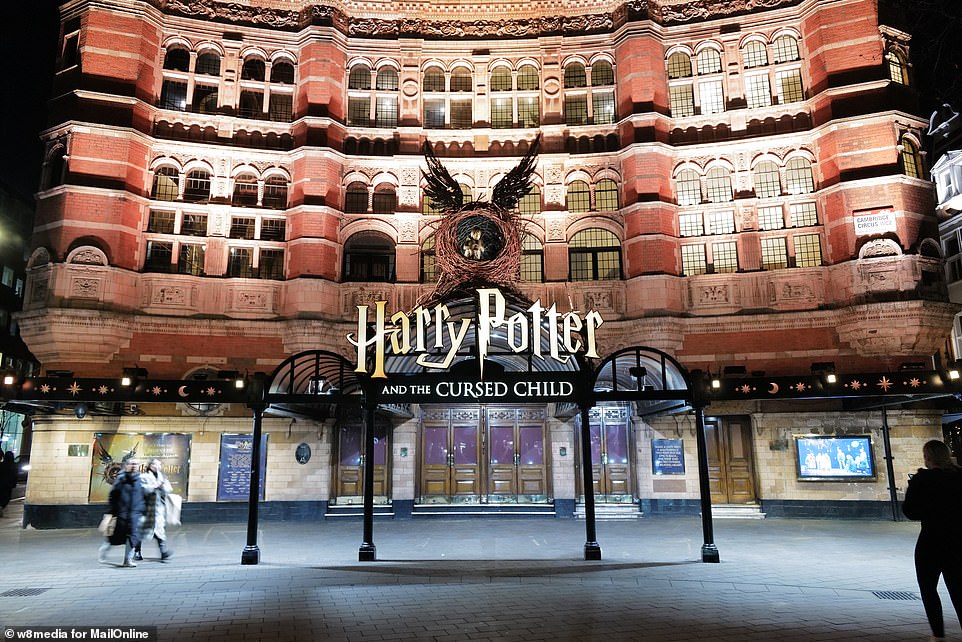 Harry Potter and the Cursed Child is one of the West End shows still running. The Palace Theatre is seen at 7.30pm last night

Jonathan Neame, boss of Britain’s oldest brewer Shepherd Neame, said: ‘We welcome the fact the Government is listening but this seems inadequate to compensate for millions of pounds of lost sales.’

Des Gunewardena, who runs the D&D restaurant chain, said £6,000 would not even cover his restaurants’ Christmas decorations.

He added: ‘Many of our larger restaurants lost £100,000-plus from cancellations last week. It’s the same again this week and heaven knows what’s going to happen to our New Year’s Eve.

‘So each of those businesses is facing £200,000-plus losses and has been offered £6,000 which doesn’t even cover the cost of our Christmas decorations.’

The Institute of Directors said the support will be ‘welcome relief’ to many businesses.

Policy director Dr Roger Barker said: ‘However, with the unwinding of a number of remaining support schemes at the end of Q1 2022, such as the VAT reduction for hospitality and business rates support, businesses also need the reassurance that these measures will now last for longer into 2022.’

Chief economist at the Confederation of British Industry Rain Newton-Smith said that any future lockdown measures must also be matched with further support.

She said: ‘The Government must monitor the situation closely and ensure that any new restrictions go in lock-step with further targeted cashflow support.’