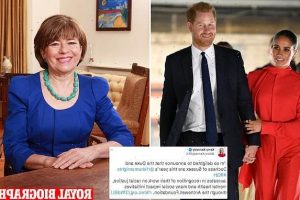 EXCLUSIVE: ‘They want to be in the spotlight at any cost!’ Royal biographer slams Harry and Meghan for accepting prestigious human rights award, and asks ‘what have they done to deserve the honor?’

A royal biographer has slammed Meghan Markle and Prince Harry for accepting a prestigious human rights award, claiming the ex-royal couple ‘want to be in the spotlight at any cost.’

Next month the Duke and Duchess of Sussex will be honored with the Ripple of Hope Award at a gala organized by the Robert F. Kennedy Human Rights Foundation.

The charity is named after former President Kennedy’s younger brother, who was assassinated in 1968 during his presidential campaign.

But royal biographer Angela Levin told DailyMail.com in an exclusive interview that she believed Harry and Meghan’s charitable credentials were ‘fantasy laced with persuasion’ and questioned: ‘Are they really up there with earlier award winners?’

‘Whichever way you look at it, their alleged achievements seem fantasy laced with persuasion and who knows what else, rather than fact,’ Levin said.

‘Meghan and Harry have found it difficult to get close to A-list celebrities. They haven’t received invitations to all the right parties so perhaps the next best thing for them was to get on award lists where A-listers abound.

‘Meghan especially is giving the impression they will stop at nothing to get to the top. She should be careful as it could all crumple.’ 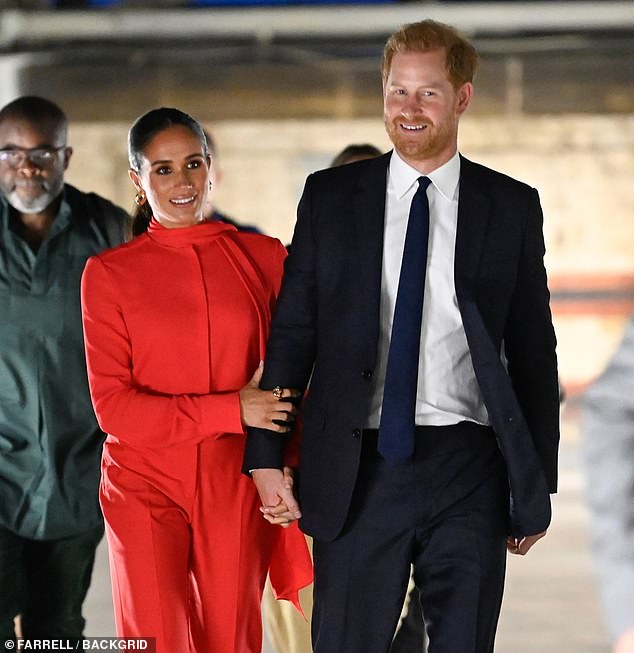 Harry and Meghan will be honored with the Ripple of Hope Award at a gala organized by the Robert F. Kennedy Human Rights Foundation on December 6 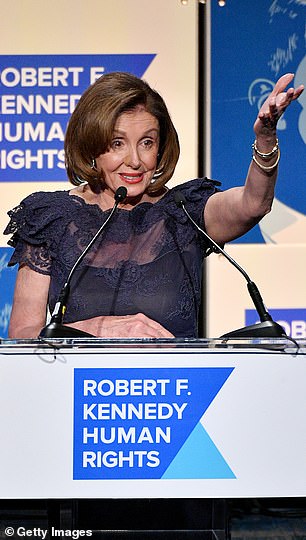 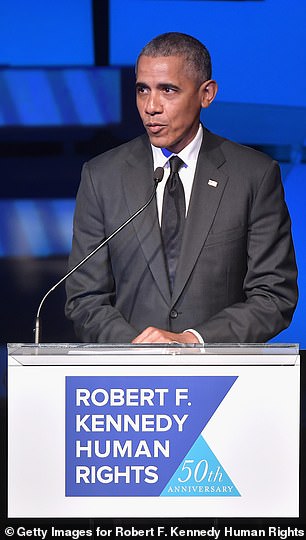 Levin’s cutting comments follow those of Kennedy’s son Robert Kennedy Jr. who also questioned the award in an interview with DailyMail.com.

Kennedy Jr. said he was ‘bewildered’ and ‘baffled’ by the decision.

And Professor David Nasaw – whose biography of Kennedy patriarch Joseph Kennedy was nominated for a Pulitzer Prize – told Yahoo News last week that it was ‘absurd’ to rank Harry and Meghan among previous recipients.

‘I find it somewhere between sublimely ridiculous and blatantly ludicrous,’ he said.

‘If you look at the people who have been awarded the Robert Kennedy prize in the past – Bill and Hillary Clinton, Nancy Pelosi, Bishop Desmond Tutu – and then you have to ask what are Harry and Meghan doing here? 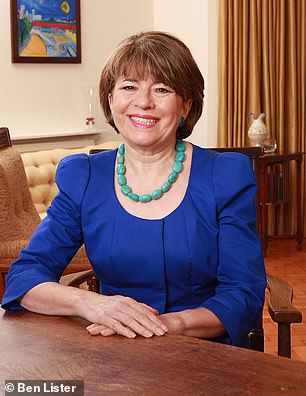 Royal biographer Angela Levin tells DailyMail.com in an exclusive interview that the couple ‘want to be in the spotlight at any cost’

‘What in God’s name have they done to merit this? What percentage of Harry and Meghan’s wealth is going to worthy causes?’

According to a press release for the human rights foundation, it chose the Sussexes for their work ‘advancing the global dialogue around mental health’, supporting Afghan refugees in the US, investing in Ukraine aid organizations, championing vaccine access and partnering with the NAACP on a ‘Digital Civil Rights Award’.

‘When The Duke and Duchess accepted our award laureate invitation back in March, we were thrilled. The couple has always stood out for their willingness to speak up and change the narrative on racial justice and mental health around the world,’ said Kerry Kennedy, 63, Bobby Kennedy’s seventh child and president of Robert F. Kennedy Human Rights.

‘They embody the type of moral courage that my father once called the ‘one essential, vital quality for those who seek to change a world that yields most painfully to change.’

Robert F. Kennedy Human Rights says it is a ‘nonpartisan, not-for-profit organization that has worked to realize the former attorney general’s dream of a more just and peaceful world since 1968.’

The Sussexes’ charity, the Archewell Foundation, was founded in 2020 but says it did not begin its work in earnest until last year.

IRS reports evidencing Harry and Meghan’s charitable work have yet to be released, more than two years after it was set up.

DailyMail.com reported in January that the charity had told the IRS it raised less than $50,000 in 2020, and spent more on legal fees to shut down its UK predecessor Sussex Royal they had launched only the year before.

No further Archewell charity filings have been published since then. 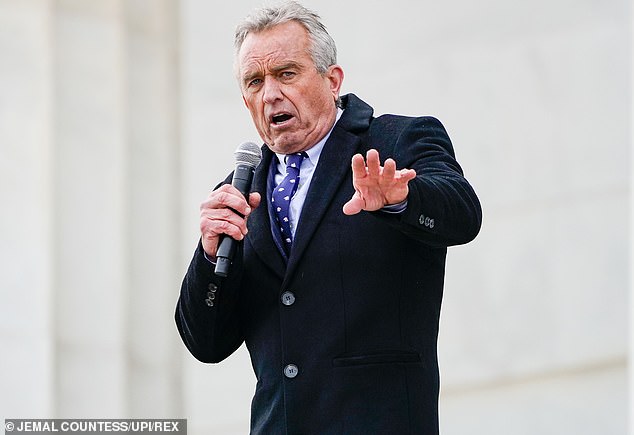 RFK Jr. has no involvement in who receives the award, which is intended for ‘exemplary leaders across government, business, advocacy’, but was surprised by this year’s choice. He told DailyMail.com Harry and Meghan are a ‘bewildering choice’ 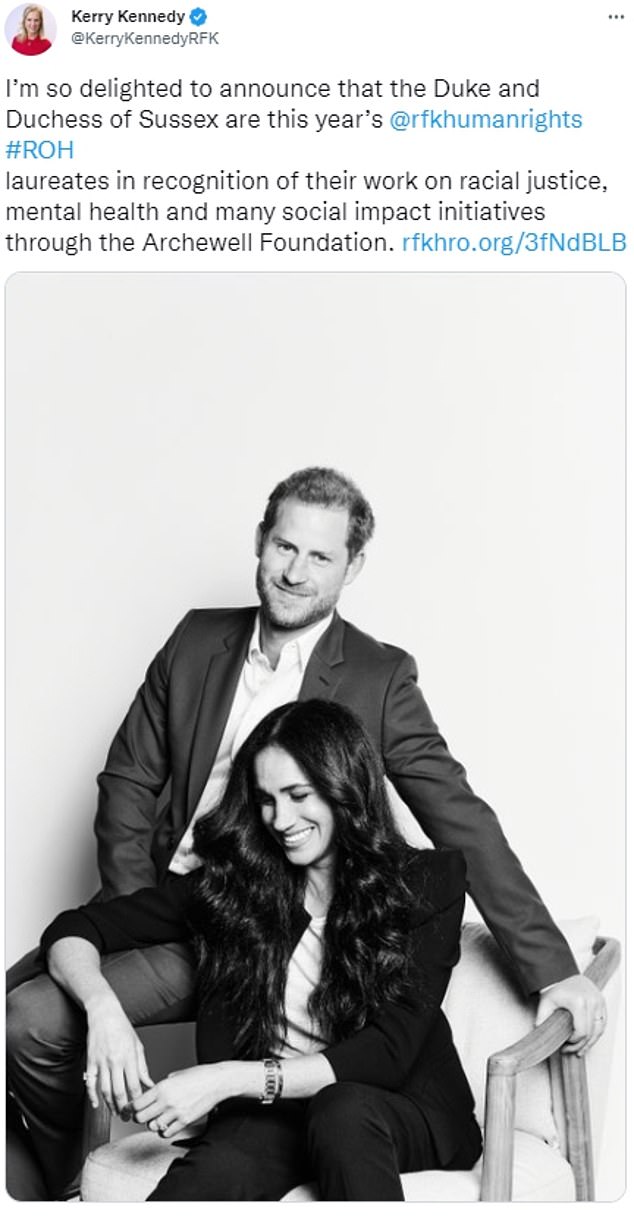 Sussex Royal was renamed MWX after the palace balked at the couple using regal branding despite relinquishing their royal roles, and then finally shuttered when the Duke and Duchess moved to the US.

It was subject to a UK Charity Commission investigation over complaints of financial mismanagement. The philanthropy watchdog concluded no rules or laws had been broken, but admonished the couple for wasting money on red tape.

‘A substantial proportion of funds went into setting up and then winding up a charity that was active for a relatively short period of time,’ Helen Earner, the commission’s director of regulatory services, said in a statement.

‘Trustees cannot predict future events when establishing a new charity –circumstances can change after a charity has been set up. But all trustees, before setting up a charity, should think about the longer term, and consider carefully whether a new charity is the best way of achieving the intended aims.’

The couple have also been busy setting up a network of 11 companies, all based in the opaque tax haven of Delaware.

Names for the companies include an intriguing Japanese term for deal making, a reference to Meghan’s freckles in Spanish, a South American river, and a possible allusion to a $44,000 ‘babymoon’ getaway the couple took in 2019.

The firms are likely used for their book and media deals, as well as to file and hold their Archewell trademarks.

RFK Human Rights will give Archewell their gong at its Ripple of Hope Award Gala in New York City on December 6. 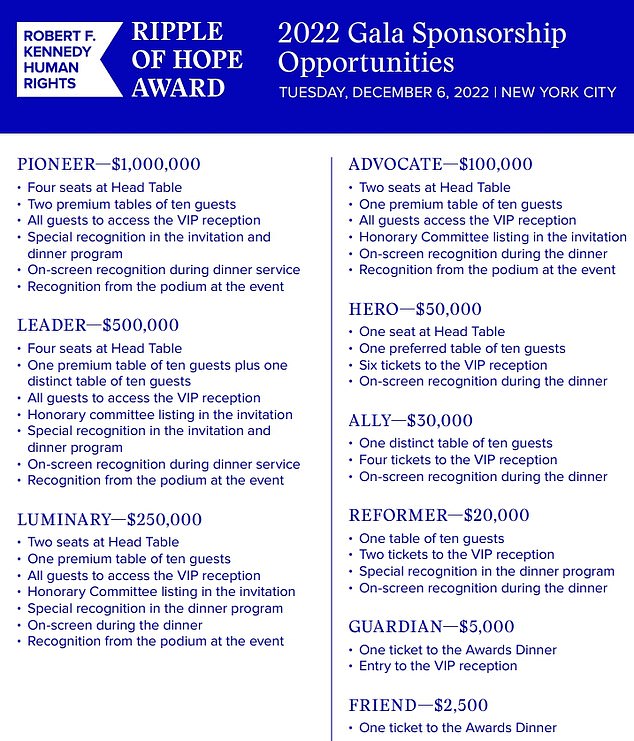 Tickets on the top table, where the couple will be sat, are being sold for up in packages worth up to $1million. The most expensive package – ‘the pioneer’ deal – buys four seats at the ‘head table’, two tables, VIP access and repeated recognition both on the program and at the event. The cheapest option is a one-plate ticket for a whopping $2,500

The ex-royals will be honored alongside Ukrainian President Volodymyr Zelensky, Bank of America CEO Brian Moynihan, and Siris Capital Group co-founder Frank Baker, who is a member of the RFK Human Rights foundation board.

Biographer Levin said she was unsure the former royals could measure up to ex-presidents or philanthropy legend Bono.

‘Are they really up there with earlier award winners like Barack Obama, George Clooney and Desmond Tutu? Or are they just a couple who want to be in the spotlight at any cost?’ she asked.

Levin wrote a biography of Prince Harry in 2018. Her biography, Camilla: From Outcast to Queen Consort, has just been published in the UK and will be appearing in American book stores early next year.