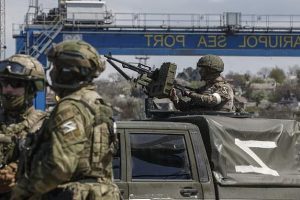 Russia has been ‘forced to merge depleted units into new battalions in Ukraine after up to 25,000 soldiers were killed in failed advance on Kiev’, UK says

Russia has been forced to merge and redeploy depleted and disparate units from failed advances in northeast Ukraine, a British military update said on Saturday.

‘Russia hopes to rectify issues that have previously constrained its invasion by geographically concentrating combat power, shortening supply lines and simplifying command and control,’ it said. 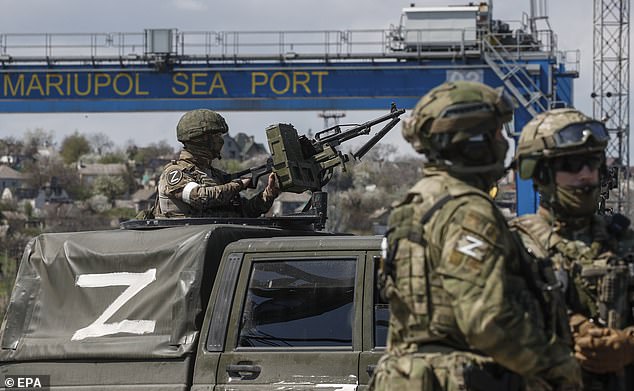 A picture taken during a visit to Mariupol organized by the Russian military shows Russian servicemen guard the territory of the cargo sea port in Mariupol. Russia has been forced to merge and redeploy depleted and disparate units from failed advances in northeast Ukraine 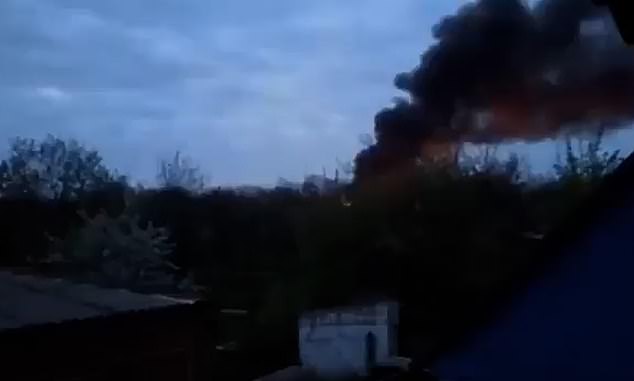 The news comes as Russia is reported to have sustained colossal losses in the war in the east, although Ukraine too has admitted to suffering many casualties.

Ukraine continues to carry out attacks behind Russian lines to cut off vital supply routes, with a fuel dump in the Donetsk region catching fire today.

Kyiv has not acknowledged carrying out any of the attacks – which have also hit railway bridges and ammo dumps – but is widely thought to be orchestrating them.

Russia is pouring troops into the battle in Donbass in an effort to force a bloody victory having been defeated in its initial aim to storm in Kyiv, topple the government, and install a puppet regime loyal to Moscow.

After it became apparent they did not have sufficient force to take the capital, Russia’s generals yanked their units out, patched them up as best they could, and then threw them back into the fight in Donbas. 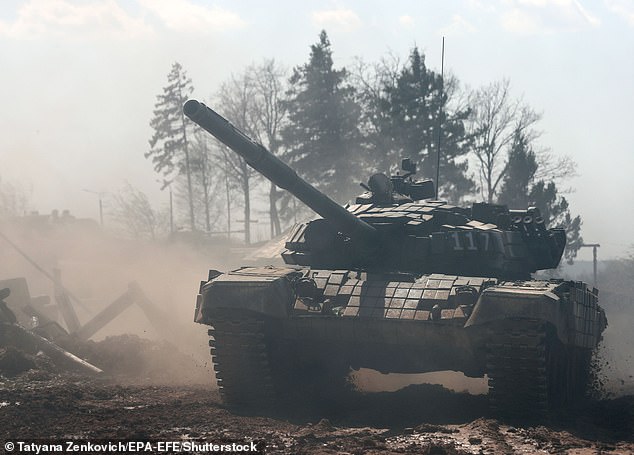 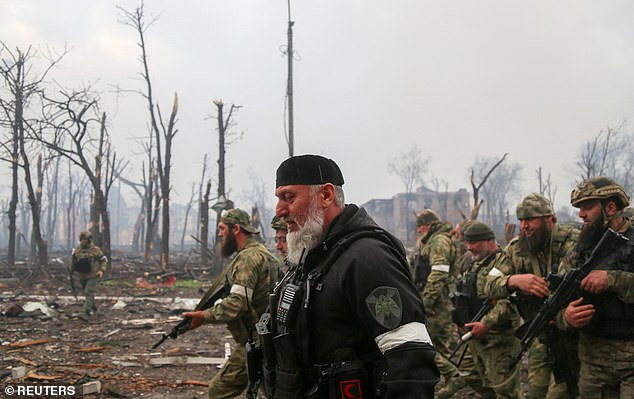 Fighters of the Chechen special forces unit, led by Russia’s State Duma member Adam Delimkhanov, walk near the administration building of Azovstal Iron and Steel Works. Russia has not yet taken the military base due to the heavy casualties involved in the fighting

They also adapted their tactics – abandoning precision missile strikes and rapid advances which saw them mauled around Kyiv in favour of slow advances behind walls of blanket artillery in similar tactics to WW1 trench warfare.

The move has met with mixed success. Ukraine has acknowledged losing control of some towns and villages, but has made gains elsewhere in counter-attacks.

Supplies of heavier weapons including tanks, artillery cannons, precision munitions and anti-aircraft weapons are designed to help with those attacks while ensuring the Ukrainians can destroy as much Russian equipment as possible in the process.

Oleksiy Arestovych, a Ukrainian secret service veteran-turned presidential adviser, acknowledged his military is suffering ‘serious losses’ on battlefields in the east but insisted that Russia’s casualties are ‘much, much worse’.