Russian thugs caught on CCTV shooting unarmed pensioner in the back 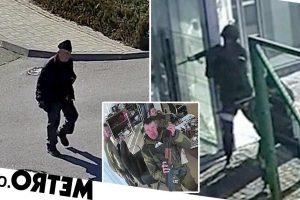 Sickening video footage of Russian soldiers shooting unarmed civilians in the back has come to light.

CCTV cameras captured the moment two men were sprayed with bullets as they walked away from invading troops near Kyiv.

The fighters are seen piling out of a stolen van daubed with the V sign, used by Russian forces, before approaching the gate of a factory.

One of the guards, Leonid Pliats, walks towards them alongside his boss with his arms raised to show he is not carrying a weapon.

The men seem calm in the footage, which was obtained by the BBC, and even seem to be smoking cigarettes.

All begin to walk away but two soldiers quickly return, taking aim at the unsuspecting men and shooting them multiple times in the back with rifles.

One was killed instantly but Mr Pliats, 65, managed to get to his feet and make it back to the building where he called a friend for help.

Vasyl Podlevskyi spoke to the dying man on the phone and contacted volunteer Ukrainian soldiers, begging them to get to his wounded friend. 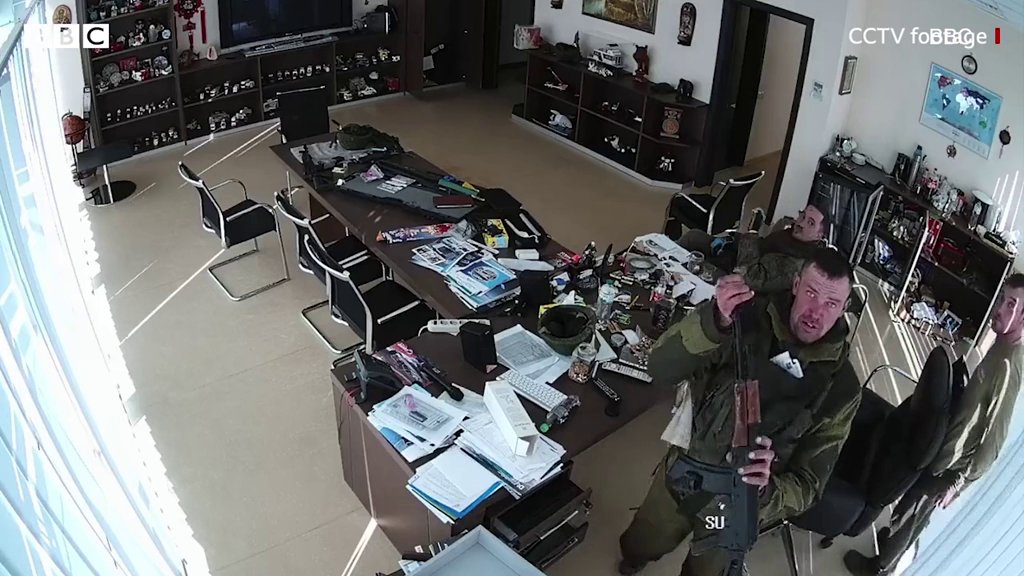 He told the broadcaster: ‘I said can you at least bandage yourself up? And he told me, Vasya, I barely crawled here. Everything hurts so much. I feel really bad.’

Two former air conditioning salesmen who took up arms when tanks rolled over the border made it to the factory where he lay dying but had to wait for backup.

In the meantime, security cameras around the building captured the murdering soldiers looting the building, even drinking whisky in the bosses’ office.

The BBC has handed the footage and analysis to the Ukrainian prosecutor’s office, which is now investigating the killing as one of more than 10,000 possible war crimes they have registered.

His daughter, Yulia Androshchuk, told the BBC she had been unable to return to Ukraine to give him a proper funeral.

She said: ‘I’m not so much furious as full of grief – and fear. These damn Russians are so out of control, I’m afraid of what they might do next.’

Ukraine has accused Russian forces of carrying out countless war crimes since the attack began on February 24.

Evidence began to come to light after its army took back land previously held by Russian soldiers around the capital.

‘Thousands and thousands of victims. Hundreds of cases of brutal torture. Human corpses are still found in manholes and basements. Tied up, mutilated bodies.

‘Hundreds of cases of rape have been recorded, including underage girls, very young children… And even a baby! It’s just scary to talk about it now.’