Soldiers moan about lack of plant-based options in Armed Forces 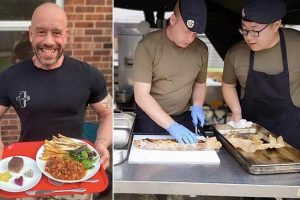 Soldiers are complaining about a lack of vegan options for meals – and even uniforms – in the Armed Forces, a charity has claimed.

Plant-based servicemen and women claim they are having to purchase their own ‘vegan leather’ Doc Marten boots because they refuse to wear the commissioned cow-hide clobber.

Some troops complained about having to opt for vegetarianism because cutting out all animal products while serving was ‘too hard’. 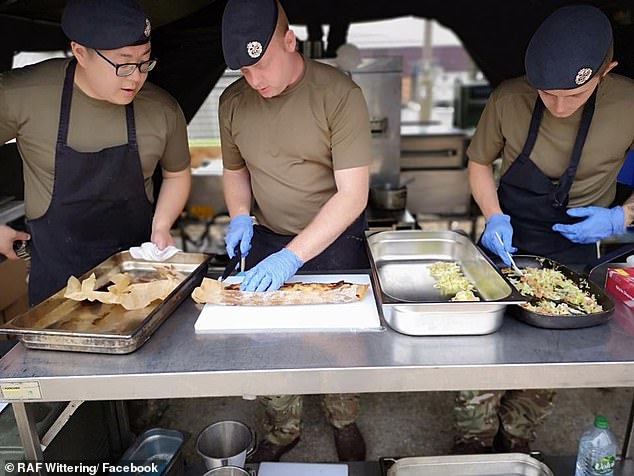 The Vegan Society have claimed soldiers are complaining about a lack of vegan options for meals – and even uniforms – in the Armed Forces. Pictured: Chefs at Royal Air Force Wittering

The Vegan Society  – which once called on bosses to provide workers with their own vegan shelf – said they have ‘dealt first-hand’ with complaints from vegans serving across the Army and the RAF.

The soldiers and airmen want more options to follow a plant-based diet and lifestyle, the society claims.

There was an estimated 600,000 vegans in the UK in 2019, but the charity says this number continues to grow, including in the Armed Forces.

But Damon Knight, a serving officer in the Royal Navy, explained: ‘Key is the supply line.

‘You would have a much better chance of being a vegan in the Royal Navy or Royal Fleet Auxiliary than the Army or Royal Marines.

‘The Royal Air Force would depend on your trade group, some rarely deploy, others are much the same as the Army.

‘In extremes you would have to suspend your vegan beliefs for periods when the catering system cannot support them.’ 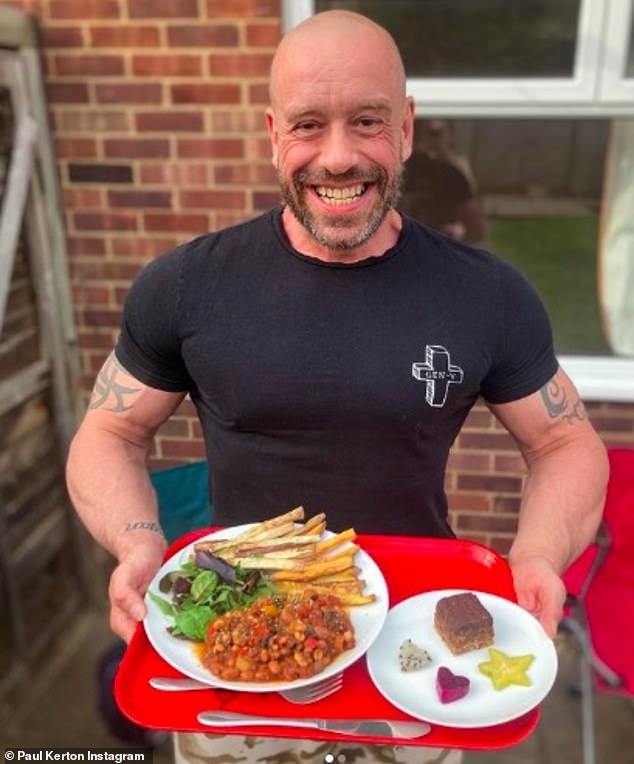 Paul Kerton, a vegan bodybuilder who knows members of the Forces said: ‘It can potentially be more difficult when on manoeuvres so it does sound as though more needs to be done, at least in some circumstances’

A Vegan Society spokesperson said: ‘Vegans in the UK, whether they serve in the British Forces or not, have the protection of human rights and equality law.

The world’s oldest charity for vegans: The Vegan Society

Set up in 1944, The Vegan Society has helped promote veganism across Britain while also informing people of its benefits and beliefs.

The group strives to end ‘exploitation of animal life by man’, and does so by promoting an alternative diet, while also lobbying politicians to adopt its message.

In 2018 it released a booklet for vegan criminals and for prison staff so they can ensure those who want to lead an animal-free life can continue to do so even when locked up.

At the time, the charity said British vegans are ‘protected under human rights and equality law’.

They argued that prisons have an obligation to ensure they ‘don’t interfere with a vegan’s right to freedom of conscience’.

‘And it is vital that employers understand that they are under a statutory duty to examine how their policies and practices might have a negative impact on vegan employees.

‘They must do everything they can to remove any observed disadvantages faced by vegans. The Vegan Society has heard first-hand from those serving in the Army and RAF who have struggled.

‘Not only when it comes to the food on offer but also with uniforms, with some having to buy suitable vegan footwear at their own expense.

‘These barriers not only make it more difficult for those already following a vegan lifestyle but also have the potential to put off those in the British Forces that are keen to give veganism a go, particularly at a time when so many are interested in going vegan for animal, health or environmental issues.

‘The Vegan Society would absolutely welcome any kind of positive change that make veganism more accessible in these areas.’

It is understood that while the Forces do cater for vegans, those on the frontline are faced with much less options than those who follow Halal, Kosher and vegetarian diets.

The problem is said to be more prevalent in the RAF and Army, whereas the Royal Navy successfully trialled a new range of vegan meals that could be served at sea in 2019.

Pro-vegan Jo Foster, who claimed to have inside knowledge of the Marines, said one Royal Marines training exercise ends with the slaughter and eating of a live rabbit or chicken.

Jo said: ‘Refusal would not go down well. The chicken [or] rabbit bit happens at the end of a long period in the field where you’ve had sod all sleep and sod all food.

‘This animal will be the first bit of substantial food you’ve had in quite a while so while not obliged to eat it, there’s not going to be much else around to eat.’

And Paul Kerton, a vegan bodybuilder who knows members of the Forces said: ‘I’ve spoken to quite a few service people and the general consensus that I’m hearing is that they are usually well catered for.’

He added: ‘But…it can potentially be more difficult when on manoeuvres so it does sound as though more needs to be done, at least in some circumstances.’