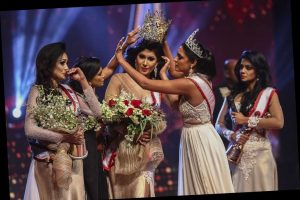 A Sri Lankan beauty queen who caused a pageant brawl over the crown has been arrested over the on-stage altercation, police said Thursday.

Reigning “Mrs. World” Caroline Jurie was arrested on charges of “simple hurt and criminal cause” in connection to the chaos Sunday night at a pageant in Colombo, the BBC reported.

Jurie, who is from Sri Lanka, started the ruckus when she jumped on stage as they crowned the new “Mrs. Sri Lanka” winner Pushpika De Silva, the outlet reported.

She snatched the crown off De Silva’s head, claiming she was actually divorced and thus disqualified from holding the title.

“There is a rule that prevents women who have already been married and are divorced, so I am taking steps to make the crown go to second place,” Jurie told the crowd.

Jurie put the crown instead on the runner-up, prompting tears and fracas on stage.

De Silva had to be hospitalized to be treated for head injuries after the debacle, the BBC reported.

She later told reporters that she would pursue legal action for the “unreasonable and insulting” way she was treated, the BBC reported.

Police confirmed Thursday that they arrested Jurie and another competitor in connection to the brawl.

Pageant organizers have re-crowned De Silva and apologized for the incident.

“We are disappointed. It was a disgrace how Caroline Jurie behaved on the stage and the Mrs World organization has already begun an investigation on the matter,” the event organizers told the outlet.