‘The princess wins again’: McLachlan referred to female colleague as ‘Lucifer’ in email

Actor Craig McLachlan has told a court he remained friends with colleague Christie Whelan Browne despite referring to her as “Lucifer” in an email and telling their boss she was selfish, delusional, disrespectful and nasty.

McLachlan, 56, was starring in the 2014 stage production of The Rocky Horror Show with Whelan Browne, who had the lead role of Janet, when she took leave because of an injured back. 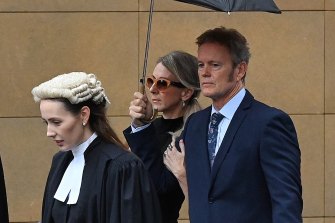 In an email to the show’s director Christopher Luscombe in June, McLachlan said he had just performed with Whelan Browne’s understudy and was “quietly, privately celebrating” that the “perpetually problematic” Whelan Browne was going to be “sent packing”.

“I’m then informed after said performance that Lucifer is being given another chance next week. Really???? Omg!” McLachlan wrote.

“The princess wins again, and we all continue to march to the beat of her selfish, delusional, disrespectful and frankly nasty drum … I rue the day I didn’t push the button on her removal at the outset.”

The emails were read out as part of the defamation case McLachlan brought against Whelan Browne, the ABC and the Sydney Morning Herald after an investigation was published in 2018 alleging he harassed three female cast members during the 2014 season of the production.

McLachlan has denied the claims. The media organisations are arguing the defences of truth and contextual truth, with 11 women including Whelan Browne expected to give evidence in the NSW Supreme Court that they were harassed by McLachlan in Rocky Horror and other productions.

On Friday, the media organisations’ barrister Michael Hodge, QC, asked McLachlan if “Lucifer” in the email was a reference to Whelan Browne.

“Yes it is,” McLachlan said.

“You do not call a friend Lucifer, do you agree with that?” Hodge said.

“Friends call each other all sorts of things, Mr Hodge, particularly during difficult times,” McLachlan said.

As his cross-examination continued, McLachlan was played several videos from a Channel 7 documentary he participated in last year, in which he re-enacted an allegation made against him by actress Angela Scundi.

Scundi is expected to give evidence that McLachlan kissed her while they were on-stage and stuck his tongue in her mouth, and when she confronted him backstage he furiously stuck his finger in her face and said he would end her.

In the Channel 7 vision, McLachlan and his wife Vanessa Scammell briefly pecked on the lips as McLachlan explained that the scene would not allow him to passionately kiss a colleague.

“I wouldn’t jeopardise the work,” McLachlan said in the vision. “Some people will hate me for saying this, I’m the star of the f—ing show.”

Hodge then played McLachlan a recording of the actual stage scene, which showed the kiss with a different actress lingering longer than the kiss with his wife.

“It’s not a momentary peck, is it?” Hodge said.

When the video was played again, McLachlan conceded that the kiss he demonstrated in the reconstruction with his wife was different to what was shown in the video of the performance.

Hodge suggested that what McLachlan did was lift the face of Ms Scundi during one performance “and, to use your word, pash her, and put your tongue in her mouth”.

“No, that’s not right,” McLachlan said.

He denied that there was a confrontation after the song where he became aggressive and enraged and leaned over Scundi, putting his finger in her face.

“You said to her ‘you are nothing, don’t ever speak to me like that again, I will end you’,” Hodge said.

“I certainly did not,” McLachlan said.

Hodge suggested that McLachlan made up a false story about the length of the kiss to cover up the behaviour he engaged in, which he knew was wrong.