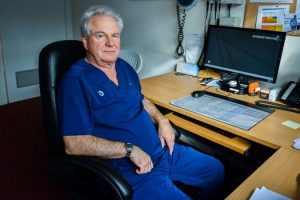 Thousands of Victorians have rushed to get their coronavirus vaccines as a growing cluster of cases threatens to plunge Melburnians into lockdown again.

Concern that the outbreak in Melbourne’s north, which has spread to 15 people, has already outrun health authorities has also prompted a top infectious diseases expert to call on Australia’s immunisation advisory group to consider shortening the gap between AstraZeneca doses, to ensure people are fully protected from COVID-19 variants quicker. 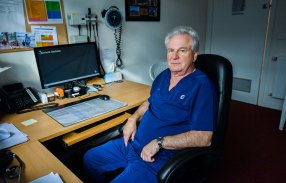 The Australian Technical Advisory Group on Immunisation recommends three months between doses to maximise protection from the virus, but the University of Sydney’s Professor Robert Booy said this should be reduced to two months.

”Serious consideration should be made to bring the second dose forward,” he said. “AstraZeneca against the Indian variant may be only 33 per cent effective after only one dose. Second-dose protection is much higher, 60 per cent plus, and that’s just for infection. For severe disease it’s likely to be 90-plus.”

To protect people against the outbreak in Victoria, Professor Booy said heath authorities should also consider “ring fencing” those at risk by encouraging close contacts or possible close contacts to get vaccinated no matter their age or vaccination category. 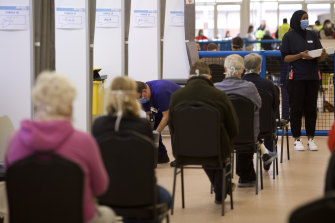 People wait for a jab at the Melbourne Showgrounds vaccination hub on Wednesday.Credit:Eddie Jim

Victorian Health Department figures show the number of people receiving vaccines via state government-run centres almost doubled on Tuesday to more than 15,000. A similar number of doses were administered by the federal government in Victoria on Tuesday, via GP clinics and in the aged care and disability sectors.

General practitioner John Hodgson runs a respiratory and vaccine clinic in Coolaroo in Melbourne’s north, near where health authorities are grappling to contain the outbreak. He has extended his medical practice’s opening hours as hundreds have rushed to be swabbed or immunised.

“It has been absolutely flat chat,” Dr Hodgson said on Wednesday.

After weeks of observing high vaccine hesitancy and very low uptake, which left hundreds of doses of unused AstraZeneca in the fridge, the Coolaroo Clinic was now vaccinating more than 20 people an hour.

Ines Rio, chair of the North Western Melbourne public health network – which oversees medical services in northern suburbs on the fringe of the outbreak such as Craigieburn, Campbellfield and Preston – said there had been a “drastic surge” in people aged under 50 requesting the AstraZeneca vaccine.

“They are saying now that they don’t want to wait months for the Pfizer vaccine,” she said. “The balance of risk has changed and they are saying, ‘I’ll have an AstraZeneca if Pfizer is not available for me.’ ”

This trend was also observed at the Melbourne Showgrounds mass vaccination hub, which administered a record 850 jabs in a day. Western Health nurse unit manger Allison Lamb, who is overseeing the showgrounds centre, said an increasing number of those attending were younger Victorians.

Epping general practitioner Dominic Barbaro said dozens of his patients who had previously opted to defer their AstraZeneca jabs in the hope they could secure the Pfizer vaccine later in the year were now calling begging to be booked in for AstraZeneca shots. 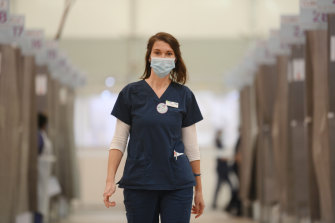 The clinic administered 60 doses of the vaccine on Tuesday and received another 150 shots of AstraZeneca on Wednesday morning as bookings soared.

“We are struggling to keep up with the demand of people calling and wanting their vaccine,” the veteran GP said.

Dr Barbaro, who is in his 70s and has been immunised with AstraZeneca, said he had observed rising rates of vaccine hesitancy in his patients, particularly among elderly migrants left anxious by “confusing and inconsistent messaging” around the very rare clotting condition linked to the vaccine.

“I am quite blunt with them, I say, ‘Pfizer might be available at the end of the year, but it’s not much good if you’re dead before then,’ ” Dr Barbaro said.

“This might sound harsh, but it’s the reality of what we are facing. The risk of not being vaccinated is far greater for them if they were infected with COVID-19.”

Melburnians who hoped to get vaccinated after work on Wednesday were left disappointed after being turned away from the hub at the Royal Exhibition Building, which closed at 4.30pm.

Out in Epping in Melbourne’s north, where the first of the COVID-19 exposure sites cropped up this week, a queue snaked out the door for testing at the Epping Community Centre on Wednesday afternoon, while a handful of people calmly waited for their vaccine at the Northern Hospital.

Uber drive Akash Pathak, 27, is in the vaccine priority group due to his work and tried to get a walk-in appointment at the Northern. 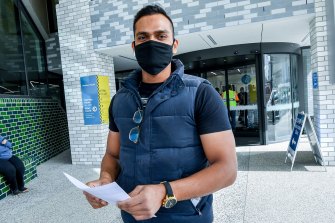 Akash Pathak was turned away from the Northern Hospital in Epping as he did not have a vaccine appointment.Credit:Joe Armao

He said he tried several times to get through on the vaccination hotline, but after waiting up to 90 minutes on the phone he became so frustrated he went straight to the hospital.

But Mr Pathak said he was turned away and given a direct number to ring to make an appointment. He said the outbreak was a factor in his decision to seek vaccination, but it was more about not being a risk to his passengers or his family.

“I don’t to carry it to my family and I’m in a hotspot in Thomastown,” Mr Pathak said.

To cope with the surge in demand for vaccinations in Victoria, an extra 130,000 AstraZeneca doses will be allocated to the state over the next six weeks.

The federal government has offered an additional 40,000 doses this week, and 15,000 further doses per week for the next six weeks.