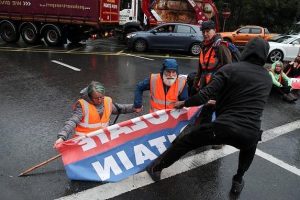 Motorist bodies yesterday called for the police to take more robust action against the eco-group as it blocked three motorways around London.

The cumbersome response to the activists has caused a simmering row between the Home Office and Department for Transport, which is leading the legal action.

Members of the group have so far ignored an injunction that was granted last month, aimed at preventing demonstrations on the M25.

They once again targeted the motorway yesterday on the group’s tenth day of protests in three weeks, while also grinding traffic to a halt on the M4 close to Heathrow and the M1.

Videos showed one irate driver grabbing banners from those sat on the road before ripping them up. 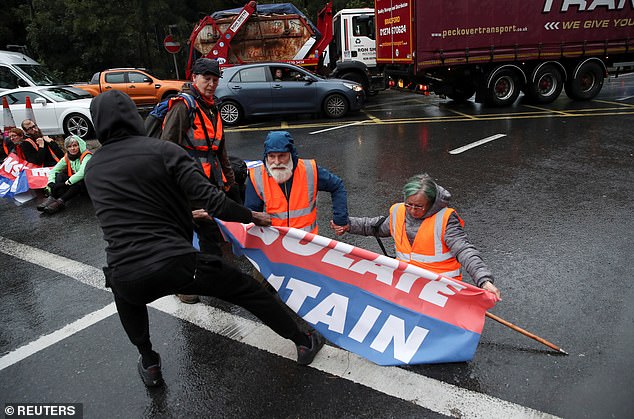 Insulate Britain said that eight protesters had been released from police custody after taking part in a demonstration only a day earlier, while other participants had been let go earlier in the week.

National Highways, the body responsible for managing the country’s roads, was yesterday drawing up injunctions covering the M4 and M1 which were hoped to be in force by the end of the day.

Ministers had earlier promised that an interim injunction covering the M25 would significantly hinder the group’s ability to stage protests.

Despite being granted on September 22, the legal measure has failed to stop the group, with some able to take part in repeat demonstrations.

Officials yesterday admitted that the first papers were served on activists on Wednesday, with court hearings unlikely for several weeks.

The protesters could be found in contempt of court, which carries a maximum penalty of two years in prison or an unlimited fine. Ministers have now given orders to seek sweeping new legal moves in the form of a ‘contra mundum injunction’, which will apply to anyone who breaches its terms by blocking roads, rather than against named Insulate Britain activists.

But there is uncertainty about whether such a move would be seen as too draconian and if such powers would be granted by a judge. 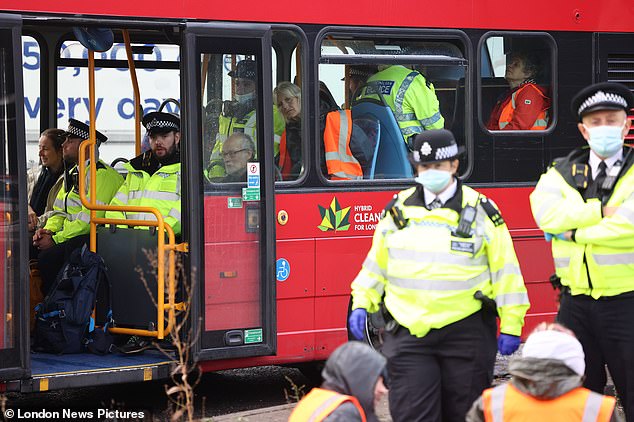 Activists on the M1 in North London are arrested and put on a bus commandeered by police, which was stuck Friday morning

Priti Patel has also instructed police chiefs to look at charging protesters with road traffic offences such as ‘causing danger to road users’ that could see them imprisoned for up to seven years.

Hugh Bladon, founding member of the Alliance of British Drivers, said: ‘What we need now is firm action from the police before someone gets killed.’

A total of 39 activists were arrested for taking part in the three rush-hour protests yesterday.

The M1 protest was cleared by 10am with 17 people arrested, some of whom were detained on a bus that had been commandeered by police.

Insulate Britain yesterday pledged to continue its action until the Government ‘indicates that they will insulate all of Britain’s 29million leaky homes by 2030’.

A Government spokesman said it was already ‘serving papers to offenders who will be sent to court and could face fines or prison’.