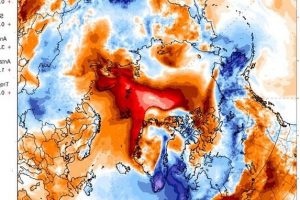 Britain to bask in ‘early summer’ caused by heatwave in ARCTIC: UK set for glorious 14C today with week-long sun and high record 20C on Wednesday

Britain is set to enjoy blue skies today on the ‘hottest day of the year’ so far, with forecasters promising a ‘cracking day if you like spring sunshine’.

The UK experienced its hottest day of 2022 so far yesterday, as temperatures rocketed to 17C in the West Sussex village of Wiggonholt and 16C in Gogerddan in Cardiganshire, Wales.

But the Met Office has said mercury levels are expected to rise again today to 20C in some areas – surpassing the temperature in the Spanish cities of Seville and Madrid – while the barmy weather is expected to continue in London for the rest of the week.

Scientists have suggested that Britain’s ‘early summer’ could be caused by a ‘completely unprecedented’ heatwave in the Arctic, where unbelievable temperatures nearly 30C above normal visited the North Pole on Wednesday.

Ruth Mottram, a climate scientist with the Danish Meteorological Institute, said: ‘In general we expect to see more and more of these [warming] events in the future.’

Meanwhile in the Antarctic, the temperature in Vostok – a Russian meteorological observatory at the centre of the eastern ice sheet famous for holding the lowest temperature ever observed on Earth – leaped from its average high of -53C to -17C on Friday. 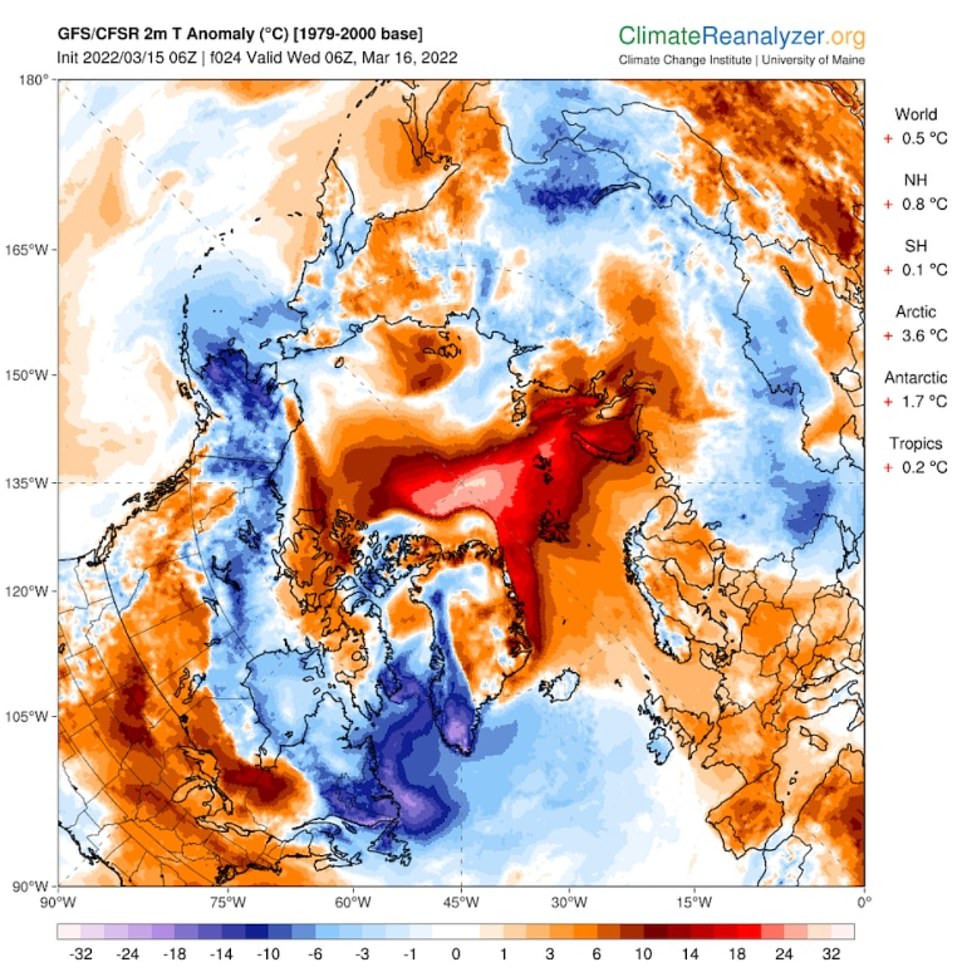 Scientists have suggested that Britain’s ‘early summer’ could be caused by a ‘completely unprecedented’ heatwave in the Arctic, where unbelievable temperatures nearly 30C above normal visited the North Pole on Wednesday 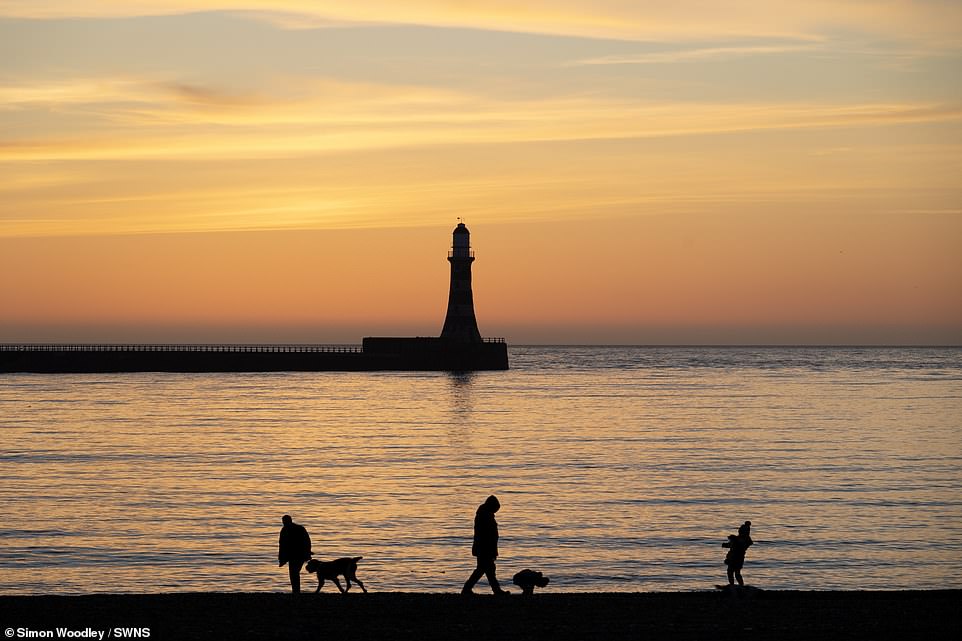 Roker in Sunderland as the walkers enjoy a great start to the day, March 19, 2022 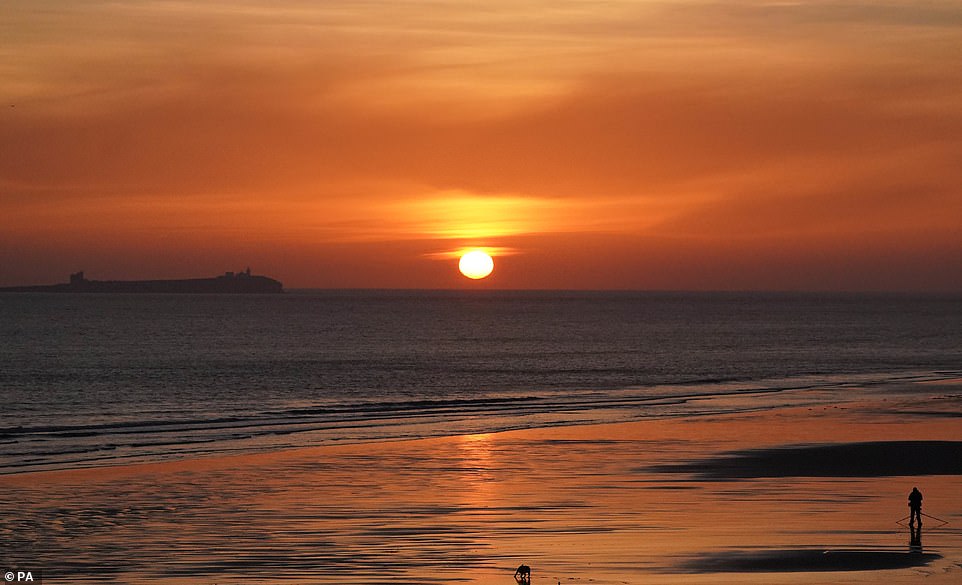 People during sunrise at Bamburgh Beach, looking out to the Farne Islands in Northumberland, March 19, 2022

Warm weather at the end of this week is likely to have millions of people rushing to buy hay fever tablets and tissues as the Met Office is predicting it will trigger the release of a huge amount of pollen weeks earlier than usual.

Hay fever usually strikes during the late spring and summer, so to have it flaring now with winter hardly finished may see stocks of remedies being quickly bought up.

The Met Office is warning that a wave of pollen is about to hit Britain, which could spell misery for millions of people.

But the weather forecasting institute is advising that hay fever suffers take a Covid test too – just in case you have confused the symptoms.

The wall to wall sunshine will see many areas experience temperatures around 15 C – after today’s rain belt moves away.

The sunny weather will spark a huge release of early pollen, especially from trees about to burst into bud.

With some sun in the last few days, some sufferers are already reporting runny noses, itching eyes and headaches – class symptoms of hay fever. Chemists, meanwhile, are saying there’s been a run on treatments such as anti-histamines.

Stefano Di Battista, a researcher who has published studies on temperatures in the region, tweeted: ‘Antarctic climatology has been rewritten’. In an email, he added: ‘In about 65 record years in Vostok, between March and October, values above -30C were never observed’.

Jonathan Wille, a researcher studying polar meteorology at Université Grenoble Alpes in France, likened the phenomenon to the June heatwave in the Pacific Northwest, which scientists concluded would have been ‘virtually impossible’ without man-made climate change.

It is believed that the Antarctic ‘heatwave’ is caused by an extreme atmospheric river, or a narrow corridor of water vapor in the sky, on its east coast. Warm air is often transported over the Antarctic interior, but not to this extent or intensity, scientists added.

Met Office meteorologist Alex Deakin said the highest temperatures are expected to be in the North-West, adding: ‘The North-West has got the most potential to see temperatures climb. It is going to be quite noticeably higher than what we would expect at this time of year.

‘The settled and dry conditions are due to high pressure near to the UK. As this moves off eastwards, we see a shift in the wind which combined with local topographical features and weather effects is what leads to the increased temperatures.’

Londoners are expecting to hit the parks as the days finally start to get longer after the first official day of spring this Sunday.

On Saturday, the capital will experience a dry day with long spells of sunshine although breezy with strong coastal winds.

BBC weather forecaster Darren Bett said: ‘The weather is really settling down, there is going to be a lot of dry weather, probably for the next week or so.’

The Met Office predicts it will feeling warmer inland by afternoon with maximum temperatures striking 15C.

Forecasters predicted it will be rather cloudier on Sunday – the first official day of spring – and feeling cooler with risks of some showery rain at times.

The Spring Equinox falls on March 20 this year which marks the first day of the astronomical spring.

The Met Office has warned that a ‘pollen bomb’ is about to hit Britain due to the high spring temperatures.

The wall-to-wall sunshine which many areas are expected to see next week will spark a huge release of early pollen.

The early release of pollen could see millions of people rushing to buy hay fever tablets and tissues.

Hay fever usually strikes during the late spring and summer, so to have it flaring now with winter hardly finished may see stocks of remedies being quickly bought up.

But the weather forecasting institute is advising that hay fever suffers take a Covid test too – just in case they have confused the symptoms.

With some sun in the last few days, some sufferers are already reporting runny noses, itching eyes and headaches – usual symptoms of hay fever. Chemists, meanwhile, are saying there’s been a run on treatments such as anti-histamines. 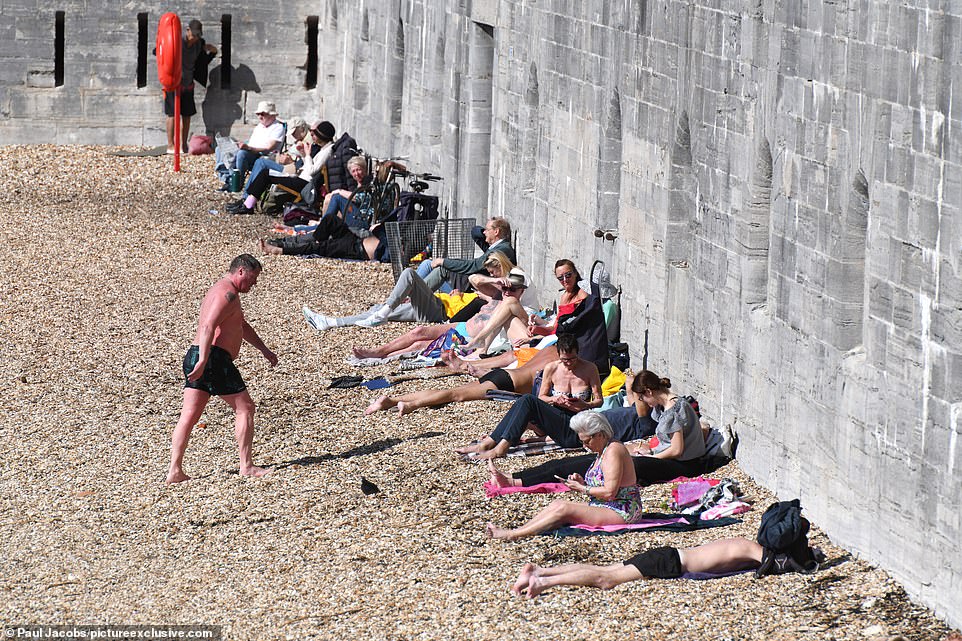 Beachgoers soaking up the sun at the Hot Walls in Old Portsmouth, Hampshire, March 18, 2022 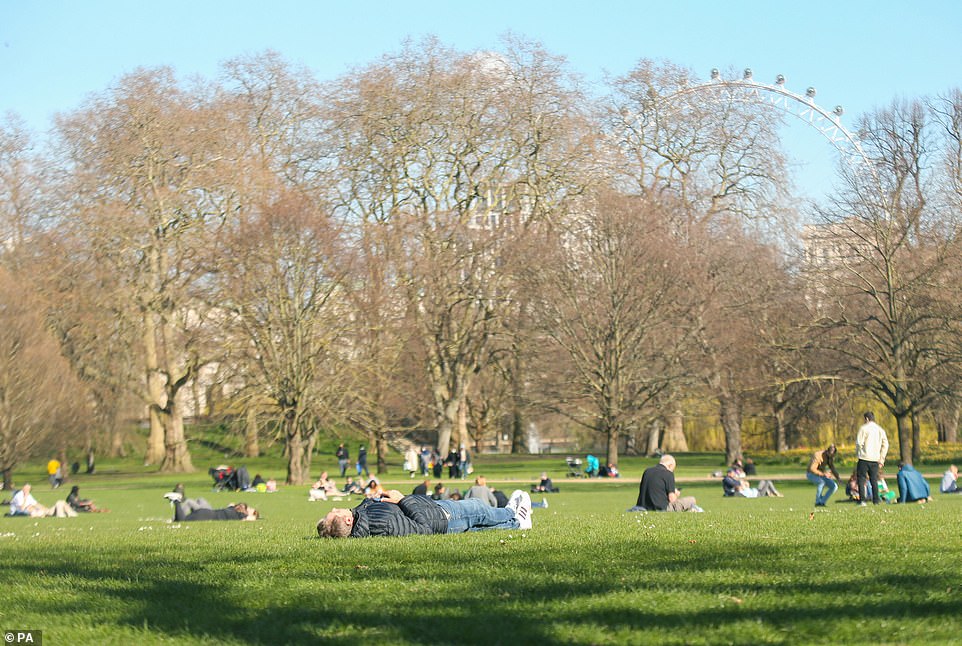 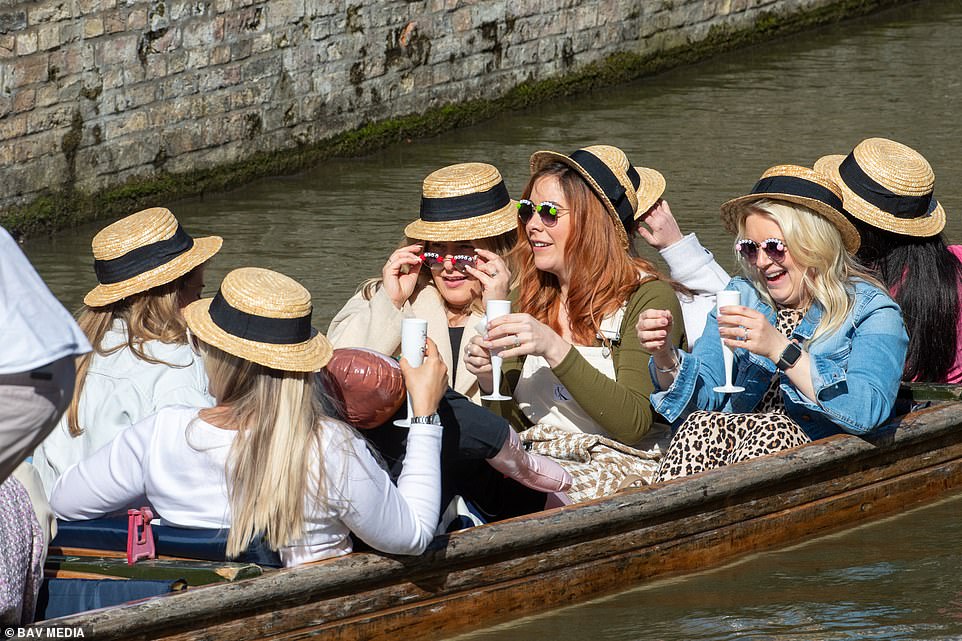 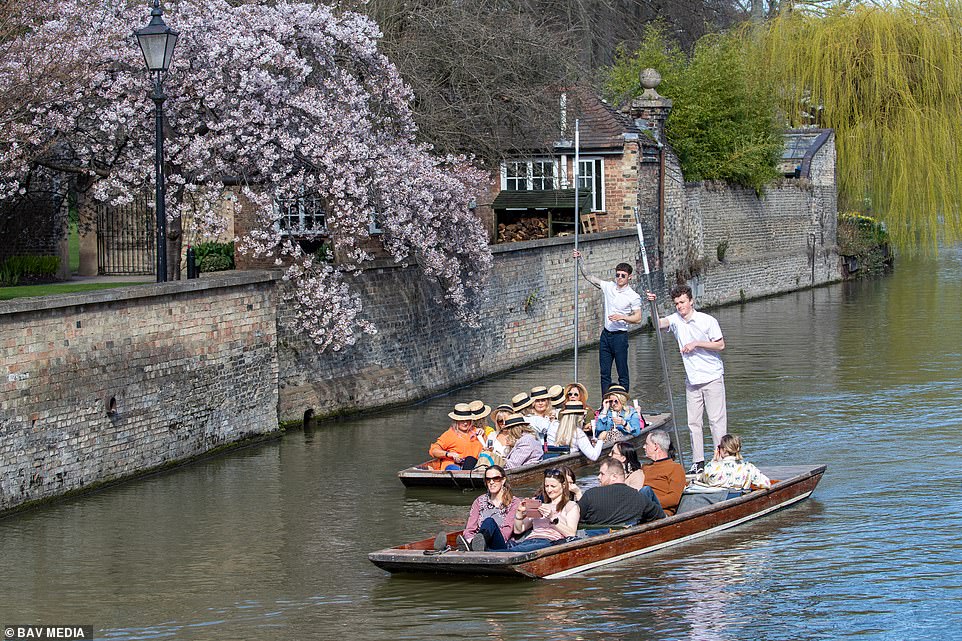 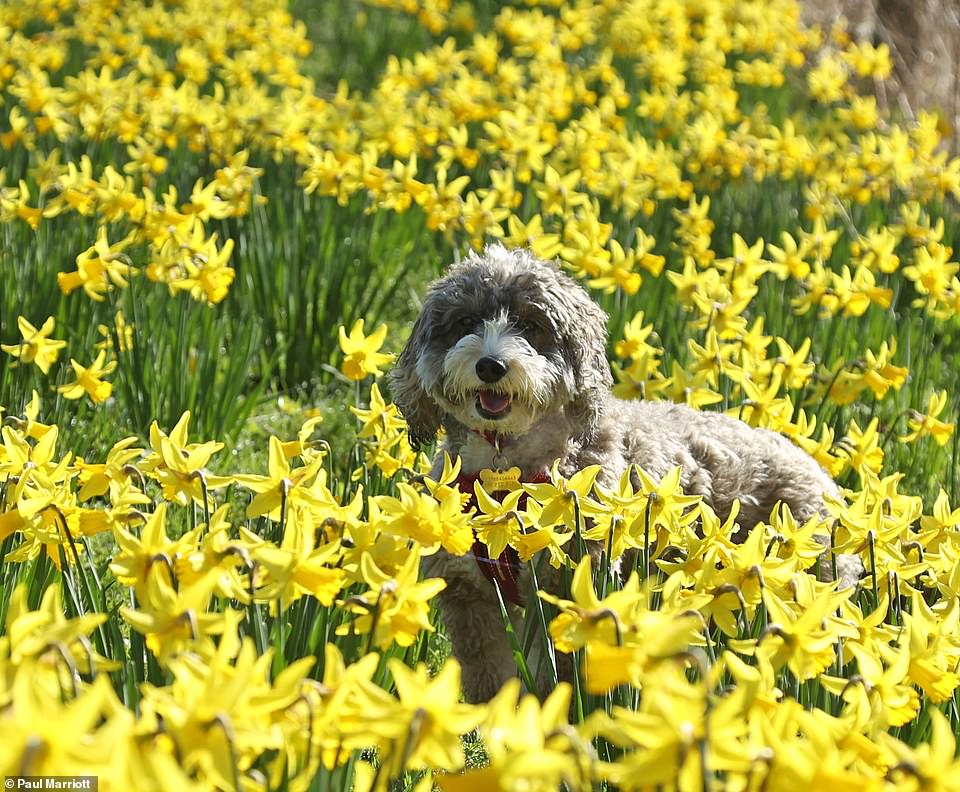 The Met Office said: ‘The mild winter means that the birch pollen is likely to be released earlier than normal – possibly in central and southern areas later on this month.

‘Tree pollen occurs first, typically until mid-May, and affects around 25 per cent of people. Most people are allergic to grass pollen, which actually has two peaks, and the season lasts until July. Weed pollen can be released at any time but the season typically covers the end of June to September.’

Many people report a scratchy throat or runny nose as the most common or sometimes the only symptom they have. Anyone that doesn’t usually suffer from hay fever has been encouraged to take a Covid test to avoid mixing up symptoms.

Allergy UK said: ‘If people start to become symptomatic they should start taking their medications early so they will be most effective when the pollen levels really peak.

‘If they have them already that is great, otherwise talk to a pharmacist who will be able to help.’

The Met Office started its pollen count on Thursday.

Hay fever symptoms tend to be worst around 11am and 6pm because pollen is at nose level.

Pollen starts off sitting on the grass at the beginning of the day. As the day warms up and the grass warms up, the pollen particles are shed and rise in the air. At around 11am, they are at nose level – 5 ft off the ground.

The pollen continues to rise, with it sinking back down to nose level by around 6pm.

Urban areas normally have lower pollen counts than the countryside, although high levels of air pollution in the city centre can bring on hay fever symptoms.