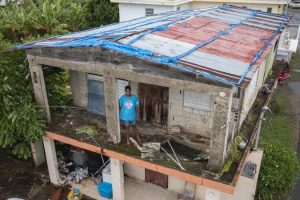 San Juan: Hurricane Fiona was nearing the coast of Puerto Rico on Sunday, threatening to slam the US territory with “catastrophic flooding,” a government agency said, while the island’s fragile power grid was knocked out of service.

The storm was about 40 km southwest of the city of Ponce with maximum sustained winds near 140 kilometres per hour, clearing the threshold for hurricane strength, the National Hurricane Centre said in an update at 2pm, San Juan time. 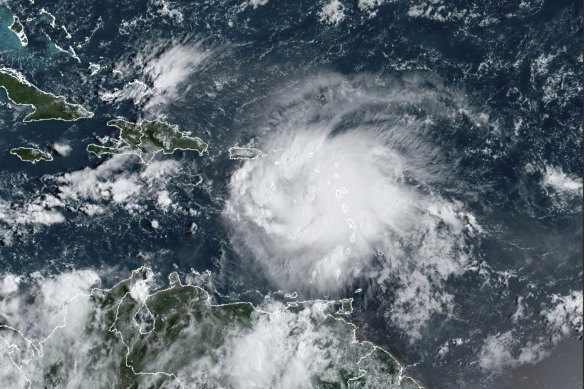 Tropical Storm Fiona in the Caribbean on Saturday.Credit:AP

Electricity was out across the island of 3.3 million people, LUMA Energy, operator of the island’s grid and the Puerto Rico power authority said in a statement. Earlier on Sunday, electricity had been lost to about a third of power customers.

Puerto Rico’s ports have been closed and flights out of the main airport cancelled. Torrential rains and mudslides were also forecast for the Dominican Republic as the storm progresses northwestward, with the Turks and Caicos Islands likely facing tropical storm conditions on Tuesday, the NHC said.

“These rains will produce life-threatening and catastrophic flash flooding and urban flooding across Puerto Rico and the eastern Dominican Republic, along with mudslides and landslides in areas of higher terrain,” the agency said. 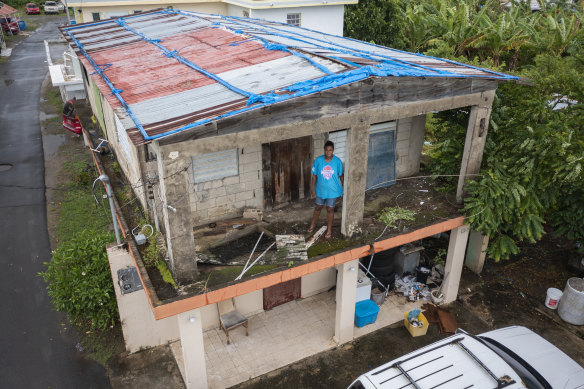 Jetsabel Osorio stands in her house damaged five years ago by Hurricane Maria before the arrival of Hurricane Fiona in Loiza, Puerto Rico.Credit:AP

The rains have increased in intensity since Sunday morning, along with strong wind gusts, residents said.

“It has been raining heavily since 10:00am. At the moment, we still have electricity service,” said Kimberly Ortiz, who lives in Ciales, a town in the centre of the island. “In Ciales, we have felt some wind gusts.”

A wide swathe of Puerto Rico was forecast to see 30 to 40 cm of rain while parts could be hit by up to 63.5 cm, according to the NHC. 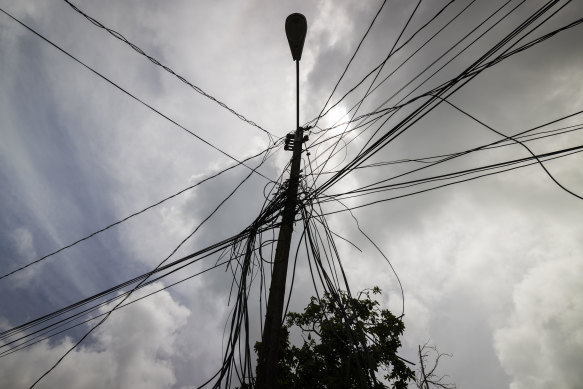 A utility pole with loose cables towers over the home of Jetsabel Osorio in Loiza, Puerto Rico.Credit:AP

Puerto Rico’s grid remains fragile after Hurricane Maria in September 2017 caused the largest blackout in US history. In that Category 5 storm, 1.5 million customers lost electricity with 80 per cent of power lines knocked out.

Authorities have opened more than 100 shelters and closed beaches and casinos, and residents were urged to seek shelter.

There has been one death reported so far tied to Fiona, in the French Caribbean island of Guadeloupe. Authorities said one man as found dead on Saturday after his house was swept away by floods there. France will recognise a state of natural disaster for Guadeloupe, President Emmanuel Macron said on Twitter on Sunday.