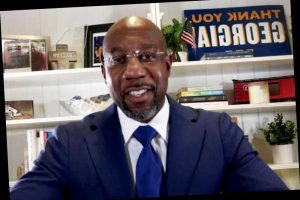 Georgia Senate runoff elections among most expensive in history

Warnock celebrated his apparent win in the Peach State, although none of the major networks called the tight race.

“Georgia, I am honored by the faith that you have shown in me,” Warnock said in an address to supporters.

“And I promise you this tonight: I am going to the Senate to work for all of Georgia, no matter who you cast your vote for in this election.”

Warnock added that the race was predicted to be a tough challenge for a Democrat.

“We were told that we couldn’t win this election, but tonight we proved that with hope, hard work and the people by our side, anything is possible,” Warnock said.

Loefller, meanwhile, who with 97 percent reporting trailed Warnock by about 36,000 votes, did not concede in her address.

“We’re going to win Georgia and save America.”

If Warnock is declared winner of the race, and Democratic candidate Jon Ossoff is victorious in his contest against GOP Sen. David Perdue, the Democrats would seize back control of the Senate, gaining control of both chambers of Congress.