London: Princess Diana refused to wear hats on official visits with children because she needed to be able to cuddle them, a Kensington Palace curator has revealed. 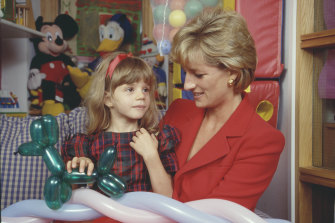 Princess Diana holds a child during a visit to London Lighthouse, a centre for people affected by HIV and AIDS, in 1996.Credit:Getty Images

The original fashion sketch of a blue floral dress regularly worn by Diana on visits to hospitals or to meet children, by designer David Sassoon, is featured in a new exhibition titled “Royal Style in the Making” at Kensington Palace exploring the relationships between designers and royals.

It became known as her “caring dress” because she knew children loved the bright, floral pattern. 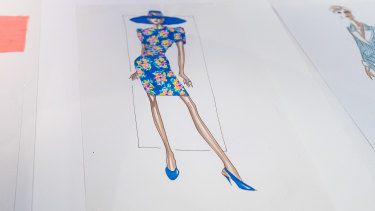 A sketch of the David Sassoon floral dress Princess Diana liked to wear, without the hat, on hospital visits. Credit:Getty Images

Despite the hand-drawn pencil and ink sketch featuring a large matching hat, Diana never wore it with the dress because she said “you can’t cuddle a child in a hat”, Claudia Acott Williams said.

She also often wore “big costume jewellery because she would pick children up and they would play with it”, she added.

Matthew Storey, curator at the Historic Royal Palaces, said this showed “just how carefully she considered people she would meet when selecting outfits for her many public engagements”. 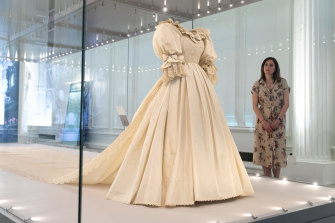 A visitor views Diana, Princess of Wales’s wedding dress displayed complete with its spectacular sequin encrusted train at the “Royal Style In The Making” exhibition at Kensington Palace.Credit:Getty Images

Acott Williams added: “She understood how what you were wearing could really convey warmth… it could reinforce hierarchy or it could undermine hierarchy and create more of a relationship.

“This coloured floral was an important piece in her working wardrobe.”

The exhibition also includes Diana’s wedding dress by David Emmanuel, which is on loan from Princes William and Harry.

There’s also a rare, surviving toile for the 1937 coronation gown of Queen Elizabeth, the Queen Mother, and never-before-seen items from the archives of celebrated royal couturiers of the 20th century, according to the palace.