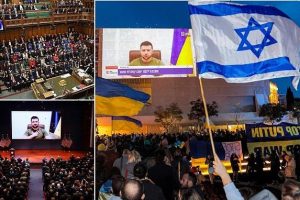 ‘We want to live. Our neighbours want to see us dead’: Zelensky quotes Kyiv-born Israeli hero Golda Meir in address to nation’s parliament – just as he copied Churchill in Britain and Martin Luther King in the US

The former comedian turned politician, 44, has won universal admiration for his leadership of Ukraine as it fights off the Russian invasion.

But while his own legacy as an icon of Ukrainian resistance seems assured, Zelensky has reminded world leaders of those who led them in their own darkest hours as he pushes for military assistance.

In a speech to the House of Commons on March 8, he used the words of Winston Churchill, while in a talk to Congress, he invoked Martin Luther King’s speech ‘I have a dream’ and the invasion of Pearl Harbour.

Now, in an impassioned plea to Israel’s Knesset, he has referred to the rallying cry of national heroine Golda Meir, who was Prime Minister of Israel from 1969 to 1974.

Zelensky told the Israeli politicians: ‘And you know those famous words, every Jewish person knows those words.’

He then quoted Golda Meir: ‘We intend to remain alive. Our neighbors want to see us dead. This is not a question that leaves much room for compromise.’ 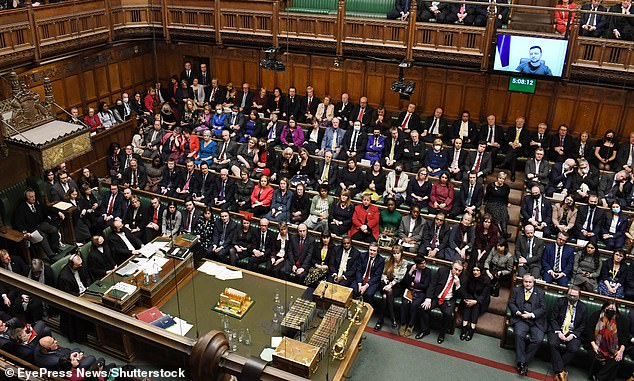 Ukrainian President Volodymyr Zelensky addresses British MPs in the House of Commons via videolink on Tuesday March 8, in an historic event where he received a standing ovation. 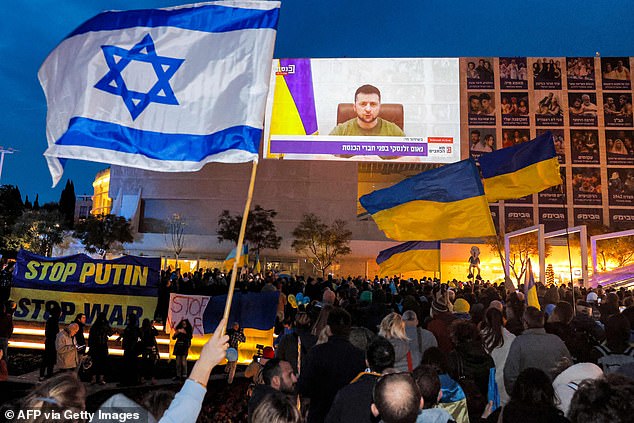 Zelensky added: ‘I don’t need to convince you how much our history got entangled, the history of Ukrainians and Jewish people.’

Meir was born in Kyiv and she memorably led Israel through two conflicts, the Six-Day War in 1967 and the Yom Kippur War in 1973.

Outside the Knesset, crowds of people waved the Ukrainian flag as they watched the televised address.

The Ukrainian president previously earned a standing ovation across the House of Commons for his speech on March 8, in which he recited Churchill’s famous wartime oration ‘We shall fight on the beaches’.

Vowing never to surrender, Zelensky said Ukrainians will fight against Moscow’s forces on land, sea and in the air.

He said: ‘We will not give up and we will not lose. We will fight to the end, at sea, in the air, we will continue fighting for our land, whatever the cost.

‘We will fight in the forests, in the fields, on the shores, in the streets.’

He said Ukraine was fighting a ‘war that we didn’t start and we didn’t want’ as he told MPs ‘we do not want to lose what we have, what is ours’.

Comparing Ukraine to Britain in the Second World War, Mr Zelensky said Ukrainians are fighting to save their country ‘just the same way as you once didn’t want to lose your country when Nazis started to fight your country and you had to fight for Britain’.

He also described the number of children who had been killed in the Russian invasion, telling the Commons: ‘These are the children that could have lived, but these people have taken them away from us.’

Boris Johnson responded to the address by telling MPs that ‘Britain and our allies are determined to press on with supplying our Ukrainian friends with the weapons they need to defend their homeland as they deserve’. 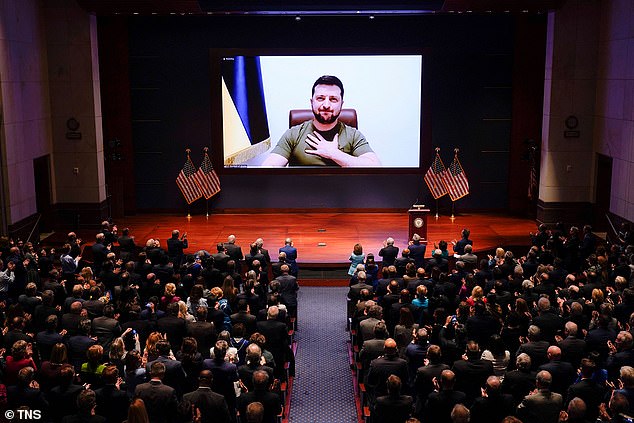 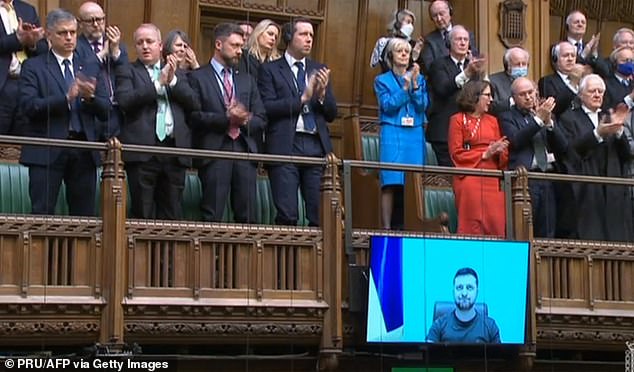 British MPs gave a standing ovation to Ukraine’s President Volodymyr Zelensky after he spoke to them by video-link in the House of Commons on March 8,

Zelensky also called on the US Congress for help four days ago, reminding them of the trauma of the September 11 attacks and Pearl Harbour, as well as the spirited words of civil rights leader Martin Luther King.

He said: ‘I have a dream…I have a need. I need to protect our sky. I need your decision… exactly the same you feel when you say “I have a dream”.

Zelensky included in his remarks a graphic video, showing the death and destruction that Ukraine has endured. The images included the deaths of young children and mass graves for civilian and military casualties.

Several US politicians were in tears as it played and he received several standing ovations. 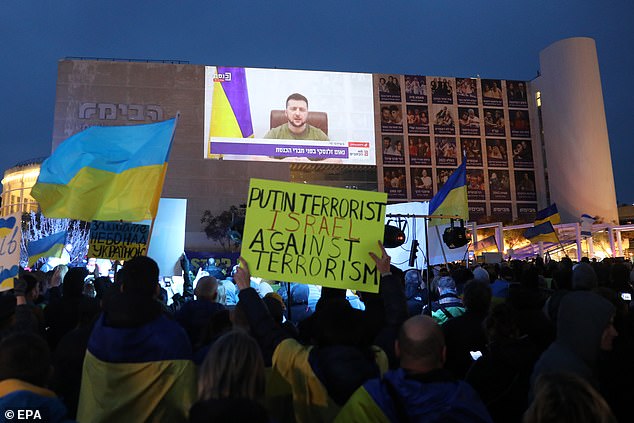 In his address to Israel today, Zelensky also chided its Parliament, asking why it was not providing missile defences to his country or sanctioning Russia over its invasion.

Replying to Zelensky, Israeli Foreign Minister Yair Lapid was non-committal, saying in a statement that Israel, which has sent a field hospital and other humanitarian aid to Ukraine, would continue to assist its people ‘as much as we can’.

A mediator in the Ukraine-Russia crisis, Israel has condemned the Russian invasion. But it has been wary of straining relations with Moscow, a powerbroker in neighbouring Syria where Israeli forces frequently attack pro-Iranian militia.

‘Everybody knows that your missile defence systems are the best … and that you can definitely help our people, save the lives of Ukrainians, of Ukrainian Jews,’ Zelensky, who is Jewish himself, told the Knesset in a video call.