Home » Business » This Is The Largest Dinosaur In History

This Is The Largest Dinosaur In History 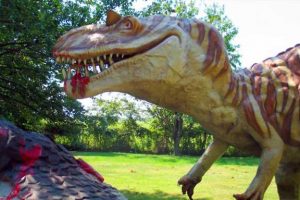 The “age of dinosaurs”, officially known as the Mesozoic era, lasted from 252 million years ago until 66 million years ago. Scientists believe that period ended when an asteroid hit Earth. Expert observations about the period, particularly about the size and type of dinosaurs have changed over decades, particularly as new fossils are discovered. These discoveries are so frequent now that the Smithsonian publishes “The Top Ten Dinosaur Discoveries” each and every year.

Some of these discoveries have helped determine the largest dinosaur that ever lived. According to the BBC, the biggest dinosaur ever discovered was found in 2014.  It reported that “Weighing in at 77 tonnes, it was as heavy as 14 African elephants, and seven tonnes heavier than the previous record-holder, Argentinosaurus.” Last year, the top spot was taken based on a discovery in Argentina. According to Phys.org, “A team of researchers with Naturales y Museo, Universidad de Zaragoza, and Universidad Nacional del Comahue has found evidence that suggests the remains of a dinosaur discovered in Argentina in 2012 may represent a creature that was the largest ever to walk the Earth.”

Add to the confusion whether “size” should be determined by weight or length. The heaviest discovered weighs over 100 tons. The longest can be over 130 feet long.

Several pieces of analysis agree about the fact that the Titanosaur is the largest dinosaur. According to Britannica, it weighed 77 tons and was 140 feet long. Titanosaur lived about 100 million years ago, and has an official name. “Patagotitan mayorum may have been the world’s largest terrestrial animal of all time, based on size estimates made after considering a haul of fossilized bones attributed to the species.”

The candidate for the largest dinosaur could change again. According to Discovery, Mary Ann Mantell was the first person to find fossilized bones while she was on a walk in 1822. If men remain on the Earth as long as dinosaurs did, there is bound to be another discovery that adds to the long list of “largest dinosaurs”.