Home » Business » Giving Covid booster shots to healthy people is 'not right,' WHO says in plea to wealthy nations

Giving Covid booster shots to healthy people is 'not right,' WHO says in plea to wealthy nations 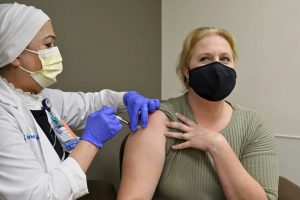 The WHO lacks sufficient scientific data to condone the widespread use of boosters, Director-General Tedros Adhanom Ghebreyesus said at a press briefing Tuesday. The organization has worked to address vaccine inequities since last winter, asking world leaders Sept. 8 to impose a moratorium on third doses through the end of the year to redirect surplus vaccines to low-income nations.

"There are countries with less than 2% vaccination coverage, most of them in Africa, who are not even getting their first and second dose" Tedros said. "And starting with boosters, especially giving it to healthy populations, is really not right."

In Africa, just under 3.5% of the eligible population is fully vaccinated, WHO officials said. The WHO reiterated its approval for the administration of booster doses for the immunocompromised, but said Africa was on track to miss the director-general's goal of a 10% vaccination rate in every country by the end of the year.

Giving Covid booster shots to healthy people is 'not right,' WHO says in plea to wealthy nations

UK sets out pandemic plan for fall and winter; booster shots for over 50s to begin next week

More workers are facing mandatory Covid vaccination or no job

Booster rollouts have already begun across the United States, where the Centers for Disease Control and Prevention report that nearly 54% of the population is fully vaccinated. More than 1.8 million boosters have already been administered, the CDC said. If the WHO signs off on boosters, their distribution would require an investment of approximately $1 billion per year in Africa, Benedict Oramah, president and chair of the African Export-Import Bank's board of directors, said at the briefing.

Though several nations have pledged to donate hundreds of millions of vaccine doses to the developing world, trade restrictions have made it difficult for low-income nations to buy vaccines on their own, said Strive Masiyiwa, the special envoy to the African Union for Covid-19. Rolling back those restrictions would help facilitate increased vaccinations across Africa, Masiyiwa said.

"We want access to purchase," Masiyiwa said. "We call on those countries that have put restrictions on exports – exports of vaccines as finished products, exports of ingredients, drug substance."