Home » Business » States With the Most Registered Weapons

States With the Most Registered Weapons 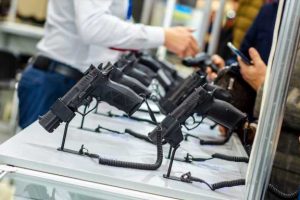 The right to gun ownership is protected by the Second Amendment of the U.S. Constitution – and with an estimated 393 million civilian-owned firearms nationwide, many Americans choose to exercise that right. But, while the U.S. has some of the most permissive gun laws among wealthy, developed nations, some of the laws restricting ownership of firearms have been on the books for decades.

In 1934, the National Firearms Act was signed into law by President Franklin Roosevelt. Among its provisions, the law stipulated that certain types of firearms need to be registered with the Secretary of the Treasury, and that owners of those firearms were subject to a $200 tax – equal to nearly $4,500 today. The types of weapons covered by the law, such as machine guns and short-barreled shotguns, were largely associated with organized crime during the Prohibition Era, and the NFA was designed to curtail their use. (Here is a look at the guns used most to commit crimes in America.)

Over the nearly 90 years since the law’s passage, some significant changes have been made – including a 1986 provision banning the transfer of possession of machine guns not grandfathered in. Otherwise, Americans seeking to own NFA weapons must first receive official approval after completing a registration application and submitting a fingerprint card and the $200 tax payment – which has never been updated to adjust for inflation.

Weapons registered under the NFA fall into one of six categories: machine guns, silencers or supressors, short-barreled rifles, short-barreled shotguns, destructive devices such as bombs or grenades, and “any other weapon,” which is a catch-all classification that includes certain firearms that can be concealed in items such as pens or walking canes.

Using data from the Bureau of Alcohol, Tobacco, Firearms, and Explosives, 24/7 Wall St. identified the states with the most weapons registered under the NFA. States are ranked by the number of registered weapons adjusted for population.

Click here to see the states with the most registered weapons.