Buffett back bashing Bitcoin, claims it 'doesn't produce anything' 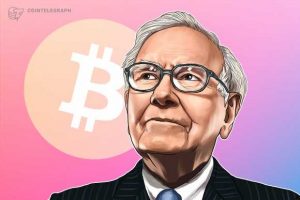 Billionaire investor Warren Buffett has once again slammed Bitcoin, asserting he “wouldn’t take” all of the BTC in the world for just $25.

The 91-year-old, with a net worth of around $124 billion, is an avid crypto skepticthat once called Bitcoin “rat poison squared.” His arguments often stemaround digital assets offering no tangible value, and the community hasbeen quick to highlight on this occasion that there is a myriad of use cases and utility in crypto that Buffett likely hasn’t researched.

Speaking at the Berkshire Hathaway Annual Shareholder meeting on April 30, Buffett commented on crypto in relation to the growing mainstream adoption of the sector. He noted that while he has no idea if the value of BTC will increase moving forward, he is sure that “it doesn’t produce anything.”

Buffett argued that he would happily write “a check this afternoon” worth $25 billion for 1% of all the farmland or “apartment houses” in the U.S. as they both produce real-world utility, but wouldn’t even spend $25 for 100% of the supply of Bitcoin:

“Now if you told me you own all of the Bitcoin in the world and you offered it to me for $25 I wouldn’t take it because what would I do with it? I’d have to sell it back to you one way or another. It isn’t going to do anything. The apartments are going to produce rent and the farms are going to produce food.”

“Assets, to have value, have to deliver something to somebody. And there’s only one currency that’s accepted,” he added.

Well-known crypto proponents were mocking Buffett’s comments on Twitter over the weekend.

Co-founder of top crypto venture capital firm Andreessen Horowitz (a16z) Marc Andreessen noted that “it’s so wild he says this stuff while nakedly shilling diabetes,” in reference to an ensemble of See’s Candies boxes and soda cans on Buffett’s desk during the speech.

In response, Tesla CEO and Twitter owner Elon Musk said “haha he says ‘Bitcoin’ so many times.” While MicroStrategy CEO Michael Saylor chimed in that “everyone can’t stop talking about Bitcoin.”

One crypto skeptic that is at least softening their stance a little, is JPMorgan CEO, Jamie Dimon.

The banker once described Bitcoin as “fraud” and has continuously reiterated that he has no interest in backing the sector on a personal level, despite JP Morgan warming up to digital assets significantly over the past couple of years.

Speaking with Omaha-based news outlet KMTV 3 on Friday, Dimon noted that while he still doesn’t particularly like crypto and urges caution when investing in it, he will “defend your right to do it.”

He also went on to highlight that crypto does serve important use cases at times, especially in regards to cross-border payments:

“Not all of it is bad. If you said to me ‘I want to send $200 to a friend in a foreign country,’ that could take you two weeks and cost you $40. You could do it through a digital currency and it’ll take you seconds.”