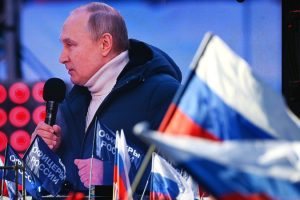 Russia’s economy is poised to suffer its biggest hit since the collapse at the end of the Cold War, sending prices soaring by 30 per cent and real incomes -plummeting by more than a quarter, new research concludes.

It indicates the devastation caused by the war in Ukraine, sanctions and boycotts will be on a scale not experienced for at least a generation. 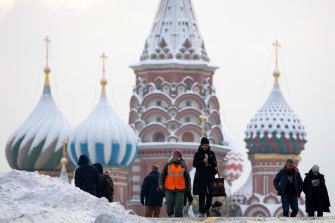 Russia’s economy is facing its biggest hit in at least a generation.Credit:Bloomberg photo by Andrey Rudakov

GDP is expected to plunge by 14 per cent, according to the Centre for Economics and Business Research, marking a bigger fall than the economy suffered in the pandemic, the global financial crisis or Russia’s own financial crisis in the late 1990s.

On top of that the collapse in the rouble, which has lost more than one quarter of its value since the invasion, and surging commodities prices, will add severe pressure to the cost of living.

Prices rose by more than 4 per cent in the first two weeks of March alone, putting the pariah state on track for an annual inflation rate of 30 per cent by early 2023, according to the CEBR’s calculations for the Ukrainian government.

Meanwhile, even if pay increases by 10 per cent a year, real earnings will drop by an estimated 18 per cent over the next 12 months and by more than a quarter by the end of 2024. Russia is a major exporter of food and energy so basic goods are likely to remain available, but imports and luxuries will disappear from the shelves.

The squeeze on Russian living standards is likely to be severe and will be hard to offset.”

Douglas McWilliams, at the CEBR, said the crunch in living standards is on the same scale as that suffered by Iranians when the country was subject to Western sanctions, leading to inflation ranging between 9 per cent in 2016 and almost 40 per cent last year.

He said there was “some scope” for the Kremlin to use its resources to limit the rise in prices, but any such move could only be partial and temporary.

“With a budget surplus from high oil revenues there is scope for subsidies to be increased, though at the expense of increasing market distortions,” Mr McWilliams said.

“Wages could be increased more, though to prevent Russia becoming uncompetitive these would probably have to be matched by a fall in the value of the rouble.