Home » Politics » Trump and his allies have embraced, promoted and counseled Kyle Rittenhouse since his acquittal 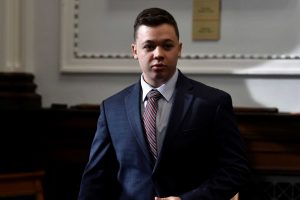 Since he was acquitted of homicide and other charges last Friday, Kyle Rittenhouse has said he wanted to stay out of politics, and that he was disturbed by how his case became politicized.

"How polarized it became is absolutely sickening: Right or left, people using me for a cause that should never have been used as a cause," the 18-year-old said earlier this week.

Yet Rittenhouse, who argued he was acting in self defense when he fatally shot two people during protests last year in Kenosha, Wisconsin, has emerged as a symbolic figure for the pro-Trump right wing as the former president considers running again and wields power by issuing endorsements in various Republican primary races.

Some prominent conservatives have worked to make a hero out of Rittenhouse, who was armed with an AR-15-style rifle on the streets of Kenosha during protests that sprung up after the police shooting of Black man Jacob Blake. Rittenhouse made the comments about politics and polarization on Tucker Carlson's Fox News show, which had a crew embedded with the Rittenhouse team during his trial. He has appeared alongside Republican operatives in photos, and he met with Donald Trump himself at the former president's private Mar-a-Lago club in Florida.

One key figure in Rittenhouse's post-acquittal life is Jillian Anderson, a former Fox News guest booker who once was a contestant on "The Bachelor." A former cheerleader for the team now known as the Washington Football Team, she is currently a self-employed booker, producer, publicist and director of communications, according to her LinkedIn page.

Anderson was photographed next to Rittenhouse at a Florida restaurant after he was acquitted. She was also pictured in another group that included Carlson and subsequent other photos. Almost all of these pictures have been posted on Anderson's social media pages.

"I'm working with the team," Anderson told CNBC in a Twitter message after she was asked about her role with Rittenhouse. She then requested that CNBC email her. Since then, Anderson has yet to respond to multiple requests for comment.

Anderson has been linked to Trump and his conservative allies for years. She recently was paid over $10,000 for media relations consulting by a political action committee backing Josh Mandel's Ohio Senate campaign, according to Federal Election Commission records reviewed by CNBC. The committee is called Team Josh and has paid Anderson for what's described as "media relations consulting." Anderson posted a split screen photo on her Twitter page this week of herself, alongside another featuring Mandel holding up a laptop. Mandel has called Rittenhouse an "American hero" and "role model."

Anderson and Rittenhouse have also recently been photographed next to Adam Waldeck, who worked on former Republican House Speaker Newt Gingrich's 2012 presidential campaign before running two right-leaning groups that do not publicly disclose their donors. One of those organizations took aim at Hillary Clinton during the 2016 election before changing its name to 1776 Action to focus on fighting critical race theory education. Waldeck appeared in a photo with Rittenhouse that was posted to Anderson's social media.

The Falkirk Center is a think tank backed by evangelical Liberty University. It was co-founded by Kirk and Jerry Falwell Jr., who resigned as president of Liberty University following various scandals. Kirk left the think tank this year. The Falkirk Center's podcasts, according to The Bulwark, have been a source of various conspiracy theories, including those questioning the results of the 2020 presidential election.

Anderson boasts in a photo that she credits Jack Posobiec, a longtime right-wing operative and activist, for what she describes as her "behind the scenes schemes."

"For the last 12+ months  @jackmposobiec has been one of the best front men for a lot of my behind the scenes schemes. I appreciate you brother!" she said in a previous Instagram post.

Another photo on Anderson's Instagram page shows her at a November event at Trump's Mar-a-Lago. The gathering was to celebrate the America First Policy Institute, a nonprofit think tank that was created to promote several of Trump's preferred policies. The event featured Trump himself and the pictures show Anderson with multiple Trump allies, including Sen. Lindsey Graham, R-S.C., and Rep. Madison Cawthorn, R-N.C. Cawthorn was among a group conservative lawmakers who said Rittenhouse could come work for his office.