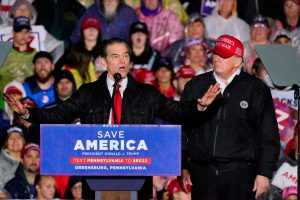 Although the event was designed to promote Oz’s run for the state’s Senate seat, the majority of the crowd — many of whom waited for hours in the pouring rain — was clearly gathered to see Trump. Reaction to Oz was icy at best, with the audience letting out an audible groan when Trump began stumping for the fellow reality TV charlatan, whom the former president referred to as his “friend.” The boos were even more apparent after Trump implored Pennsylvania Republicans to “secure a massive victory” for Oz.

The Jan. 6 Committee Has a Subpoena for Parler's Founder

Meet the Beatle: A Guide to Ringo Starr's Solo Career in 20 Songs

The Beatles in India: 16 Things You Didn't Know

The apathetic response to Oz was a running theme throughout the evening. The Daily Beast reports that the crowd jeered when pro-MAGA Rep. Guy Reschenthaler (R-Penn.) explained his reasons for backing Oz in the May 17 primary, while Huffington Post reporter Daniel Marans shared video on Twitter of Trump supporters booing Oz campaign ads that played before the rally.

Even so, between his usual rants against “liberal Democrats” and self-avowed enemies like Sen. Mitch McConnell (R-Ken.), Trump attempted to sell his supporters on Oz in a variety of ways, ranging from the banal to the bizarre — even going so far as to remind the audience that Oz was “in the bedrooms” of women across America, as if that was a good, totally un-creepy asset for a would-be politician. (This isn’t the first time Trump has praised Oz’s popularity with female voters; after initially endorsing Oz last month, the ex-president boasted that women “are drawn to Dr. Oz for his advice and counsel.”)

“Dr. Oz is running against the liberal Wall Street Republican named David McCormick,” Trump said of Oz’s opponent, adding that the former Under Secretary of the U.S. Treasury for International Affairs “may be a nice guy, but he’s not MAGA.”

Losing out on Trump’s coveted endorsement appears to have Camp McCormick concerned about their prospects in Pennsylvania — and, given the recent success of Trump-backed author-turned-venture capitalist J.D. Vance in Ohio, it’s a fear that’s not entirely unfounded. According to Bloomberg, the candidate outspent Oz by over $6 million last month. In recent days, McCormick has zeroed in on Oz’s dual Turkish citizenship, suggesting the TV doctor’s ties to the country make him a potential threat to American democracy.

“These are pathetic and xenophobic attacks on Dr. Oz by David McCormick, who should be ashamed of himself,” Oz campaign spokesperson Brittany Yanick told The Philadelphia Inquirer. “Now that he lost President Trump’s endorsement, he’s resorted to sad and desperate attacks that are no different than the tropes used against Catholics and Jews.”