Beyond Bitcoin: How Technical Features are Fueling Altcoin Adoption

Cryptocurrency’s bold march toward mainstream adoption is well underway, evidenced by skyrocketing market caps, and media saturation. It is now clear to all but the most stubborn of critics that cryptocurrency has a permanent place in global economics, and thus the race is now on to determine which platforms will emerge as the most popular. Although Bitcoin is receiving the most attention, altcoins are moving forward as well. Increasingly crypto investors are giving priority to technical qualities as they choose which coins to buy. Those cryptos perceived to be most useful, or most efficient, are rapidly becoming major players in the crypto space.

Presently, crypto is primarily adopted as a store of value rather than as actual currency to be spent. Nevertheless, mainstream adoption will involve mass transfers, and successful cryptos will need to process thousands of transactions per second. Most platforms, including Bitcoin, cannot currently handle this level of traffic. A few can, however, and investors are taking notice. The most notable of these cryptos is Iota, which due to its unique architecture is (in theory) infinitely scalable. Iota also can be transferred without network fees. Despite being available on only a handful of exchanges, Iota’s value has soared in recent weeks, moving from $1.43 on December 1 to over $5.00 today. Iota is now the sixth most valuable crypto by market cap, with a total value of over $14 billion dollars. 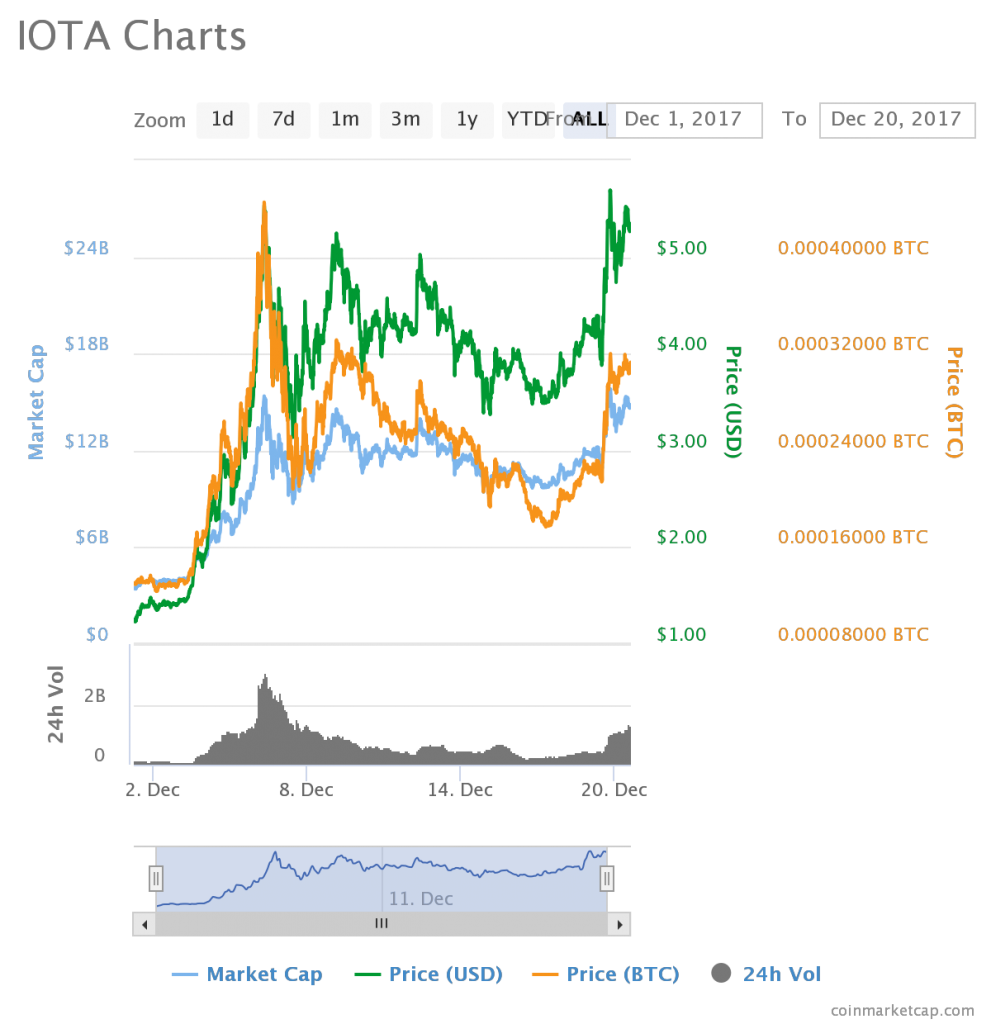 Vertcoin is another crypto that has enjoyed substantial value growth due to technical advantages. Vertcoin is very similar to Bitcoin, with a notable exception being resistance to ASIC mining. This quality makes it more appealing to small-scale and beginning miners. However, its most significant advantage is its inclusion in plans for atomic swaps with Litecoin and, presumably, Bitcoin. This development, currently being tested, will enable near instant transactions across blockchains. Thus, once active, Vertcoin will be a viable substitute for any BTC or LTC transaction. This fact has pushed Vertcoin from $1.00 on October 1 to $9.00 on December 20. 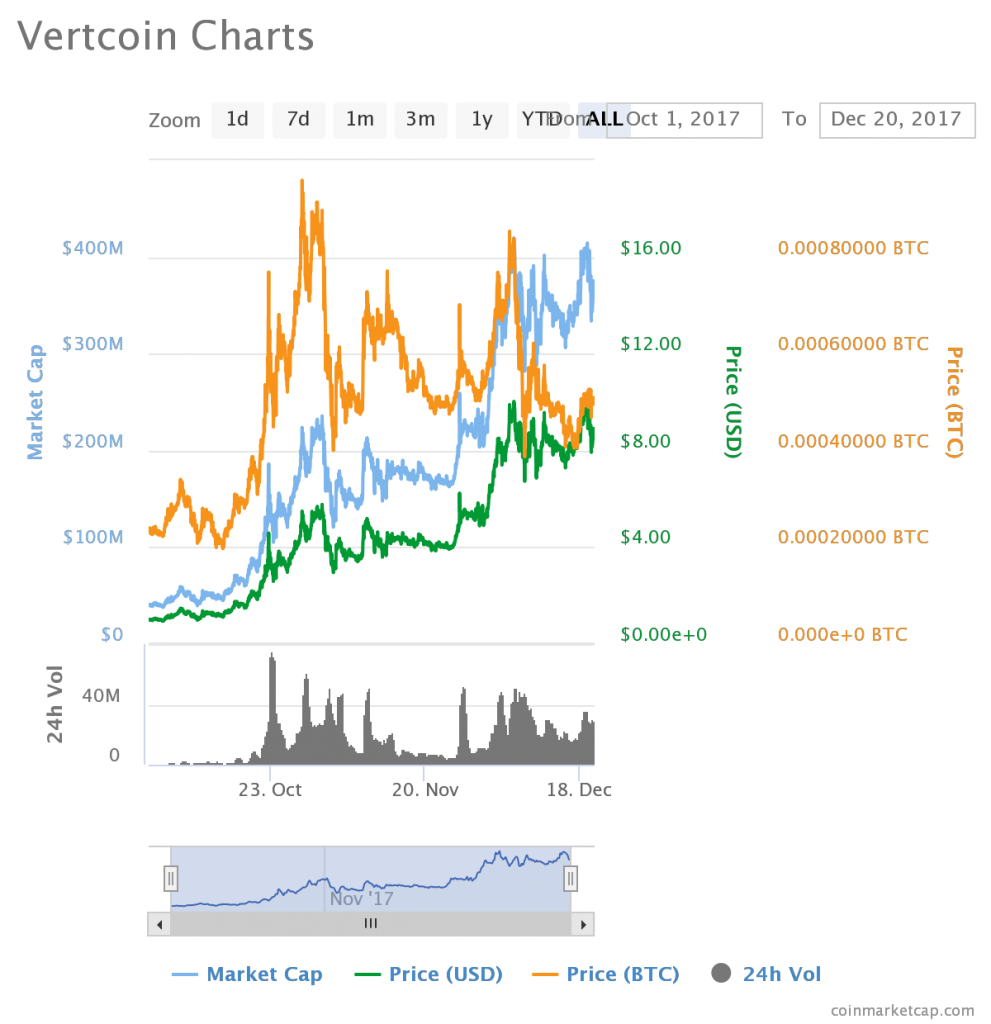 Among the most substantial cryptos to be boosted by perceived technical advantages is Verge, which is similar to Monero in that its focus is on anonymity. Verge claims faster transaction times and greater scalability, and was recently endorsed by John McAfee. The result has been an astounding 1,200 percent increase in value during December, presently reaching a high $.065. 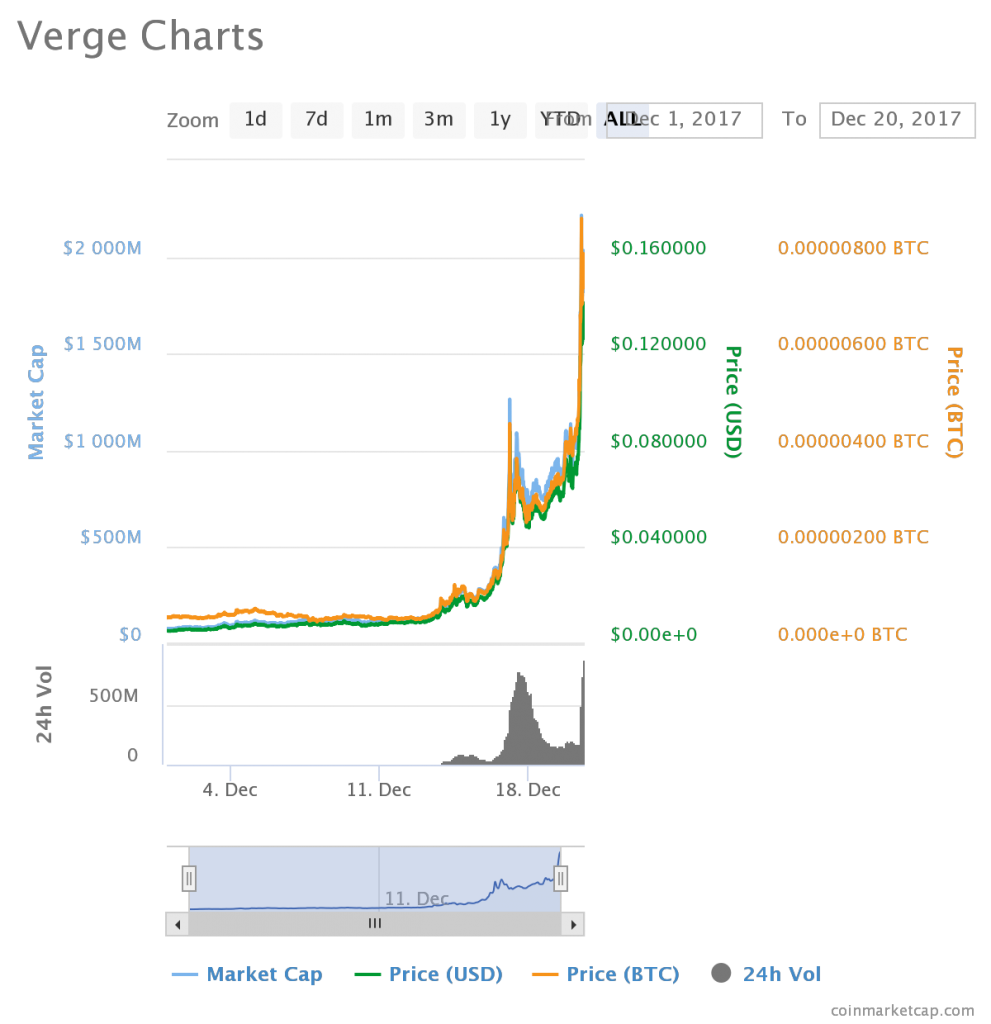 Many other cryptos are experiencing similar growth based on the notion that they are better suited for mass use. EOS and Cardano, for example, are seen by many as superior to Ethereum, and have soared in market cap. Dash has enjoyed big gains based on its long-held claim to be more useful than Bitcoin, and Raiblocks has emerged from relative obscurity because, like Iota, it can be used without fees.

Bitcoin developers have, of course, sought to upgrade the platform to compete with altcoins. Upgrading the network has, in fact, been a source of great contention between miners and developers for over two years. SegWit, and the upcoming Lightning Network promise to make Bitcoin more competitive, but it remains to be seen if these advances will enable Bitcoin to remain the flagship cryptocurrency long-term. Even with these upgrades, crypto advocates universally agree that Bitcoin’s greatest asset is its name recognition, and the fact that it remains the primary gateway for purchasing cryptocurrency with fiat. As more cryptos become commonly known, and more fiat exchanges adopt altcoin options, it is quite reasonable to assume that Bitcoin will decline in importance.

The fact that better designed altcoins are gaining market share is a reflection of the fact that the blockchain revolution underway is not limited to Bitcoin adoption. Rather, it is a movement that promises to radically improve many aspects of global economics, logistics, and management. Bitcoin was never intended to be the only cryptocurrency, but rather it was a proof-of-concept network, designed to demonstrate distributed ledger technology. In that sense, it has been a tremendous success. Competing altcoins with improved features are a natural progression of Bitcoin’s mission. In fact, the blockchain revolution would be a failure without them.�

Crypto investors are certainly wise to consider the advanced features of many altcoins, but there is still significant developments ahead that will affect all cryptos. It remains to be seen how cryptocurrency will ultimately be balanced against fiat on a global scale. There are also many more technical developments that have yet to be released. Thus, although digital assets are certain to become commonly owned over the next months and years, which specific platforms will find common usage is still very much a matter of speculation.