Home » Blockchain » Despite Crackdown on Trading, Crypto and Blockchain in China Are Alive

Despite Crackdown on Trading, Crypto and Blockchain in China Are Alive

China has banned cryptocurrency trading and initial coin offerings (ICO) in late 2017 and reaffirmed its negative stance towards the market this year. Still, local developers are continuing to introduce innovative Blockchain projects on the global stage.

essentially disabling anyone within the country from accessing Bitcoin exchanges and digital asset trading platforms.

The government’s ban on Bitcoin-related sites and platforms signaled its intent to essentially disallow any cryptocurrency activity within the country, given that the usage of virtual private networks (VPNs) is against the Chinese law.

Overseas transactions and regulatory evasion have resumed. Risks are still there, fueled by illegal issuance, and even fraud and pyramid selling,

Despite the strict crackdown on cryptocurrency trading and Blockchain-related platforms, former Chinese cryptocurrency exchanges like OKEX and Huobi have continued to thrive over the past several months, processing over $1 bln on a daily basis.

In March 2018, OKEX, the virtual currency trading platform of OKCoin, for the first time overtook Binance, formerly the biggest exchange in the market. 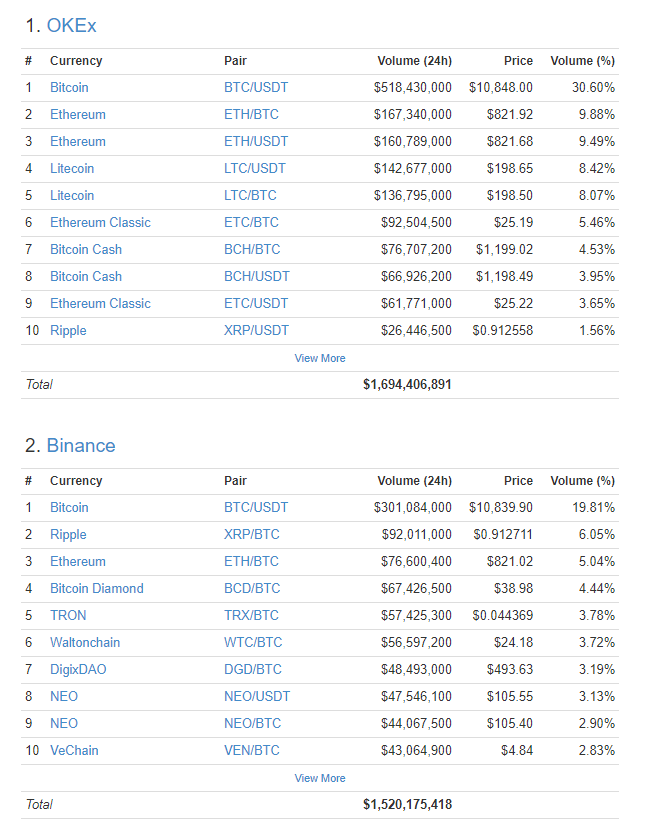 The relocation of Huobi and OKEx from China to Hong Kong opened a gateway for Chinese cryptocurrency traders into the global market.

The ban did not stop them [Chinese investors] from buying cryptocurrencies. In the last few weeks, we have seen a lot of mainland customers opening up accounts at TideBit. They still want to play the game. I see a growing need in that they will come to Hong Kong or Singapore to buy cryptocurrency.

Tsang added that the explosive growth rate of the Hong Kong cryptocurrency market fueled by the migration of investors from the mainland to Hong Kong led local cryptocurrency exchanges to expand at a rapid rate, as seen in the rise of OKEx and Huobi.

Still, as Cointelegraph reported, many Blockchain projects, entrepreneurs, investors, and analysts have been cautious in hosting events, conference, and meetups due to the Chinese government’s unpredictability and its tendency to ban anything that it sees as a threat to its current financial system.

People in China will be more careful about marketing these events, and a lot of that marketing activity will come to Hong Kong in the form of conferences and communities.

In January 2018, PBoC went as far as to request banks to inspect the accounts of cryptocurrency traders and ensure that bank accounts are not utilized for trading.

Every bank and branch must carry out self-inspection and rectification, starting from today. Service for cryptocurrency trading is strictly prohibited. Effective measures should be adopted to prevent payment channels from being used for cryptocurrency settlement,

On February 27, one of China’s most influential retailer in JD.com announced the creation of AI Catapult Blockchain incubation program, to fund innovative Blockchain projects and cryptocurrencies. JD.com said in a statement:

[JD.com plans to] partner with innovative blockchain startups to build new businesses and create and test real-world applications of their technologies at scale. We are excited to work with some of the world’s most innovative startups to explore ways we can scale these cutting edge technologies for the future of retail and other industries, as well.

JD.com vice president Bowen Zhou emphasized that projects within the company’s Blockchain incubator will be given opportunities to test their technologies and integrate their core Blockchain platform into the existing infrastructure of JD.com.

One of the Blockchain projects it has partnered with is Bluzelle, a Singapore-based Blockchain protocol targeting the deployment of decentralized Internet. Bluzelle, known for its swarm technology that enables groups of nodes to store tiny pieces of information, has already built Blockchain-based applications for many of the world’s large conglomerates such as Microsoft, HSBC, MUFG, KPMG, and ZagBank.

With emphasis on the magnitude of JD.com’s operations in China, Bluzelle CEO Pavel Bains wrote:

JD.com is China’s largest retailer, online or offline, and the world’s third-largest internet company by revenue. With more than 266 million active customers, JD is a direct seller of millions of brands from around the world and hosts a marketplace of more than 160,000 trusted merchants. The company, which owns and operates its own advanced nationwide logistics systems, has embraced AI and blockchain across its operations. The value of NEO started to increase in late 2017 due to its branding as China’s Ethereum, and growing demand towards NEO from investors in the Asian market, as seen in the chart above. But, in February, the market valuation of NEO started to decline, mostly due to criticisms by such community experts as Eric Wall and Emin Gün Sirer towards NEO’s consensus algorithm.

Crypto is everything but dead in China

Overall, in spite of the Chinese government’s efforts to completely shut down cryptocurrency trading and Blockchain-related projects, the demand towards Blockchain technology within the local market is continuing to increase, and large-scale conglomerates like JD.com could be interested in the development and commercialization of cryptocurrencies.