Home » Business » Does Martin Luther King's dream drive business to do what is right in 2021? 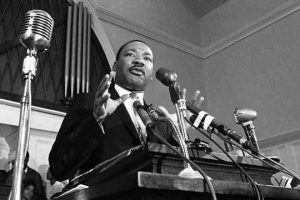 Apple CEO Tim Cook says he hopes the initiative will ‘make a big difference’ in people’s lives. He also defends Apple’s suspension of Parler from its app store, saying the app could be reinstated ‘if they get their moderation together.’

As our nation officially celebrates the 35th Martin Luther King Jr. federal holiday on Monday, it is fair to ask whether better days are ahead or have the ravages of race, and now COVID, indelibly stained the fabric of America?

We live today in the best of times and the worst of times. An age of wisdom and faith, foolishness and folly. A time of light yet darkness; belief yet doubt. A nation of laws, not men, united but deeply divided. Bound by knowledge, burdened by nescience.

King’s dream, while visible from the mountaintop, may yet be deferred as disparities in income, opportunity and law enforcement unfurl in black and white. Although some of the American descendants of African slaves have reached the pinnacle of business, arts and government, the majority still experience the nightmare of inequality.

The net worth of American billionaires has soared by $1 trillion – to a total of $4 trillion – since the coronavirus pandemic began. Many, if not most, are technology titans whose stock holdings have soared. For those shareholders along for the ride, it has been nothing short of glee. But for the over 70 million people who lost work during the same period, the contrast could not be glummer.

American companies have acknowledged King’s famous exhortation that all people should be judged by the content of their character and not the color of the skin. It permeates the brochures and echoes in the advertising.

But their results have been anemic across the board.

Today, there is a palpable lack of racial diversity in the CEO and executive ranks of the Fortune 500, so much so that large institutional investors are mandating dramatic and unprecedented changes.

Nasdaq, for example, sought permission from the Securities and Exchange Commission to require over 3,200 companies listed on its stock exchange to have at least one woman and one diverse director, and also to report data on board diversity – or face consequences, perhaps of delisting.

Goldman Sachs CEO David Solomon announced a new standard for taking companies public: there has to be at least one diverse board member at the company.

MARTIN LUTHER KING, JR.: THE LIFE AND THE LEGACY

Vanguard, one of the world's largest investment firms, has called on companies to develop better reporting on the composition of their boards and to broaden their search for diverse director candidates.

All of these initiatives are well-intended but their success is not guaranteed.

The federal government does not yet have a mandate for racial diversity but the states are moving in an interesting direction. A number of states either have enacted or proposed initiatives to enhance gender and racial diversity on corporate boards.  These statutes are based on the research that diversity leads to improved financial performance and is a benchmark of good governance.

California was among the first states in 2018 to require gender diversity on boards of publicly traded corporations in the state. While the law has been challenged in both state and federal court, the premise has been established that government is now keenly interested in equality of opportunity. This approach has been embraced by Colorado, Maryland, Illinois, New York, Hawaii, Massachusetts, Michigan, New Jersey and Washington state.

Equality of opportunity in the legal profession also has been a perennial issue. Law firms, corporate clients, bar associations and individual leaders have debated, dissected and discussed solutions to increase the number of non-white law firm partners and senior corporate counsel for over thirty years.  And yet, the numbers remain abysmally low.

While diversity and inclusion in business is not a panacea in itself for the equality King sought, it is important nonetheless. Providing economic opportunity for everyone, regardless of race or gender creates a multiplier effect in society.  As income disparities close, so too can health, educational and housing inequalities.

As contracting, merger and strategic partnership opportunities for minority firms expand into all sectors, including banking, finance, technology and the professions, economic development for diverse communities moves from dream to reality.

The divisions which have become so prevalent in our society today will not gracefully dissolve tomorrow. Our progress as a nation will require men and women of goodwill to embrace not only this unique moment in time but also the mandate for equity in business, commerce and public affairs.

As the nation commemorates the legacy of Martin Luther King Jr., we should be reminded of his words that; "we may all have come on different ships, but we're in the same boat now."

With a political transition in place and a global pandemic in our midst, we also should remember King's advice that "the time is always right to do what is right."

Adonis Hoffman is CEO of The Advisory Counsel, LLC.  He served in senior legal and policy positions at the FCC and the U.S. House of Representatives.  He is the author of "Doing Good—the New Rules of Corporate Responsibility, Conscience and Character."