Two crypto enthusiasts just made a $10,000 Bitcoin bet on the next US president using a  smart contract.

According to a Sept. 8 post from podcaster Marty Bent, the Bitcoin (BTC) mainnet has seen its first ever discreet log contract (DLC), which he calls “a very important moment inBitcoin history”.

Fitting in with the general theme of 2020, the smart contract is highly political. Nicolas Dorier, a man who claimed to have made BitPay obsolete as a developer of BTCPay, made a bet using a DLC about the next winner of the 2020 Presidential Election in the United States: Donald Trump or Joe Biden. 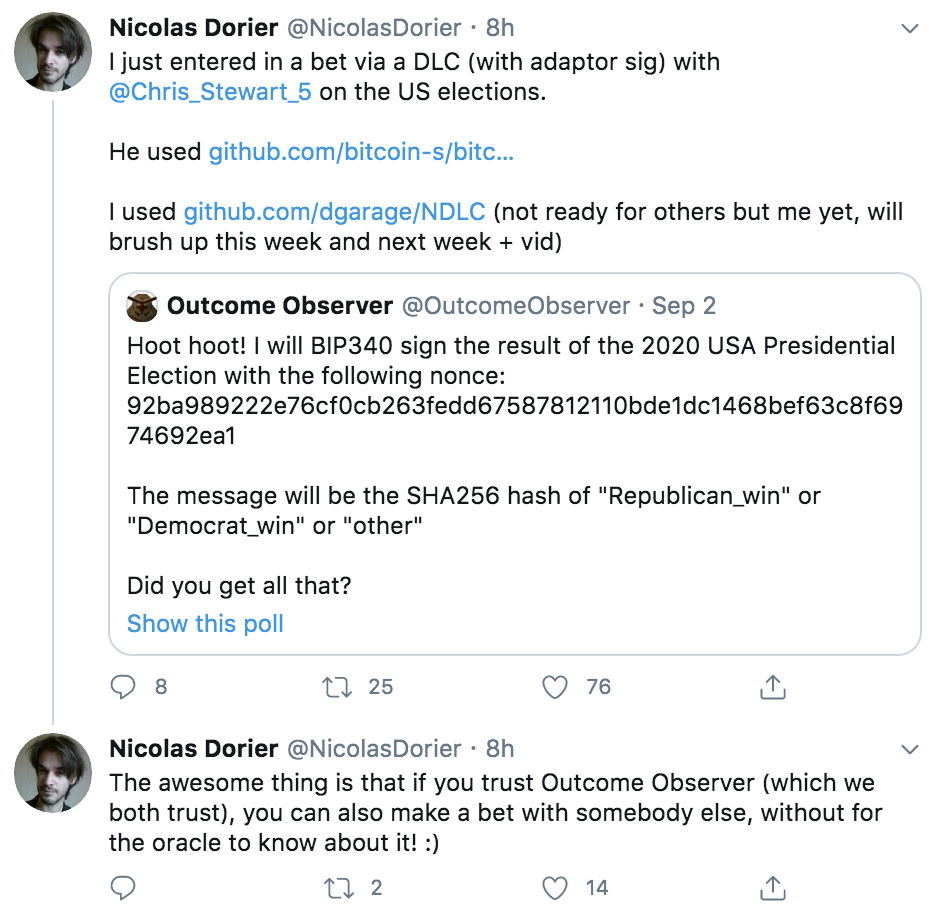 Dorier’s DLC offer, which can be viewed on Github, is between himself and Suredbits founder Chris Stewart, with Outcome Observer acting as a third-party oracle.

“When the election is finalized, the Outcome Observer will broadcast a signature that either I or Nicolas can use to settle the bet,” said Stewart. “If Trump wins, Nicolas will receive 1 BTC. If Biden wins, I will receive 1 BTC.”

The Bitcoin engineer seemed to have all possibilities covered, including full refunds for both himself and Dorier if a third-party candidate were to win. Even if the oracle was to somehow disappear:

We have signed refunded transactions that can be executed in March of 2021 that will give us our collateral back.

“I don’t think [Bitcoiners] need to concede that territory to Ethereum,” said Stewart. “There are plenty of powerful primitives in Bitcoin that allow you to do advanced applications with Bitcoin.”

Bent was similarly enthusiastic about the news, calling the smart contract bet a “massive” moment in the history of Bitcoin.

“DLCs may be the least appreciated ‘killer application’ of Bitcoin out there right now,” said the podcaster. “It will be very interesting to see the types of applications that begin to proliferate as more people come around to this type of smart contract.”

In an apparent rebuke to all those who criticize Bitcoin’s slow pace of development, Bent said it had clearly been paying dividends:

Slowly but surely, Bitcoin’s keep it simple stupid/slow and steady development approach is paying off in big ways.