Home » Economy » This Is Largest Wildfire in American History

This Is Largest Wildfire in American History 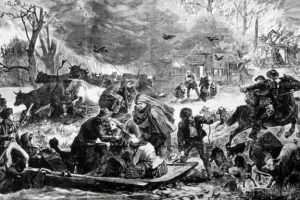 Wildfires have consumed 20,000 acres in California in the past several days, killed two firefighters in Arizona and spread throughout other states in part because of record heat that has risen well over 100 degrees throughout many of the western states. None of these compares even slightly with the largest and most deadly wildfire in history, which occurred in 1871.

The Great Peshtigo Fire covered 5,938 square miles. That is larger than the state of Connecticut. The land destroyed was in Michigan’s Upper Peninsula and northern parts of Wisconsin. Most of the damage happened between October 8 and 14. The fire was so long ago that no one can say for certain how it started. The theory is unattended campfires. It accelerated because the region was hot and dry in late summer and early fall that year.

The National Weather Service described the reasons for the Peshtigo blaze:

The fire in Peshtigo resulted from a number of factors, including prolonged drought, logging and clearing of land for agriculture, local industry, ignorance and indifference of the population, and ultimately a strong autumn storm system occurring in the presence of conditions supportive of a large, rapidly-spreading fire.

Eyewitness accounts include stories of people who caught on fire because of fire tornados caused by rising and swirling winds. Other people may have died in the extremely hot water of rivers caused by excessive heat. The fire is named for Peshtigo, a town in Wisconsin, where up to 800 people died. Accounts say the town was burned to the ground in an hour.

The fire was worse than it might be today. There were no firefighting experts to battle the spread of the flames with the use of modern tactics. These include attacking the hottest parts of a large fire or setting other blazes that clear land and keep the fire from spreading. There were no tanker planes to drop flame retardant and water.

People assume that fires, particularly the recent ones in California and Arizona, are larger than any in the past, and perhaps more deadly. Neither is true.