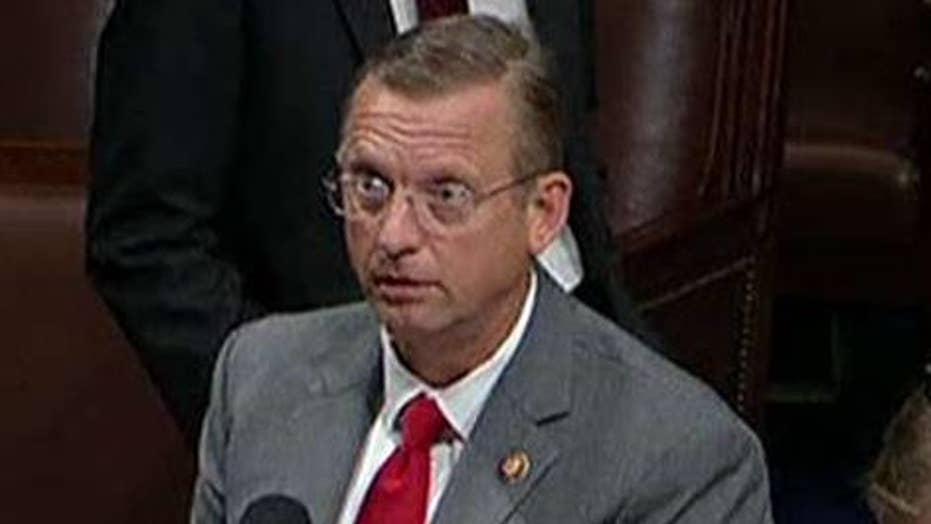 Georgia Republican Rep. Doug Collins says Speaker Nancy Pelosi used her party to avoid being punished for violating the rules after she called President Trump’s ‘racist’ on the House floor.

House Judiciary Committee ranking member Rep. Doug Collins, R-Ga., railed against House Speaker Nancy Pelosi and the Democratic Party after what he called a display that he said “brought dishonor on the House.”

This came after Pelosi violated the rules on Tuesday while delivering remarks on the House floor, by calling President Trump’s tweets “racist.” The House floor erupted in controversy when Pelosi used the charged description against the president, going against rules of decorum.

“She should not look back on this as a victory. It was a moment that frankly brought dishonor to the House, because … she was told she broke the rules, but what she forced her party to do was take away her punishment.”

The speaker’s words were in condemnation of a tweet from Trump where he said that four minority freshman congresswomen should “go back” to the countries they came from – despite three of them being from the United States – and fix their problems, “Then come back and show us how it is done.”

Democrats and Republicans spoke out against Trump for the tweets, with GOP Sen. Lisa Murkowski of Alaska saying there was “no excuse for the president’s spiteful comments.”

Pelosi claimed that she had presented her remarks to the House parliamentarian in advance to make sure that she was acting within the rules.

Collins called the Democrats’ majority “dysfunctional,” and said they “have done nothing except run roughshod over the institutional processes in the House.”

In addition to Pelosi’s behavior, Collins cited what he believes to be a pattern shown in the bills that Democrats are introducing.

“What I’m seeing is simply, they’re playing to a base. We’re seeing bills come to the floor that have inherent flaws in them that make them unworkable even if they were signed into law. They’re rushing stuff to the floor to feed a press release frenzy that their base wants to see and really at the end of the day they’re not getting anything done.”

Collins accused Democrats of not wanting to accomplish anything except “bash the president.”

The ranking member also spoke out against Democrats' efforts to continue pushing claims of obstruction of justice related to Special Counsel Robert Mueller's Russia report. Democrats are calling Mueller to testify on Wednesday, despite his public statement that he had nothing to say other than what is in his report.

"It's like going back and finding a book on the shelf that looks new, and then all of a sudden you begin to read and you find, 'wait, I've already read this before,'" Collins said, accusing Democrats of "going after things that we've already known."

Collins also accused Democrats of losing sight of what the Russia probe was about in the first place.

"The whole investigation started with the discussion of Russian interference in our 2016 election. It's almost like they forgot about that completely," he said. "But let me tell you, Republicans have not forgotten how, where the investigation started, and there's going to be a lot questions for what he did say, what he didn't say, and how this thing started."

House Judiciary Committee Chairman Jerrold Nadler, D-N.Y., told Fox News' Chris Wallace earlier on Sunday that he is not concerned with Republicans grilling Mueller, saying "If they want to debate or discuss this irrelevancy, let them waste their time." Nadler claimed it was important to have Mueller testify to discuss what the chairman believes is evidence that the president committed a crime.