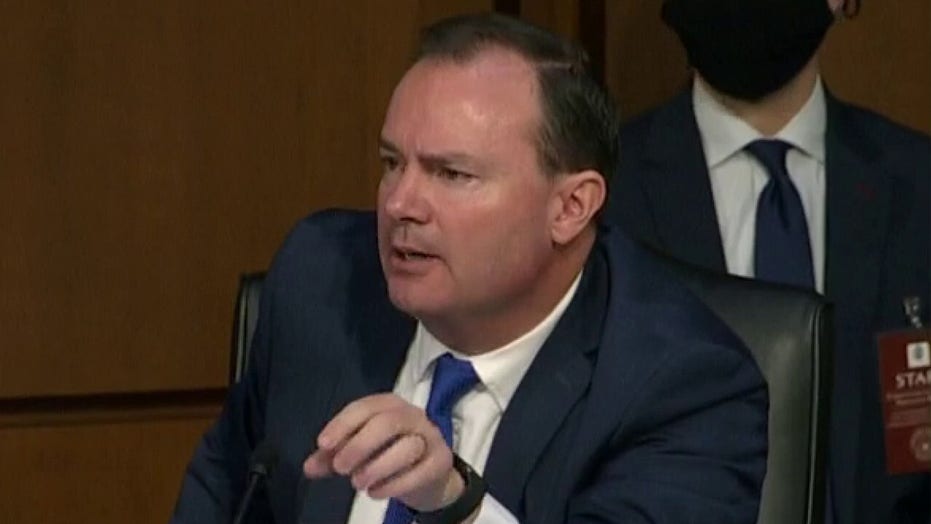 Mike Lee unleashes tirade against court packing, points to past Biden speech on the subject

Sen. Mike Lee, R-Utah, used the last seven minutes of his time allotted for questioning Supreme Court nominee Judge Amy Coney Barrett to rail against the notion of expanding the high court's roster, which some Democrats have suggests as a means to pack it with liberal justices.

Barrett herself did not say much on the subject, only to recognize that the size of the Supreme Court — currently nine justices — is set by Congress via statute.

"There are nonetheless good, prudential reasons having to do with respect for the separation of powers between the three branches of government, reasons that have over the last 150-plus years left us to leave that number at nine," Lee said.

Democratic figures such as Rep. Joe Kennedy III, D-Mass., and Sen. Ed Markey, D-Mass., called for doing just that as retaliation for Republicans rushing ahead with Barrett's confirmation before November's election. The Democrats made the suggestion under the assumption that they would take control of the Senate and White House after the election, giving them the power to change current norms.

Lee recalled that the last attempt by a president to expand the court’s roster and nominate multiple new justice — a practice commonly known as court packing — was by President Franklin Roosevelt in 1936. Lee noted that Roosevelt failed to achieve this, even though his fellow Democrats controlled the House and Senate with an “overwhelming supermajority.”

The Utah Republican went on to reference “a rousing speech that I recommend to all” from none other than current Democratic presidential nominee Joe Biden, who addressed the subject in the Senate in 1983. Lee recalled that Biden acknowledged that while the Constitution does not set the number of justices, it should remain at nine out of respect for the separation of powers.

“President Roosevelt clearly had the right to send to the United States Senate and the United States Congress a proposal to pack the court. It was totally within his right to do that. He violated no law. He was legalistically, absolutely correct,” then-Senator Biden said at the time. “But it was a bonehead idea. It was a terrible, terrible mistake to make. And it put in question, if for an entire decade, the independence of the most-significant body … in this country, the Supreme Court of the United States of America.”

Biden and other Democrats now suggest that it is Republicans who are trying to pack the court, referring to their efforts in rapidly filling judicial vacancies, which they have done with much success throughout President Trump’s term in office. Lee took exception to this message.

“In recent days I’ve seen some in the media and some in this body try to redefine what it means to pack the court," Lee said. "Some have suggested, well court packing takes various forms and it can mean confirming a lot of people all at once, some have defined it so as to suggest that it consists of that which the Trump administration and the Republican Senate have been doing over the last three and a half years, which is filling vacancies as they have arisen, and doing so with textualist, originalist judges. This may not be something that some like, but this is not court packing. Court packing is itself manipulative, it’s something that has great danger to do immense political and constitutional harm towards this mode of government in part because it would set up a one-way ratchet."

Lee explained that court packing does long-lasting damage because if "you create a position and confirm someone to that position," it cannot be eliminated unless the person filling the seat dies, retires or is removed via impeachment.

Lee also warned that if Democrats were to pack the court, it would set a precedent that would lead to Republicans doing the same the next time they have the power and opportunity to do so.

“You’d end up increasing it incrementally. Before long it looks like the Senate in Star Wars where you’ve got hundreds of people on there,” Lee said.

The senator claimed that any increase done for political purposes would “delegitimize the court,” and ultimately jeopardize protections such as freedom of religion and free speech that are at times unpopular.

Biden — despite speaking against court packing in 1983, and even saying during a 2019 interview that Democrats would "live to rue that day" if they did it now — refuses to answer questions about his position on court packing. Lee argued that there is only one reason why he will not address the issue.

“There’s a reason he’s not saying whether he would do it," Lee said. "There’s only one reason why you refuse to answer that question. It’s if you’re wanting to be able to do it but you don’t want to take the heat for the fact that you’re thinking about doing it right now.”